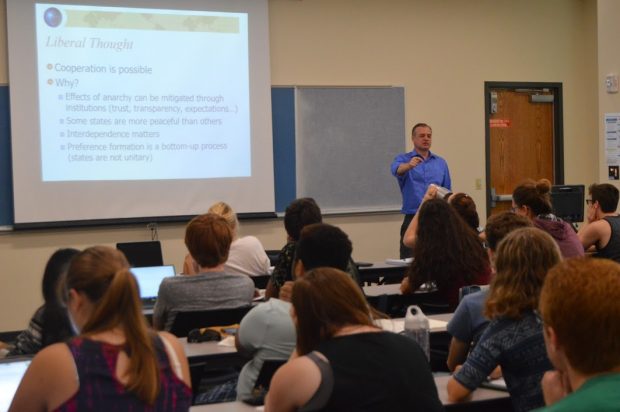 New College associate Professor of Political Science and Environmental studies, Frank Alcock, is hoping for an upset in the Republican-favored Florida race for the 23rd District of the Florida State Senate. Alcock, who has been a professor at NCF for 13 years, has, and will continue to, campaign hard. These efforts have included flipping into a pool on tape and hunting Pokemon with constituents. Alcock will also be doing an over 100 mile bike ride to garner votes. In his first political campaign, he is running on a stance of “common sense” politics as well as a return to “sanity and civility.” Since winning the democratic primary on Aug. 30, Alcock will go on to compete against Republican Greg Steube for the senatorial seat.

“He has held positions as a senior U.S. Fulbright Scholar to New Zealand, a senior fellow within Florida’s Collins Center for Public Policy and a Belfer Fellow in the Kennedy School of Government at Harvard University,” it states on the NCF website. “[Alcock] also spent five years at the U.S. Department of Energy.”

While teaching at the New College of Florida, Alcock, a husband and father of two, has also been an active member of Sarasota.

“[I’ve been involved with] ABC 7 and Mote [Marine] connecting some of the things they do to action,” Alcock said.

Alcock is passionate about environmental issues. He has done research work for environmental think tanks and working to make a positive difference.

“The environment is what I am most known for,” Alcock said. “That’s why I was hired [at New College]. There is not one environmental issue, there are many.”

respect the will of voters on land conservation initiatives.”

He plans to focus on health and economic issues. He believes that the state is not doing enough to ensure that people have access to health care.

“The most important [issue] would be healthcare access for underprivileged populations.”

Alcock listed a way to improve medical care would be to expand Medicaid with federal government money, but he explained that even then there would be a gap for those who make too much money to qualify for Medicaid, but not enough for Obamacare. He hopes the healthcare act would be able to cover those people. Alcock intends to overhaul this system.

Alcock said he hopes to work on making education more accessible for all children. He said that he will work to make it so all students are reading on grade level by third grade.

Despite the fact there were three more Republicans running for the seat than Democrats, Alcock believes he stands a chance.

“There is a majority of people that would prefer a more moderate candidate or a progressive candidate that could work across the aisle,” Alcock said as he explained why he believed he could win. “[Many voters] would prefer that to a more staunchly conservative candidate.”

“It’s an important moment, not only for the country but certainly for the state,” Alcock said. “This particular seat is one in which I think I could make huge difference.”

Alum Patrick Bon Tonnissen served as Alcock’s campaign manager before heading off to a Fulbright in Germany last month. Tonnissen explained that although he had never taken a political science class with Alcock, or in general, at New College, he had been very active in organizing for the Bernie Sanders campaign. His responsibilities included running a fundraising program of donor research and call time, recruiting and training volunteers for phone banking, canvassing, producing call sheets, and learning the ins-and-outs of VAN (Voter Activation Network), a progressive campaign software.
“I was approached by Frank in late May to come aboard the campaign full-time with an undefined role,” Tonnissen explained. “He had planned to hire a seasoned campaign manager but each candidate for the job fell through, so I finally left my job as a banker and was pleased to have my passion pay the bills.”

“I got amazing experience building and running an NGO (Non-Governmental Organization) with a goal of creating a structure that would ensure past my August 15th departure,” Tonnissen said of his experience. “If there’s one thing I’ve learned from my time in progressive campaigns, it’s damn hard to ask for and even harder to receive commitments for someone’s time, even for the best of causes. When you do find people willing to sacrifice what leisure time they might have for the service of others, it’s crucial to build those people up and make it known and felt that they’re invaluable. It all comes down to relationships and common cause.”

An alum who is currently working with Alcock’s campaign is Aamna Dhi. She is responsible for photos, graphics, communications and the campaign website.

“I had written my thesis on social media as a tool for social movements, specifically how social media has been used to mobilize the masses around political and social causes,” Dhi explained. “Dr. Frank Alcock was on my thesis committee, and my sponsor Dr. Barbara Hicks suggested that Alcock use my skills and knowledge of social media to assist his campaign.”

Dhi expressed that she was excited to learn, first hand, about the political process. She will be involved with the campaign into November, since Alcock has won the Democratic primary.

“It is one thing to read about campaigns and then entirely another to actually be a part of one,” Dhi said.

The vote for the seat will be held on November 8th. For information on how to vote go to http://www.sarasotavotes.com/