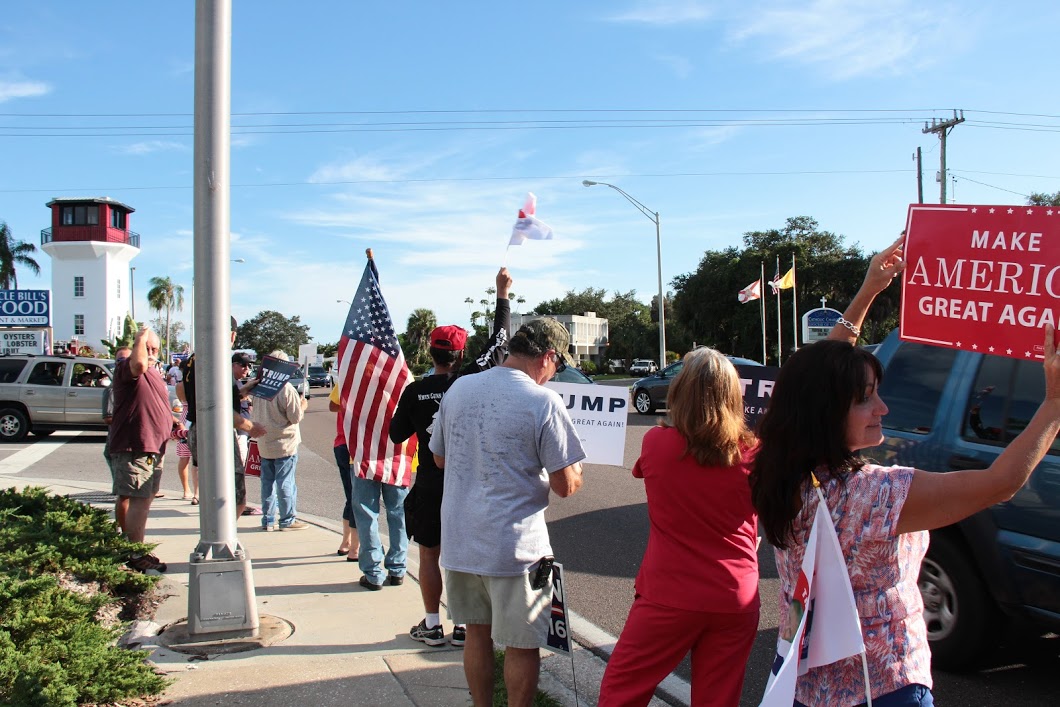 The nationwide fervor over the presidential election has impacted Sarasota in more ways than one, but the debate over democratic nominee Hillary Clinton and republican opponent Donald Trump hit very close to home for many New College students last week.

Local restaurant Barnacle Bill’s – which is less than a half mile from the Pei dormitories – prompted clashing rallies over its marquee sign which earlier this week read: “[National Rifle Association] NRA Member” “Concealed Carry OK” “I am a Deplorable” “Vote Trump.” Restaurant owner William “Bill” Davis later changed the sign to say “Not a Deplorable.”

The marquee has been the topic of conversation and criticism since Davis decided to vocalize his political views on the restaurant’s roadside sign. He has received thousands of emails in support and opposition of his actions. He’s even received death threats, to which Davis responded, “I’m an NRA member, I’ll protect myself.”

The action came to a peak, however, when supporters of Hillary Clinton planned a demonstration at 5 p.m. last Wednesday, Sept. 21 on U.S. 41. This was soon met with plans for a counter-protest by local Republican leaders. At 5:30 p.m. nearly 100 Trump supporters faced about 15 pro-Hillary chanters across the way.

Thesis student Saif Iqbal showed up to the demonstration on the advice of NCF Democrats President third-year George Thurlow.

“I saw [the road sign] online, and was honestly heart-broken,” Iqbal said in an email interview. “I love Barnacle Bill’s, best shrimp pasta in town. I have no hate or malice for Trump supporters, but it honestly just makes me sad at the current state of our country/state/city/community.”

While many of the protestors on either side remained civil, others attempted to interface with their opponents. For the duration of the rally, Sarasota Police were stationed on either side of U.S. 41, occasionally announcing on a megaphone for protesters to stay off the medians.

“I came to the rally and grabbed a sign and stood quietly next to another person who had a rainbow colored sign,” Iqbal recalled. “A Trump supporter, taking video the whole time, decided that it was the perfect opportunity to instigate.

“He began asking the person holding the rainbow colored sign about Sharia law and Hillary’s plans to allow Sharia law into America.” he continued. “They asked about gays and lesbians being executed in Islamic countries and went on a for a while before another Hillary supporter came up and got in the Trump supporters face. ‘Why are you suddenly talking about and bringing up Sharia law? Is it because this young man here is Muslim or looks Muslim?’ At which point I just started cracking up laughing, because it was so incredibly obvious, and the Trump supporter just grinned evilly and left.”

The usually empty parking lot of Barnacle Bill’s was packed – but not with folks looking for happy hour and a crab cake. Instead, an RV emblazoned with “Trump Pence 2016,” a firetruck and a large cardboard “basket of deplorables” filled the lot. Inside the so-called basket were Trump supporters waving signs and chanting “Hillary for Prison.”

The sign and cardboard basket were in response to a comment made by Hillary Clinton in her speech at the LGBT for Hillary Gala on Sept. 9 in New York City. Clinton characterized half of Trump’s supporters as a “basket of deplorables” – racist, sexist, homophobic, xenophobic and Islamophobic. The other half, she said, was a basket of people “who feel that the government has let them down, the economy has let them down” and they are “desperate for change.”

“There’s some deplorable people who support Trump,” Iqbal said. “White supremacists, racists, Islamophobes, xenophobes, you name it. But at the same time, a lot of Trump supporters are just uneducated people who feel like they’ve been taken advantage of their entire lives and are looking for something different.”

Later, Clinton commented that her remarks were “grossly generalistic” but did not cede that many aspects of Trump’s campaign are deplorable, citing his support from white supremacists, his use of prejudice and paranoia, his attacks on public figures due to their faith or heritage, and his racist rhetoric.

Although this local controversy quickly escalated and received public attention, this is not the first time Barnacle Bill’s and its management have exhibited strong political views or discriminatory behaviors.

Thesis student Meghan Cromie worked as a host at the seafood restaurant during her third-year. Seeing the pro-Trump marquee, Cromie recalled many experiences in her time there that make Barnacle Bill Davis’ famous sign less surprising.

Cromie recalled that the owner “is very much pro-Trump and talks about it to anyone willing to listen.” In less than a year of employment, Cromie witnessed Davis attempt to kick out a black client for wearing shorts despite other customers in casual attire, discard resumes from black applicants or those with “black-sounding” names, and refuse to hire a Hispanic hostess (because she did not resemble Cromie or other white-passing hosts).

“It was a big gamble on my part, because usually dealing with the public, I try to sit on the fence and not take sides,” Davis told ABC7 about his decision to put up the sign. “I just couldn’t do it anymore.”

In front of Barnacle Bill’s, armed with a megaphone, Hillary supporters chanting “love trumps hate” attempted to overcome the volume of the various pro-Trump voices.

“There were way more Trump supporters than Hillary supporters,” Iqbal said. “Doesn’t seem like Hillary is really inspiring much from the people. We couldn’t even get a decent chant going. All in all 6/10 protest.”

Davis told WTSP that he has no plans to remove the controversial marquee before the election, instead planning to replace it with “Congratulations President Trump” on Nov. 9.

Information for this article was taken from politifact.com, wfla.com, heraldtribune.com, wtsp.com