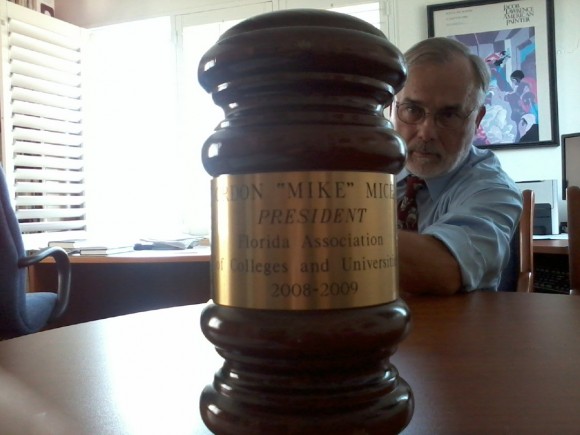 With some relief, President Gordon “Mike” Michalson presented his annual State of the College Report and Statement of Priorities for the coming year to the Board of Trustees for the last time.

In the report, Michalson highlighted the school’s successes of the past year, namely New College’s 50th Anniversary — which brought in nearly 1,500 alumni — and the newly opened Academic Center. He made a point to commend the college’s progress in spite of the “sobering financial challenges” facing many public schools of higher education today. The Statement of Priorities for 2011-12 described Michalson’s proposed objectives for the new school year.

“The goals for the year are usually a mix of short-term [and long-term] issues,” Michalson said. “I’m going to help with the recruitment of the [new] president even though I have nothing to do with the search. With luck that’s a one-time deal — hopefully we’re not doing that every year.

“But other things like internationalizing the campus — that’s really been ongoing since 1993,” he continued. “Over time, we folded into that ideal of diversifying the curriculum, student body and staff. As you well know that’s a slow, difficult process.”

Just one day before his interview with the Catalyst, Michalson issued a message to the New College community addressing a recent racial epithet causing uproar on the student forum and spawning, as he put it, “comments that not only cause deep and direct hurt to fellow campus citizens but also demean the entire New College community.”

According to his Statement of Priorities, Michalson plans to meet these issues with the funding of the International Studies Center and the creation of a President’s Advisory Committee on Diversity. The committee composes of faculty, students, members of both the Board of the Trustees (BOT) and the Gender and Diversity Center (GDC) and more.

Though Michalson will step down from presidency next year, he will rejoin the New College faculty and thus takes a healthy amount of interest in the search for his successor. “[I want] someone who’s competent and knows how to walk and chew gum at the same time,” he said when asked about his ideal candidate.

An issue no doubt to be on the next president agenda is the financial difficulties and severe budget cuts New College has undergone. Rather than a fleeting rough patch of economic stress, Michalson believes New College is in for a fixed transformation to counter the crisis.

Michalson called New College’s forced 3 percent reduction in all staff and faculty salaries as part of the government’s new retirement benefits system, “A slap in the face of hardworking educators.”

“Our advantage of course is that we’re small and so the amount of money that would be a major gift for us, like a nice million dollar gift, really has an impact,” Michalson claimed. “If you give a million dollars to Harvard, you’re not going to get a thank-you note.”

In comparison to today’s troubled times, Michalson recalled when New College first gained its independence as a state university a mere 10 years ago.

“As someone who’s culminating my 10th year — and by the time I’m out of here — my 11th year as president, I’m looking back and thinking, ‘Times might be tough, but look back to when we started,” he said. “Our Board Chair didn’t think we’d survive.’”

With the successful celebration and turnout of New College’s 50th anniversary, Michalson appears optimistic about the school’s relationship and dependency on Alumni.

“We’re working hard to engender more generous habits of giving especially from those donors who have the greatest capacity,” Michalson said. “Typically in a liberal arts college, most of your annual giving comes from alumni. We’ve never had most of our annual giving from alumni. We’ve always had most of our annual giving come from people who live in Sarastoa. We want to keep that stream of giving from Sarasota going while improving the ratio of alumni giving and we’re in a good moment to do that.

“It’s sort of an easy sell when you … see the faces and hear the stories,” he continued. “It’s really a matter of just reminding people of something that they kind of know and saying, ‘We’re not just bucking you about writing a check, we’re asking you to invest in something that you yourself admit was important to you.”