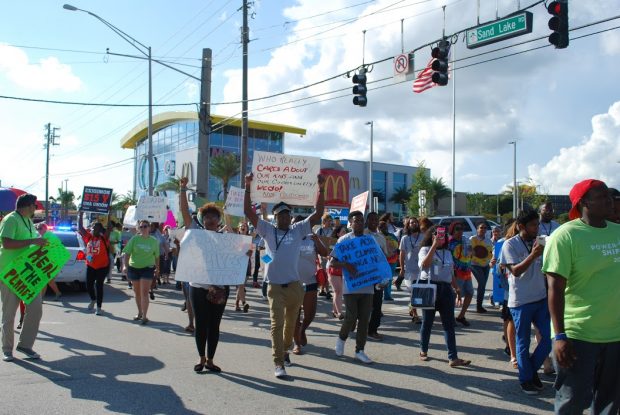 Students and young activists from all corners of the Southeast United States came together at the 2016 Regional Power Shift Conference held in Orlando this past weekend. Organized by the Power Shift Network (formerly the Energy Action Coalition), Power Shift provided a space to open up multi-faceted discussions on climate change.

The weekend kicked off on Friday with the opening Plenary, which addressed how to build a “safe space” that holds equity and justice at the forefront. Afterwards, Power Shifters were invited to a community art build to create signs and banners for Saturday’s direct action march on the world’s largest McDonald’s off International Drive.

Power Shift has been in gear since 2007 but this year’s convergence stood confidently apart from it’s predecessors. For the first time, the Power Shift Network was able to assemble four regional conferences: Southeast, West, Midwest and Northeast.

“We were very intentional around what we wanted to do being that this is the first regional set up versus national so we thought about the issues in the Southeast and how they relate back to the host state, Florida,” Yulissa Arce Orlando director for the Florida Institute for Reform and Empowerment (FIRE) said. Arce was a speaker on the (em)PowerVote Plenary which addressed voter power and how to strategically shift politics to boost the issues.

“I think a regional powershift is really important because it’s like identity and place and it’s easier to identify your role in the movement when you’re in your place right here,” Nat Sassine, a junior at the University of North Florida, said. Sassine attended Power Shift back in 2013 when it was still a national convention and recognized a stronger direction with the regional set up.

An unmistakeable theme for this year’s Southeast Powershift was intersectionality. This focus was threaded into every workshop, every conversation. Even at the direct action march one could hear chants familiar to movements such as Black Lives Matter, Fight for $15 and the Alliance for Fair Food.

Elle Hearns – a lead organizer in the Movement for Black Lives – articulated the theme eloquently in her keynote speech. “As we move through the world, fighting for liberation, it is our people who we are responsible to. It is ourselves that we must challenge. We do have to choose whether or not our movement will be in isolation or in collaboration with other movements.”

Practically every workshop either centered itself in the cross-section of two movements or offered an intersectional approach to a particular issue. “Reproductive Justice is Environmental Justice,” “A World Without Racism” and “The Impact of Harmful Trade Deals on Climate” to name a few examples. Miami native Valencia Gunder challenged her audience in “Climate Gentrification” to take obstacles head on to achieve a better, more just society.

“She told us to hold people accountable like our local commissioners and she told us about getting involved in resiliency planning in our community, which I definitely want to look into in Sarasota,” Catalyst staff writer Cassandra Manz said. “She talked a lot about equity, not equality and saying that different people and different communities need different things.”

Power Shift received a strong presence from New College with more than a dozen students in attendance and a workshop held by fourth-years Jay McWilliams and Orion Morton on “Restorative Ecology for a More Just Climate.” McWilliams and Morton offered three techniques of land and soil restoration: community-based bioremediation, phytoremediation and mycoremediation.

While accessible and innovative to all, their presentation impacted one audience member in a particularly powerful way. John Gakumba attended Power Shift to find and invest in ideas to bring back to the Nile Basin Initiative, an intergovernmental partnership around sustainably managing the Nile River basin.

“I come from Rwanda, that’s East Africa, and we have a lot of food security challenges so restoring land and a system of resources is the way to provide food sustainably so that’ll affect the soil life and the need to have more organic life in the changing climate,” Gakumba said. “So they said John, maybe you could find an event, a session that will be of interest that you can contribute. This is the one, I really like it. I took their contacts and I’m going to get that book.”

The book that Gakumba referred to is Earth Repair: A Guide to Healing Toxic and Damaged Landscapes by Leila Darwish. Morton and McWilliams attributed much of the content in their powerpoint to Darwish’s book.

The conference hosted more than 20 workshop sessions and each one got down to the nitty-gritty of a particular issue, facilitated solution-focused discussions and offered hands on training for skills such as mobilizing a community and navigating the political system.

In “Beyond the Campus: Building Statewide Power,” speakers Evan Weber and Matt Cordiero offered a five-step plan to making a vision reality and broke the audience into groups to test out different ideas. “Why Food is Important” had a simpler answer to the issue of food security: grow your own! Participants were given biodegradable pots to plant tomato, carrot or radish seeds for an empowering push.

Throughout the conference, the theme of intersectionality never faltered. In her speech, Elle Hearns gave a humbling reminder to Power Shifters that it is praxis that changes the world.

“There’s a lot of mentioning of intersectionality here, which is great. However, the actual practice to manifest this is not always one that is realized or introduced in intentional ways in community spaces that we all engage in together. It’s time for us to actually choose how we practice being a community.”