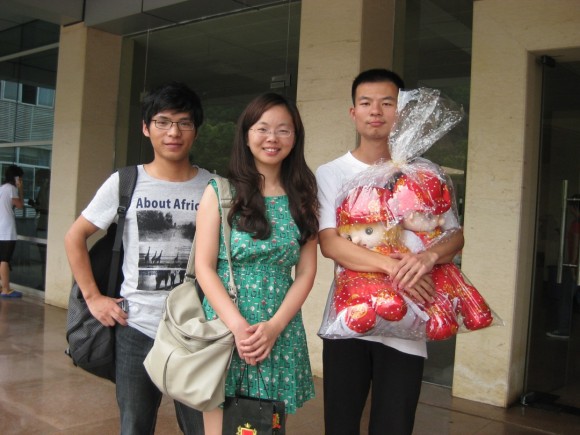 Juan Wang (left) and two of her students in China hold gifts given to Wang at a farewell party thrown by her students at the end of spring semester.

While approximately 83 percent of its 836 students are counted as in-state residents, New College is not exactly known for its diversity of backgrounds. However, the school is making efforts, despite limitations, to expand its horizons. NCF hosts foreign students in order to perpetuate a growing trend of diversity in the so-called “bubble.”

Dominique Held visits this semester from the Trier University-Birkenfeld Environmental Campus in Germany, where he is a third year studying Economic Engineering. Held’s university has exchanged with NCF students since 2005. The program began as a biotechnology exchange sponsored and organized by an NCF professor.

“Once the grant for that program ran out, we wanted to keep the relationship going,” Career and Off-Campus Studies director Cathy Cuthbertson said. “It expanded to include the Liberal arts curriculum, not just sciences.” While the partnership with Birkenfeld has brought consistent exchanges, it is only one example of a myriad of ways in which students from abroad can enter New College.

One can imagine that on-campus life at NCF is a big change from other, larger universities, with more commuters and a big city environment – but what might seem exciting and new to some is quite ordinary to others.  “I wanted to come [to the US] because I wanted to improve my English and be out of my comfort zone,” Azinatya Caron-Paquin, who is a fourth year at the University of Quebec in Montreal, said. Caron-Paquin came to NCF via National Student Exchange’s (NSE) partnership with Canadian universities, and is an International Relations major. “I think the US has an important place in the study of international relations … I wanted international courses taught by people who are from here.” Caron-Paquin also said that she wanted to get the experience of the way courses are taught in the United States.

“We would like to increase and build the number of international students… but it’s an expensive process,” Coordinator for Multicultural and Transfer Recruitment Ann Quinn explained. “The logistics of completing the application can be a difficult process.” Students coming from outside the country, specifically those not on exchange programs, must go through a extensive procedure of getting insurance, getting transcripts translated and evaluated and taking the required SAT/ACT as well as the Test of English as a Foreign Language (TOEFL), which evaluates the ability of an individual to use and understand English in an academic setting

While the cost of attending New College for international transfer students is upwards of $43,000 a year, Quinn explained that international recruitment is also an expensive feat for a small institution such as New College.  Part of her job is to send out informational packets to universities abroad, but unlike other, larger institutions, New College is simply not big enough and does not have the resources to have ambassadors in many countries.

“New College has such a great reputation, but as we find with other parts of states in the US, not many people know about it,” Quinn explained. “I think the same thing is true of international students – sometimes they find out through contacts such as family members … it’s just getting the name the same recognition you do in the larger, more well known universities.

While it is true that a large percent of Novo Collegians break out of the confines of on-campus study at some point during their university career, the campus doesn’t see much traffic coming from the outside. “We have an intrepid population here. [NCF students] are adventuresome, they want to break out and pioneer new ground,” Cuthbertson said.  “We cannot bring as many in as would like to come here, mainly because of space and just being such a small school … having such a small staff to manage [NSE] creates necessary limitations.”

“Do you know ‘culture shock’?” Juan Wang, a Fulbright Teaching Assistant (TA) from Shaoshan, Hunan Province, China asked.  “First you’re excited day by day, but then you will reach the peak, then it’ll fall down, then you’re at the lowest point, then it’ll get better and then it will be steady.”

“I am at the ‘falling down’ stage … maybe because of the stress,” Wang said.  In addition to her Chinese TA position, Wang is in two classes – a Jane Austen lit course and Beginning French. Wang described another part of culture shock – language barriers.  “I’m feeling a little frustrated with language,” Wang said. “Sometimes I feel bad when I can’t understand what my friends are saying, but most of the time I can guess.”

Despite these seeming drawbacks, Wang expressed that she has had a positive experience. “It’s nice when you’re walking, you can always meet someone and say hi,” she said. “I would never feel lonely here, they told us not to get isolated, but it’s impossible to be isolated here!”  Wang said she also “really enjoyed Ringling museum … and the sunset” but was surprised to find “there’s so many lizards here.“

Caron-Paquin said she was surprised by the consumerism she’s seen at the stores here. “I went to buy an eraser, and it was wrapped in plastic, inside another plastic case, attached to cardboard!” she said. However, she has had a “very positive experience … I am already thinking about how I can come back for grad school.”

Just as Held said most people assume people from Germany wear lederhosen (when in fact they do not … just on “special occasions”), breaking down barriers within New College brings both nationals and internationals to a new understanding of the global community, and that we could possibly have more commonalities than differences.