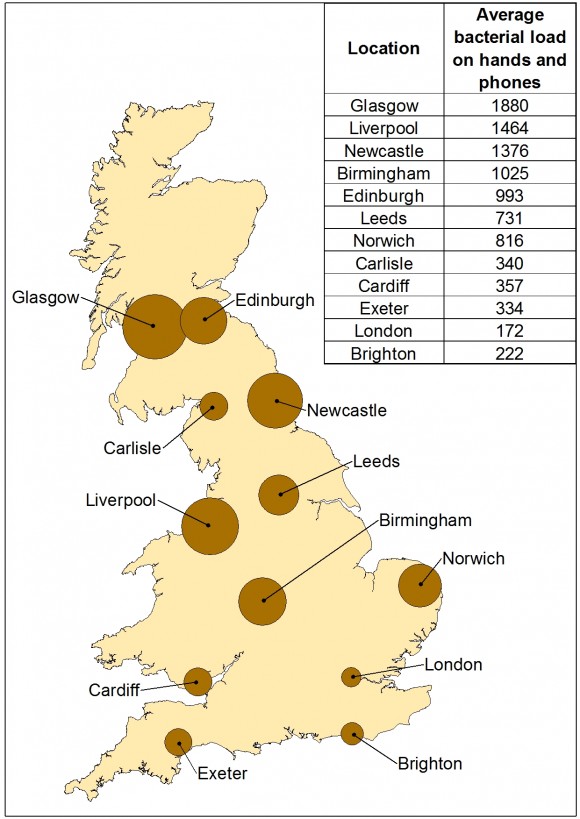 Levels of all bacteria found on hands and cell phones in the U.K. The researchers found that generally, cities in the north such as Glasgow showed greater levels of hand contamination than southern cities such as London.

Your new iPhone is just as crappy as your old flip phone, unless your hygiene habits have improved.

Experts found that one in six cell phones in the United Kingdom is contaminated with fecal matter, which was likely transmitted to the phones by unwashed hands. These results are not unique to the British.

“I believe there have been studies in the U.S. with similar results,” Valerie Curtis, one of the researchers from the London School of Hygiene & Tropical Medicine, said. “Whenever studies have looked at hand contamination in different countries, the results have not been that different.”

“We found indicators of fecal contamination,” Curtis said. “That means that people are coming out of the toilet and then handling their mobile phones and not washing their hands with soap, which means that if they did have pathogens in their gut, if they were sick with Salmonella or E. Coli 0157 or any of the dangerous pathogens, then those pathogens would be passed on to everything they touch, not just their mobile phones.” Curtis explained that the E. Coli found on the hands and phones is not a pathogen and would not cause sickness, unless the owner did in fact carry a pathogenic strain. “The problem is that over a million children a year die [whose] lives could be saved if hands were washed with soap regularly,” she said.

“There was an even higher concentration of Staphlococci, which are skin contaminants,” Ronald Cutler, one of the researchers from Queen Mary, University of London, said. “Now surprisingly, despite all the evidence to the contrary, 95 percent of people said they wash their hands with soap and water on a regular basis.”

Curtis and Cutler sent university students to 12 cities within the U.K. by train. At the train stations, students took swabs from hands and phones of 30 to 40 participants from each city. They asked participants about their hygiene habits and later cultured the swabs for total bacterial count.

Bacteria from phones can be transmitted to anyone who uses them. “If maybe you washed your hands once and didn’t bother being very good about washing your hands any further than that, you could reestablish the fecal flora back on your hands whenever you picked up your mobile phone again,” Cutler said. “Now we do know that people do exchange phones … and there’s always a possibility if someone was carrying a pathogenic strain of E. Coli … and passes the phone, that the person you pass the phone across to, you could easily transmit the organism as well.”

According to Curtis, any type of soap is fine to use for washing hands.  “I’m not too bothered how people actually do it,” Curtis said. “We don’t have to be like surgeons and scrub our hands, the main thing is to just remember to do it.”

The study has not yet been published, but the preliminary results were released on Oct. 15, the date for Global Hand-washing Day (GHD) this year. Both Curtis and Cutler are founders of GHD, which works to promote hygiene around the world.

“We just want to gross people out into washing their hands with soap,” Curtis said. “That’s the main objective of the study, really.”