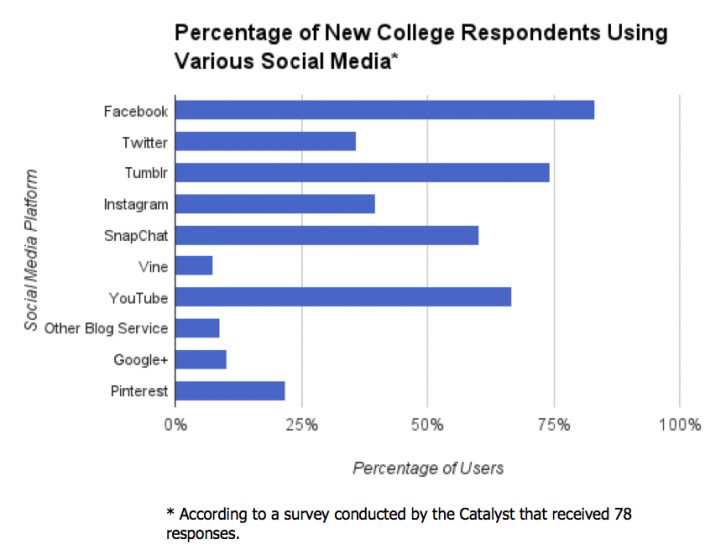 A survey by CourseSmart and Wakefield Research in 2011 reported that 38 percent of college students cannot refrain  from checking one of their devices for more than 10 minutes. In fact, according to a survey conducted by re:fuel College Explorer in 2013, students have an average of 6.9 technological gadgets. Even outside of academics, technology molds many facets of a typical college student, specifically their social life. Social media in particular provides instant connectedness to friends on campus and to family at home.

“There’s definitely a social web here,” Educational Technology Services Coordinator Allen Goldberg said in reference to the synergy between various social media platforms available to college students. “These things really do feed off each other. Half the things you see on Twitter are links to other things like Instagram or Facebook… and half the things on Facebook are links back to Twitter and again Instagram.”

Information Technology and Educational Technology Services has conducted a study on the incoming 2013 and 2014 classes during Orientation Week about device and social media preferences.

“There’s been consistency over the past two years, other than that Google+ is dead,” Goldberg said, reflecting on the surveys’ results. No one surveyed during the Orientation Week 2014 sessions said they used Google+, down from the 7 percent in 2013.

“I feel like it’s a poorly laid out, harder to use, empty version of Facebook,” first-year student Wes Harper said about the site.

“You can’t get that with group chat,” he continued.

Goldberg thought that Facebook has done a good job with its messaging capabilities, citing the new separate messenger app for mobile and tablet devices. “I mean it’s Facebook but it’s not. It’s using your Facebook contacts list, and thats really it,” he said.

Harper agreed. “I thought the Facebook messenger app was meaningless until I got to college, but then I stopped getting cell signal so I discovered its purpose,” he said. “If they don’t have iMessage, I Facebook message them. Sometime people text me, and I reply with a Facebook message. I have WiFi, not cell signal.”

Chief Information Officer Ryan Noble said that based on what he has read in the news, he does not see the Facebook user statistics increasing anytime soon. “I think it’s going to level off,” he said.

SnapChat has surprised many with its massive emergence onto the social media scene, amassing use from 26 percent of those surveyed in the cohort of 2014. This is magnified in results from the Catalyst poll, which projected 60 percent of the respondents using the app. “It’s interesting to see where that goes next year,” Goldberg said.

The Catalyst poll also showed that 74 percent of respondents used Tumblr, about 50 percent more than those surveyed in the Orientation Week surveys for 2013 and 2014.

“I try to stay agnostic when it comes to all this stuff,” Noble said. “I figure you have to know a little about all of it, including hardware and operating systems, and what people are using for social media, so we can support and help you guys out.”

Information for this article was gathered from http://www.globenewswire.com and http://mashable.com