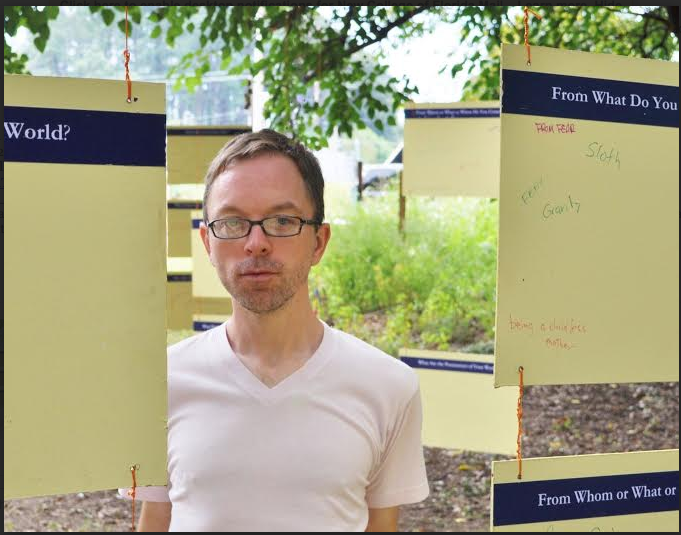 Tod Edgerton describes his "Vitreous Hide" as a meditation on wanting to feel connected and present in both the human body and the world.

When Michael Tod Edgerton took creative writing courses in college, he did not view the professors and the resources as the most valuable part of his experience. For him, the best part was the community of fellow writers. This semester, Edgerton is creating and teaching two creative writing workshops of his own for writers, both beginning and experienced.

Originally from Lexington, Kentucky, Edgerton fostered a love of writing during his early adolescence.

“I think it coincided when I was thirteen and I stopped believing in God,” Edgerton said. “I turned, almost simultaneously, to philosophy and poetry. It’s always been sort of in my brain, since, to find out what is true. I needed to fill this void that had now become a center of my universe. And I turned to philosophy and poetry as modes.”

Edgerton was originally inspired by what he described as the “lyrical, musical” quality of poetry. Some of the first works Edgerton created at 13 and 14 were songs. It was his 10th grade English teacher who, upon viewing some of his work, encouraged him to get involved in his high school’s literary magazine.

When Edgerton graduated from high school, his immediate plan was to study English Literature. A plan that lasted for the duration of a semester. He became interested in post-structuralism, critical theory, gender studies and contemporary philosophy and would switch to a self-designed major.

It was also during this time of self-exploration that Edgerton decided to take a break from writing in order to pursue these interests. “I just didn’t think poetry could change the world. I didn’t know why I thought theory would and poetry couldn’t,” Edgerton said.

Edgerton would refuel his love for writing during a particularly difficult time in his life when writing then become a means to vent and express what he was going through. He decided to pursue both a Masters of Fine Arts (MFA) in Literary Arts at Brown University in 2006 and a PhD. in both English and creative writing at the University of Georgia in 2014.

“I think that writing is a part of my DNA, whether literally or figuratively, that I’m drawn to language as a medium for art,” Edgerton said.

During this time, he began publishing his works, which have appeared in publications such as the “Boston Review” and the “Denver Quarterly”.

His first collection of poetry, titled “Vitreous Hide,” was published in 2013. Edgerton describes it as a meditation on the experiences of wanting to feel connected and present in the body.

Edgerton was able to combine his love of writing with his love of teaching through the various courses that he has taught. He views teaching as a way to cater to the specific needs of each type of student.

Edgerton is currently teaching Introduction to Creative Writing: Explorations Across Genres for beginning writers and Ek-Static Ekphrastic: An Inter-Arts Writing Lab for more advanced students. Despite the differences between the workshops, a common theme is the practice of revision.

“It is enjoyable to have students develop as thinkers, critical and creative, alike,” Edgerton said. “And, especially with creative writing, to develop their talents and connect more with their creative capacities, even if they’re never going to be a professional or published writer. I think it’s really important for everyone to have some type of creative outlet and writing is an easy one.”

Edgerton hopes his students will gain something valuable from the experience of these two workshops that they would not have received otherwise.

“Obviously, you don’t have to take a single creative writing class to be a writer. The best thing about a workshop for me really isn’t the professor,” Edgerton said. “Ultimately, I think, they function as another, much more experienced reader in the class.”