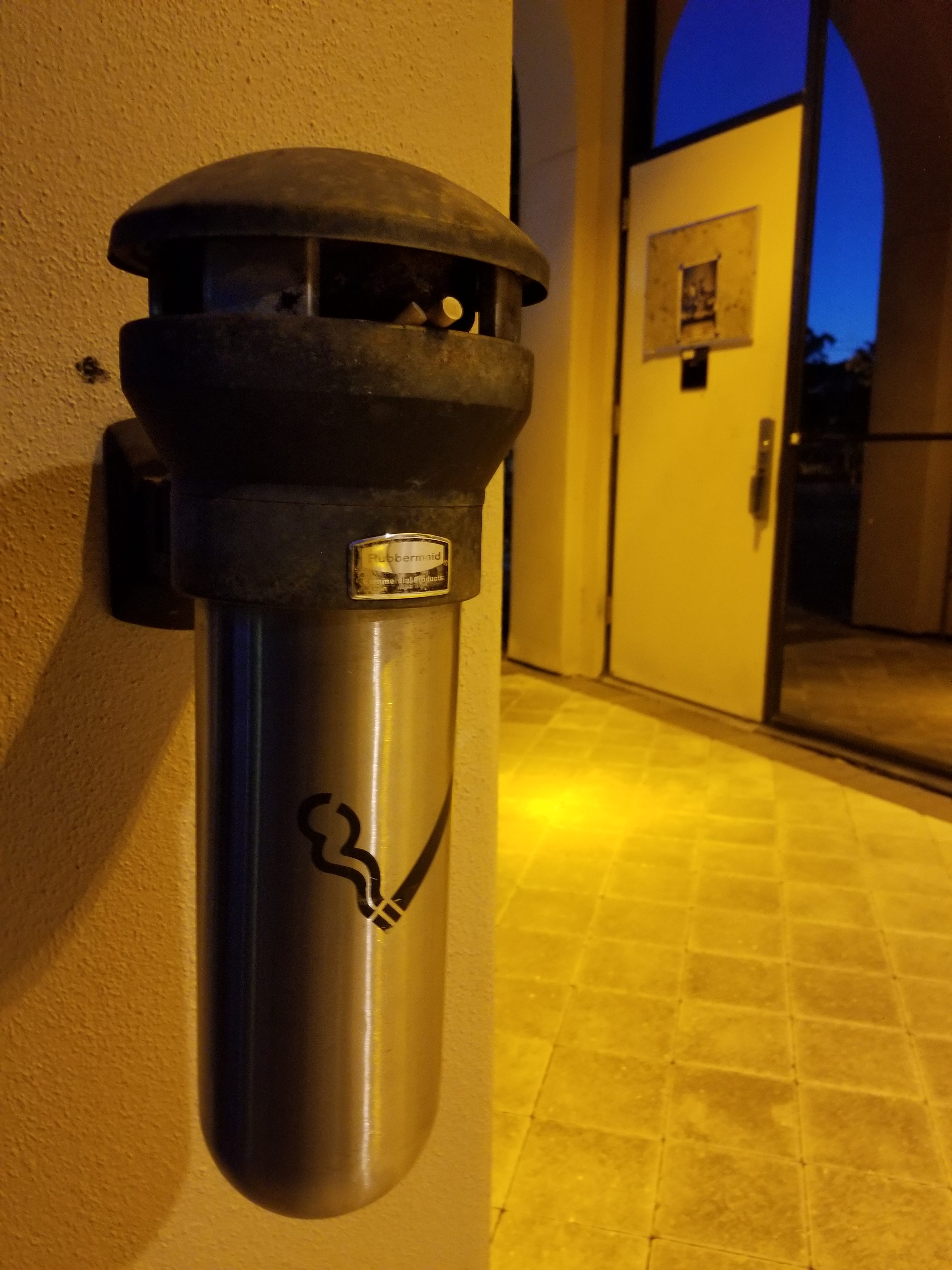 There is something in the air at New College, but not for long. Over the last couple of years, New College has been conducting the “Breathe Easy New College” campaign in an effort to curtail students’ on-campus tobacco use. So far, smoking has been relegated to designated outdoor areas, each marked with a “Designated Tobacco Use Area” sign and a receptacle to dispose of the ash. However, on Apr. 22,  administration announced that a total tobacco prohibition will go into effect by fall 2020.

From its onset, the Breathe Easy campaign was clear about its long-term goal to end smoking on campus. In an interview with the Catalyst from Apr. 5, 2016, then-Health Coordinator Amanda Parente said that the earlier policies that aimed at reducing smoking were done so that tobacco’s elimination on campus would not come as a “total shock.”  Even if students are not shocked, some are unhappy with the upcoming policy.
“It was not [the lack of] New College smoking ban that was keeping me from quitting before now,” first-year and smoker Gabriel Motsinger said. “I’ve obviously tried before now. It was not like, ‘Now that New College has banned cigarettes, I can finally be free.’ It is still going to be there. People are addicted to this, whether they like it or not.”

Colleges and universities across the country have cracked down on tobacco use, ever since the U.S. Department of Health and Human Services, the University of Michigan and the American College Health Association collaboratively launched the Tobacco-Free College Campus Initiative in 2012. At the time, there were 774 colleges and universities that had some kind of smoking or tobacco ban on their campuses. By 2017, that number had more than doubled, rising to 2,082. Some of the policies enacted included fining students who were caught smoking on the premises, such as at Michigan State University where students could be fined up to $150.

New College does not plan to take so brutal of an approach. Once the ban is put into place, any student or faculty member caught smoking (which, according to the Breathe Easy New College page, includes using an electronic cigarette) on campus will be instructed to either leave campus or discard their cigarette. If an individual is caught smoking multiple times or refuses to comply, they will be referred to the Dean of Student Affairs or Human Resources for disciplinary action.

The results of bans at other schools have been mixed. After the University of Michigan banned smoking in 2011, 64.5 percent of students said that they saw a decrease in smoking around campus and 4 percent of students said they were planning on quitting smoking. Michael Vuolo, a researcher at Ohio State University, conducted a study that found that smoking bans at colleges were likely to prevent young people from starting a smoking habit and increased the likelihood that casual smokers would quit using tobacco. However, smoking bans have proven to be much less effective at treating smokers that already have an established habit.

Smoking bans on campuses often seek to change the norms of a campus, but there is a serious question as to how the student body of New College will respond. The ban on smoking does not extend past the school’s borders. After all, a student would need only to walk to the sidewalk next to a public street to smoke if they wished.

“There are lots of things that are illegal to smoke on this campus that I am pretty sure students still do,” Motsinger said. “I don’t think that putting cigarettes on that list would fix that problem.”

Information for this article was gathered from ncfcatalyst.com, cdc.gov, usatoday.com and news.ncf.edu.