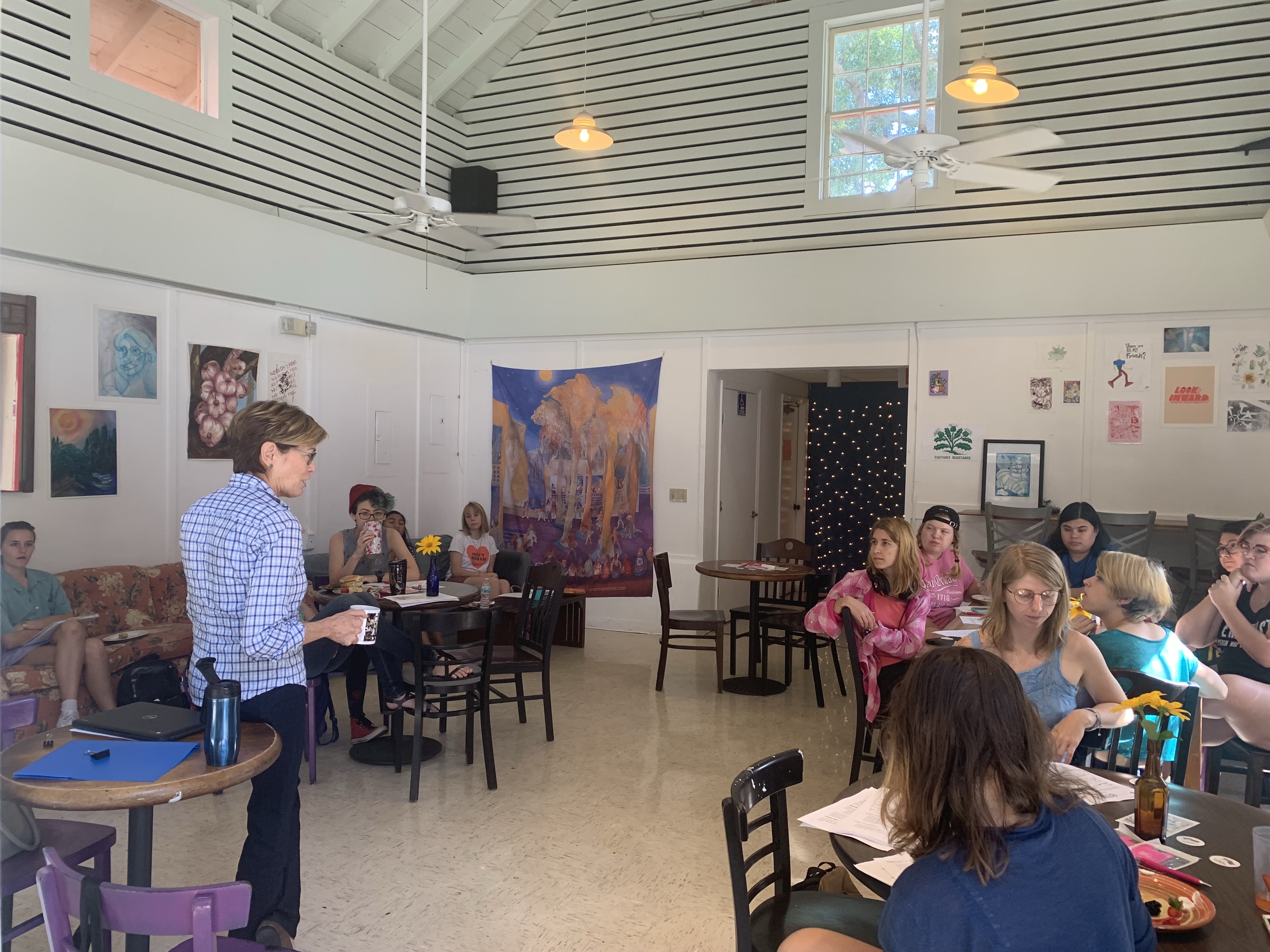 Far too often, patients seeking reproductive health care from non-profit organization Planned Parenthood are harassed by groups of anti-abortion protestors. Therefore, to reassure patients and provide comfort, community volunteers called “patient escorts” walk the patients from their cars to the entrance of the health care center every Tuesday, usually the day abortions are provided. On Saturday, Nov. 10, New College alumna and Planned Parenthood organizer Annie Rosenblum (‘14) conducted an Escort Training & Brunch at the Four Winds Café to inform students about how they can assist Planned Parenthood staff and improve the healthcare experience of clients.

Before the training, as students munched on breakfast scones catered by Four Winds, Planned Parenthood of Southwest and Central Florida (PPSWCFL) CEO Stephanie Kight gave a warm welcome to students, introducing the mission of Planned Parenthood and encouraging them to get involved.

“Super thank you for volunteering to do this,” Kight said. “There’s not a patient we’ve seen who wasn’t grateful to be walked to the building. It really makes a difference.”

Kight also shared a humorous story of an encounter she had with a protestor as she was trying to exit the health center for a lunch break. Upon stepping outside, where several dozen protestors stood in wait, Kight was confronted by a woman who recognized her as the CEO and accused her of “eating baby parts.” In response, Kight simply burst out laughing, having never heard such an allegation before.

“We can’t accept these cruel things [protestors] say to women coming in for care and to our staff,” Kight said.

After Kight departed, Rosenblum made a few opening statements of her own, expressing how excited she was to see new faces eager to learn about patient escorting. Trainings are usually held at Planned Parenthood centers, but Rosenblum decided to facilitate the event on campus to make it more accessible for students.

“When I was a volunteer, there were a ton of students doing it,” Rosenblum said. Rosenblum started working as a patient escort during her first year at New College, having discovered the position through a Forum email. Now, most patient escorts are elderly women, some of them snowbirds who are active volunteers at their local clinic up north. “I would love to see more young folks doing it again, especially New College students,” Rosenblum added.

The manual also lists several tactics used by anti-abortion protestors, such as sidewalk “counseling,” pickets, obstructing access and, on rare occasions, violence. Some protestors toting “anti-choice literature” may try to dissuade patients from entering the healthcare center, offering other alternatives to abortion, while more aggressive individuals may hold up pictures of what they claim are aborted fetuses and yell at patients.

“We remind the patients that they do not have to listen to protestors, but the idea of patients internalizing these stigmatizing and judgmental words is heartbreaking,” Rosenblum said.

The Freedom of Access to Clinic Entrances (FACE) Act, signed by former President Bill Clinton in 1994, legally prevents protestors from blocking access to abortion clinics. As a result, protestors must hover on the sidewalk, a few steps away from the clinic entrance. However, they may attempt to block cars from entering the parking lot.

“Most of us have been patients at some point in our life, but I’m pretty sure you weren’t aggressively berated when you were going to the dentist or chiropractor,” Rosenblum said.

Although the crowd of protestors may be intimidating, the training manual urges volunteers to “be assertive without being hostile” and to “be vigilant and observant.” Escorts should calmly greet patients and walk them to the entrance of the building or back to their car while guarding the patient from cameras, if news organizations are present. Health center escorts should not speak to the media. Moreover, Planned Parenthood has a strict Volunteer Code of Conduct and Non-Engagement Policy, which states that escorts should never engage with the protestors, stay at least 10 feet away from them and not respond to insults or threats.

“It’s understandable to be angry and upset,” Rosenblum said. “Some people are too angry or too anxious and shy. It’s a lot to manage.” For people who may not be comfortable with facing protestors, Rosenblum suggests sending encouraging notes to staff and patients. As another alternative, members of New College’s Generation Action chapter who were present at the training encouraged attendees to participate in on-campus activities which support Planned Parenthood.

Rosenblum hopes there will be a revival of New College students engaged as patient escorts at Planned Parenthood. “Reproductive healthcare is essential, life-saving healthcare, and everyone deserves access to nonjudgmental, comprehensive services,” Rosenblum said. “The most rewarding thing about escorting is knowing that you are there to help them on one of the possibly most difficult days of their life.”

To sign up to volunteer, email volunteer@myplannedparenthood.org. Planned Parenthood Health Center of Sarasota is approximately 10 minutes away from campus by car, located in the Rosemary District. Students may also take a Sarasota County Area Transit (SCAT) bus downtown or organize rideshares.

Information for this article was gathered from plannedparenthood.org., lifenews.com and pewforum.org.