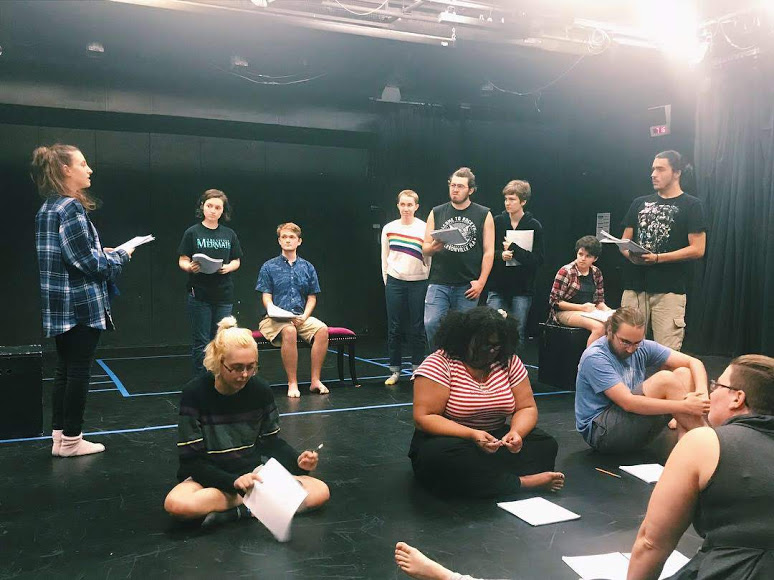 Tucked in the back corner of the Hamilton “Ham” Center is all the world, or as some prefer to call it, a stage. For New College students, it’s simply The Black Box. The Black Box Theatre’s (BBT) first production of the 2018-2019 season is an adaptation of Shakespeare’s Cymbeline that stars thesis students Austin Grey, Bliss Aruj and Araya Barnes. Props include a headless dummy made out of duct tape. It is also the debut show of [performance @ new college], a New College theatrical production company under the artistic direction of theatre and performance studies faculty. The Windmill Theatre Company, the only production company on campus before the creation of [performance @ new college], will continue to produce student-directed work. Cymbeline is directed by Monica Cross, the production manager/technical director of the BBT and a New College alumni (‘10).

“It is the Shakespeare play of all Shakespeare plays,” Cross said. “It takes plot points from all of his much more well-known plays and it mixes them all together in a blender.”

According to [performance @ new college]’s website, “Cymbeline follows the story of Imogen, daughter of King Cymbeline, the aging monarch of ancient Britain. Imogen has married Posthumus against her father’s wishes and now Posthumus has been banished. In Rome, Posthumus is pressured into making a bet over his wife’s faithfulness. Under house arrest by her father, Imogen is beset by a wicked stepmother, a stepbrother who makes more than brotherly advances and a stranger sent from Rome. Disguises, mistaken identity, a headless body, the Roman army and the recovery of two missing children follow in this 17th-century fairytale.”

Cross cut scenes from the original script and approaches the text in a contemporary way.

“I think it’s fascinating to look at the characters of Iachimo or of Posthumus as characters who realize how horrible their behavior has been and in various ways try to atone for it, or don’t,” Cross said. “I haven’t seen that explored in other productions as fully as I see it in the text.”

Cross has directed other early modern dramas, including Twelfth Night (‘15), The Maid’s Tragedy (‘16) and Gallathea (‘16). These plays, including Cymbeline, share the commonality that the leading character is Assigned-Female-At-Birth (AFAB) and disguises themself as a man, for different reasons, and in doing so, gains a sense of freedom that they could not otherwise. Cross has made directorial changes to each production.

“She has a lot of experience with alternative ways of interpreting Shakespeare,” Aruj, who plays Imogene, said. “It’s so helpful to have a Shakespeare expert working through Shakespeare with you because it reveals so much you might not have seen in the text.” Aruj has been an active member of the on-campus theatre community throughout her New College career. This is her first lead role.

It is also Aruj’s first time using stage combat in a show. Cymbeline marks the first time a production has received fight and intimacy choreography, movement that creates the illusion of physical combat or romance, from a New College faculty member. Cymbeline calls for a physically romantic scene as well as a knife fight and the carrying of fake corpses.

“We’re very lucky that we now have Professor [of Theatre and Performance Studies] Diego Villada who came in and worked one-on-one with Araya and I in that intimacy scene,” Aruj said. “It was interesting learning the intricacies of what goes into intimacy choreography and discussing consent in that arena.”

Information for this article was gathered from ncf.edu.

Reserve your seat and learn more about [performance @ new college] at www.ncf.edu/about/news-and-events/performance-and-lecture-series/performance-new-college/.