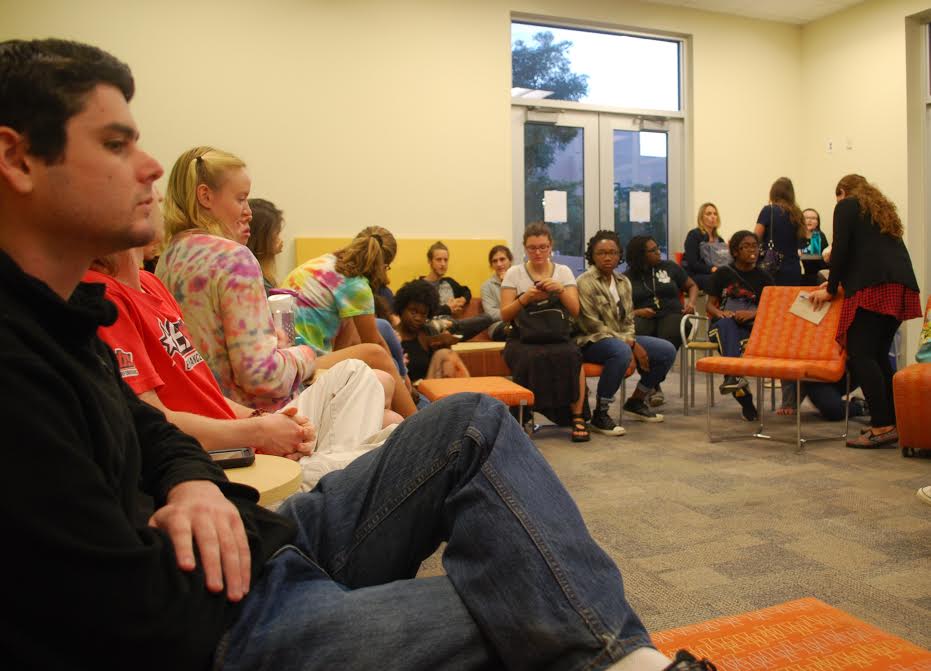 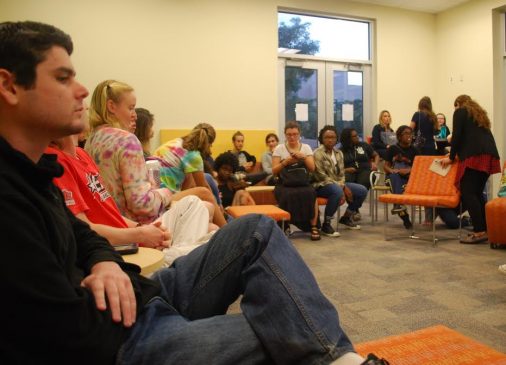 It was a Friday evening, classes were out and yet dozens of students remained on the academic side of campus to witness the reveal of one of the most controversial Student Court cases to date.

“It’s come to our attention that Paul [Loriston, third-year] and I should resign as NCSA [New College Student Alliance] co-Presidents on the advice of Student Court,” third-year and NCSA co-President Miles Iton said.

The Cabinet Meeting took place on Friday, Nov. 18 at 5:45 p.m.. Due to the sheer amount of people in attendance – which included Event Coordinator Tara Centenno and Dean of Student Affairs Robin Williamson – Chief of Staff and third-year Olivia VanHousen began the Cabinet Meeting by having members of the Cabinet introduce themselves. Afterwards, other members of the NCSA, from discipline representatives to the Mac Lab TA, were found to be in attendance and also introduced themselves, among giggles from the audience.

Student Court Chief Justice and thesis-student Allen Serrell and Student Court Counselor and second-year Sage Ray, who was revealed to be one of the complainants behind the case, were both in attendance.

The first offense brought against the co-Presidents was the lengthy hiring process for the new Supervisor of Elections after the previous Supervisor, third-year George Thurlow, resigned; the second offense is for lack of attendance at faculty meetings and the third offense was the presentation of an agenda item by Paul Loriston to extend the late fall NCSA elections at the Nov. 14 Towne Meeting.

Serrell, who opted to recuse himself from the case, expressed hope that the hearing, should the case go to trial, allow all participants to end on good terms by the outcome of the case.

“We don’t want to make it anymore inconvenient than it already is,” Serrell said.  “But I think that it’s something that’s serious enough that the student body should be made aware of it. […] I just want to thank you two again for meeting with me, I think it was a productive conversation and I think this was a way to show that we can deal with our disagreements in a way that doesn’t have to be acrimonious.”

Loriston and Iton, however, disagreed with the nature of the case. Loriston and Iton maintained that that the lengthy hiring process for the new Supervisor of Elections, as well as Loriston’s presentation at the Nov. 14 Towne Meeting, was due to their interest in hiring a qualified candidate and the shortcomings of the Human Resources department, a requirement for any individual working a job with the New College of Florida in order to appear on the payroll. Loriston also maintained that the cold weather deterred him from wanting to present at the Towne Meeting, which took place in Palm Court, for any longer than he had to. The two also stated that Iton had attended a faculty meeting in the summer, while Loriston had attended the other, while working his second job as a Campus Spaces Assistant and that the only agenda item voted on was for Day of Dialogue, one that Iton had been a part of.

“This [the student court case] does seem acrimonious because, if someone fucks up, the proper thing is to tell them,” Loriston stated at the Cabinet Meeting. “The not proper thing is to hush up about it, form a case, and then tell me that I should resign. That’s rude, disrespectful and not representative of what true democracy should be like.”

Additionally, Vice President of Relations and Financial Affairs, Cheikhou Kane, brought up a previous issue of malfeasance from Ray on the basis of micromanagement of individuals, particularly women of color, on the Cabinet. A written statement was formed asking for a recall election but was never sent out to the student’s list.

“In the interest of civility, in order to keep pushing the school forward, nothing was made further at this point,” Kane stated, referring to the written statement that was never sent out.  “Now, on our side, I find it quite disrespectful.”

At various points, VanHousen interjected to remind the attendants to remain respectful.

“Stop!” VanHousen said. “I will not have anyone antagonizing each other and we are not attacking each other.”

Both Ray and Serrell opted not to speak on the specifics of the case, stating that, once the case was finalized, it would become public record.

“There are arguments being brought up here that are for a trial,” Ray said. “While I recognize that there are a large number of people on from the student body, this is not the time and place for it. If somebody does have a specific question for me, let me know.”

Attendants, some of which included NCSA officials, took issue with news of both cases.

“I see a lot of biases here, you seem to allow systems of oppression to be perpetuated,” second-year and Humanities Representative Andreina Carrasuqero said. “I think hiding this from the student body is not okay – there are women of color in this campus that probably should know, everyone should know that this has been going on – not just NCSA officials or people on the Cabinet. This issue exists outside of New College and New College also perpetuates this.”

“I just want to say, as the former Chief of Staff, who worked with Late Night Library Hours and also the elections, I could not imagine having your Chief of Staff and Supervisor of Elections resign and having to deal with these,” Ralph said. “I commend you both for that.”

Thesis student Harn brought up the nature of the case, which involved two members of Student Court.

“We know that this is a small school, how is Student Court supposed to remain impartial?” Harn asked. “Are you saying that you didn’t know that they were working on this legislation?”

In fact, it was the amount of Student Court members who opted to be recused from the case that contributed to the case being pulled.

“After a complaint draft was discussed in the most recent cabinet meeting, two more Justices decided that they should recuse themselves from a potential hearing,” second-year and Student Court Justice Jackie School wrote in an email to the student’s list, a couple days after the Cabinet Meeting. “Great Book section 1003.4 states ‘[n]o action may be taken at a meeting where more than half the voting members are proxies.’ There are a few potential paths forward to deal with a situation like this, but the complainants have decided not to continue pursuing the case.”

Williamson spoke at the meeting, discussing her amazement at the involvement from students who receive almost zero guidance from administration in positions such as the NCSA.

“I also hope that we would show understanding to the Cabinet who, from my perspective, don’t get a lot of guidance, or you get what you get from years past so sometimes, people make mistakes, and there needs to be some understanding and some conversation and some communication,” Williamson said. “There are also other underlying issues that we need to have conversations about as a community. […] This dialogue is really the first step, I think this could really go a long way. That’s just my two cents, spend it well.”

The minutes from the Nov. 18 Cabinet meeting and the Nov. 14 Towne Meeting can be found on the student’s list. More information about this court case can be found by emailing Jackie Scholl at jackie.scholl15@ncf.edu.