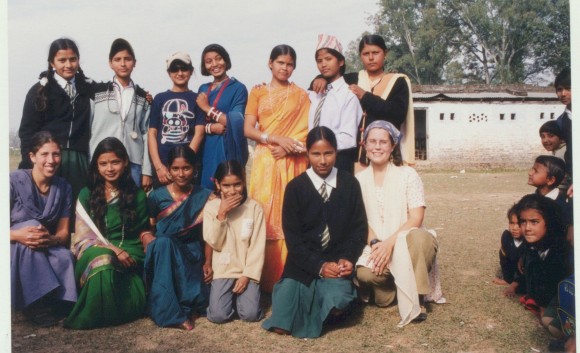 Natalie Rector with a group of high schoolers she taught in Nepal.

Depending on where participants go as Peace Corps volunteers, they may be the first Americans that many people have met in the flesh. Natalie Rector, New College visiting librarian and former Peace Corps volunteer, stated that in Nepal, where she volunteered, “they saw Madonna on TV” and thought all Americans were like that. It is one of the goals of the Peace Corps to demolish these kinds of preconceived notions of Americans, as well as help Americans better understand the cultures of other countries.

Rector, who spoke at the campus’ Feb. 29 Peace Corps workshop, gave information about the program as well as her own time abroad.

The Peace Corps, founded by President John F. Kennedy in 1951, is an American volunteer program that sends participants to one of sixty countries over a 24-month period. Volunteers work in a variety of fields, including education and environment. There are no fees to go, and participants receive medical and dental benefits. They also usually stay with a local family to help them integrate better into the community and surrounding culture. “The most important thing is flexibility,” Rector commented. “It takes flexibility to live with a family and eat what they eat. If you’re a picky eater, then good luck.”

Rector worked as an education volunteer who taught English as a Foreign Language (ESOL) to both third graders and high school students.

Beyond the ESOL teaching, there were other activities Rector worked on with the students. “We did an HIV/AIDS education play,” she remembered.

As Rector spoke, she pointed at pictures on the projector screen that were taken during her time abroad. One was a photo of the school building in which she taught. There were dirt floors and no glass in the windows. “Many of [the students] had to share pencils,” Rector said. Limited resources did not stop Rector and her students, though. Before going abroad, Rector underwent three months of excessive training, five to six hours a day, part of which taught her to “make do with what you have.” When asked how the parents of her students reacted to her presence in the school, Rector replied that they “were very supportive.”

Patty Walsh, another Peace Corps volunteer, also spoke about her experience in the program. Walsh went to Madagascar for about a year and a half as an environmental volunteer. “[The Peace Corps] chose me to go to Madagascar because of my background as a zoo keeper,” Walsh said. Walsh worked at local schools and helped develop farms with the students.

However, as Madagascar is a Francophone country, Walsh was first greeted in French upon arriving, and having only taken “about three months of French in high school, a very long time ago,” she wasn’t fluent enough to converse in French. So instead, she was taught Malagasy, the national language of Madagascar, to help her better communicate with the villagers.

Those same villagers actually built Walsh her own little house to live in and latrine to use while she lived amongst them. She showed New College students a picture and pointed to the house in the middle with the blue door. “That was my house, that’s where I lived,” she said.

“There was no electricity, no running water,” Walsh added. “Education volunteers are usually closer to cities because that’s where the schools are. Environment volunteers, you’re going to be out in the woods.”

Walsh concluded her talk by saying that her experience in Madagascar was “the most challenging experience” of her life, but also “the best.”

New College Professor of Psychology Gordon Bauer agreed that his own experience in the Peace Corps 40 years ago was extremely rewarding. Bauer, who previously taught in rurual Virginia and the inner cities of Washington, D.C., was an education volunteer in El Salvador teaching mentally handicapped children. He was asked how the experience changed him. “I’m a lot less concerned with things that I used to think were major problems in life,” Bauer replied. “[Now] I look at them as minor inconveniences.”

On a slightly negative side, Bauer admits that now he’s “not quite as tolerant of people complaining about minor inconveniences in their lives.”

Bauer concluded his talk by saying, “I think my perspective is more international.”

The workshop finished with recruiter Dwan Adams speaking to students over webcam. One question Adams answered concerned graduate schools. Adams spoke about schools who participate in either the Master’s International or Fellows/USA. Master’s International offers over 100 programs in a large variety of subjects, and participants can begin their studies on campus then go abroad with Peace Corps for two years before returning to school to finish their studies. With Fellows/USA, students who have already completed their Peace Corps service can return to the States and receive benefits like reduced tuition and stipends.

When asked about the application process for Peace Corps and what can make someone stand out, Adams replied, “We look at what the applicant has majored in, but also what their outside interests are.”