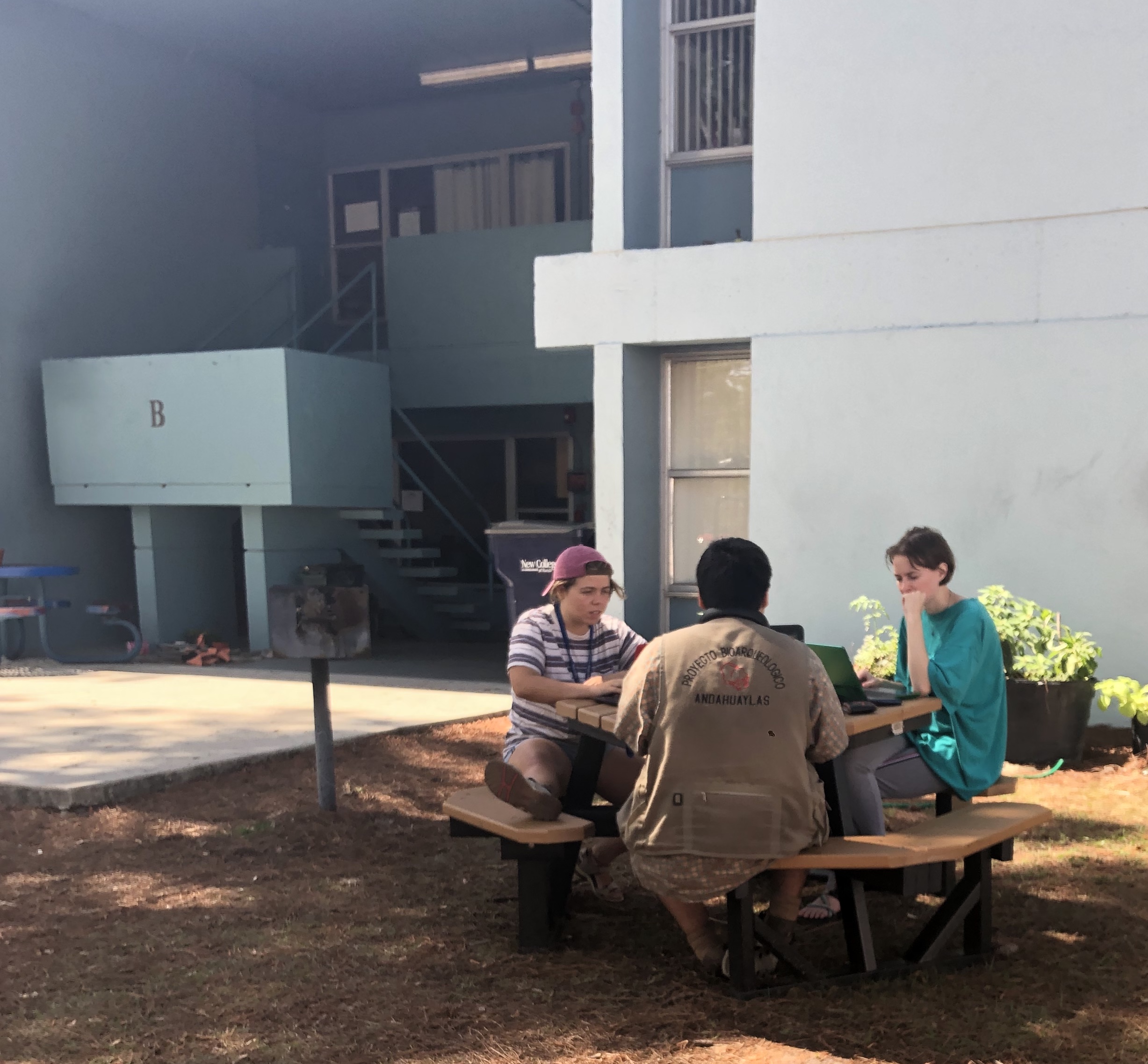 Katrina Carlin/Catalyst Chavez, who lives off campus, sits at B dorm with two residents.

Thesis student Cesar Chavez sits on the Palmer B dorm porch in his “Proyecto Bioarqueologicó Andahuaylas” vest, conversing in his booming voice, punctuated by giggling fits—at least until he talks about what he did last Friday, Feb. 22. Chavez is a friendly, open conversationalist and speaks eloquently when asked about his decision to boycott Palm Court Party (PCP). The B dorm porch is where Chavez organized his “PCP boycott” protesting the New College Police Department (NCPD). In an email sent out to the Forum and Student’s List, Chavez included safety tips and advice for how to engage with the police.

“I would like to make it clear that this boycott is NOT an attack on the PCP organizers who are doing everything they can to make sure everyone is safe,” Chavez wrote in his initial email. “It is my way of protesting the way the NCPD, who through their discriminatory actions have made public events and spaces unsafe for [people of color].”

“Since my first year at New College, I’ve had very negative experiences with the NCPD,” Chavez said. “Many of them stem from racial profiling. As a result, it has made me feel unwanted by the community.”

When asked about how he identified these incidents as racial profiling, Chavez told a story about how a police officer stopped him, and told Chavez that he didn’t know if Chavez belonged on campus or not. Chavez showed him his dorm key, but didn’t have his student ID. The police officer would not let Chavez go back into his Z dorm room to obtain his ID to show that he was a student. Chavez explained that upon further pressure about why the officer was stopping him, the officer stated that Chavez “didn’t look like he belonged on campus.”

Campus Police Captain Kathleen Vacca was reached for comment on this issue.

“The student wrote a letter stating what he intended to do with the protest, it is true that he made a complaint at the previous PCP,” Vacca said. “It was taken seriously and investigated, seven pages of investigation I believe, we contacted several witnesses, they found that the discriminatory action [complaint] was unfounded. The investigation, now that it’s closed, is available online. His concern was that he was stopped without justification on the basis of color, and the officer explained to him that he just wanted to see his identification to determine that he was not the person the police were looking for.”

Vacca also emphasized her awareness of racialized interactions between police officers and people of color, and her commitment to taking action if a situation was brought to her awareness.

“There have been some instances where people, students and faculty members, have experienced [discriminatory actions toward people of color] with police in a variety of places, other countries and some even around here, in this county,” Vacca said. “But during my tenure, a little over a year and a half, [Cesar’s complaint] is the only written complaint we have and after review we found that it was unfounded. If anyone has an issue I encourage them to notify me or any member of our police department.”

Despite attempts to create a more inclusive campus, with moves like hiring Dean of Outreach, Engagement and Inclusion and Chief Diversity Officer Bill Woodson, the PCP Boycott highlights the ways in which students of color continue to feel unsafe on campus.