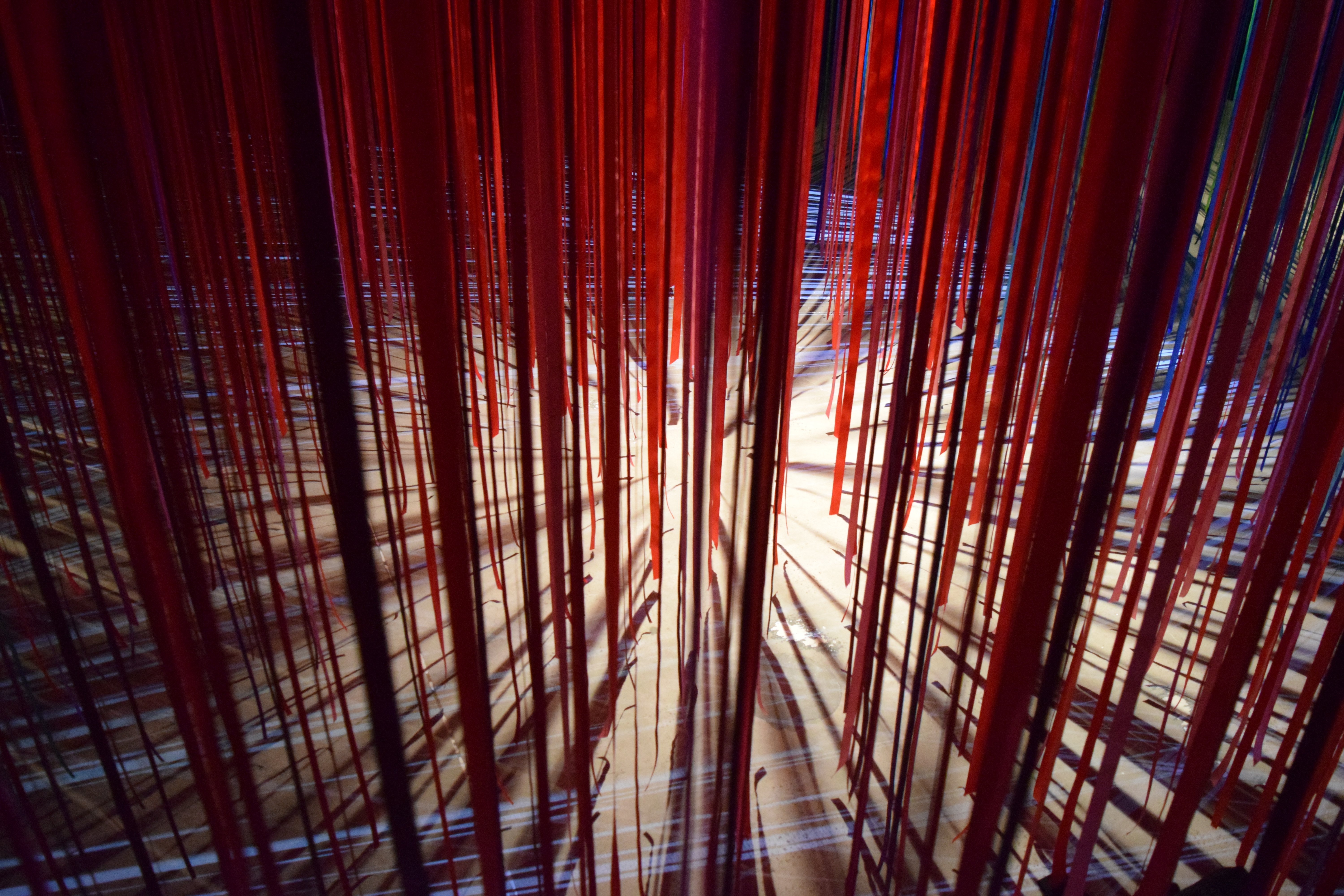 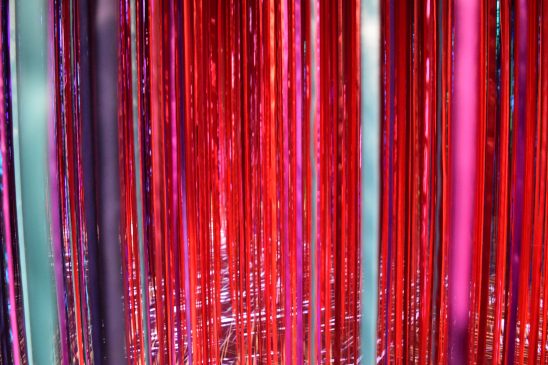 Pathless Woods, an interactive multi-media installation by American artist Anne Patterson, is currently on display at the John and Mable Ringling Museum of Art. The exhibit runs until early April and features 24 miles of different colored ribbon suspended from the gallery ceiling. Classical music and an intricate light show loop every twenty minutes, giving the ribbons the appearance of a stained glass window and the gallery an atmosphere evocative of the mystical splendor of a gothic cathedral.

The title of the piece is taken from a line of Lord Byron’s poetry, “there is a pleasure in the pathless woods”—a reference to the idea that the viewer can find their own path through the installation, with their ability to choose how they interact with the piece determining the outcome of their experience.

“What brings the piece together is that Anne actually created and arranged the different color ribbon so that there is a kind of segue between colors that actually makes sense,” Chris Jones, associate curator of photography and exhibitions at the Ringling, said. “She did that by actually plotting it on a graph, she was really meticulous ahead of time in planning where each color ribbon went.”

The piece required over 740 hours of work in the two weeks prior to the gallery’s opening on Nov. 4. The 35 volunteers cut and sorted the ribbon prior to its installation on the gallery ceiling, tediously organizing the ribbons into the meticulously plotted arrangement created by Patterson.

“It was pretty neat, it set up a community of people working on the piece for the week or two before the exhibition opened,” Jones said. “Some people actually volunteered, some of them were museum staff, students and interns and then others were just people in the community who were interested or had heard about it. It became like a workshop in the gallery for a week or two.”

The installation was organized by the Ringling’s previous curator of modern and contemporary art, Matthew McLendon—now the head curator at the University of Virginia’s Fralin Museum of Art—who had met Anne at the Hermitage, an artist’s retreat in Englewood, Florida.

“She had talked about an installation that she had going on in San Francisco at Grace Cathedral,” Jones said. “It was called Graced by Light. She described it to him, and he actually went to see it in person. It was absolutely incredible, and he was excited about finding a way to bring Anne here to the Ringling.” 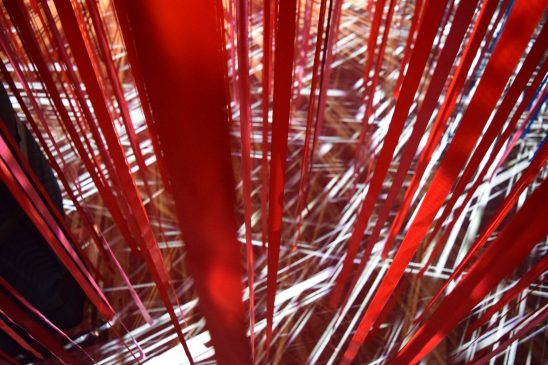 Patterson studied architecture at Yale University before moving to Manhattan to pursue art, with a focus on site-specific, highly sensory installations that allow the audience to interact directly with her artwork. Pathless Woods allows viewers to move through a forest of silky ribbons, creating their own path as they work their way through the room. This emphasis on tactile and visual experience is the result of the artist’s personal experience with synesthesia, a neurological condition in which stimulation of one sensory pathway triggers involuntary stimulation of another sensory pathway.

(The condition, famously known for its ability to allow people to “hear colors” and “see sounds,” is historically represented in the art of Symbolist poets such as Arthur Rimbaud and Charles Baudelaire as well as in more contemporary examples of psychedelic art and drug culture.)

“I see an incredible magnificence of colors and shapes when I hear music, the smells of spring trigger a play of light in my mind and my primary numbers have personalities,” Patterson writes on her website. “My art is a response to the natural world. I strive to create work that transports us into a multi-sensory realm, similar to that which I’ve inhabited for my entire life, and deepens our relationship to the beauty around us.”

Patterson’s installation was the inaugural exhibition for the Keith D. and Linda L. Monda Gallery of Contemporary Art, a gallery dedicated to contemporary art and practice that opened last November.

“We are always working on projects with living artists, contemporary artists, to do exhibitions and, often, with those exhibitions come installations or pieces that are commissioned specifically for the Ringling,” Jones said. “We hope to bring more contemporary installations into the Ringling. Part of the focus of the Mondo gallery is to show new work and new artists and to have that kind of turnover maybe a couple of times per year. Some of that work is going to be cross genre and some of it might be installation performance.” 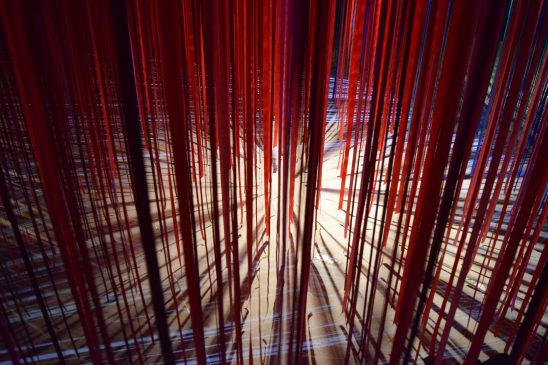 The recent addition of two contemporary galleries—the Monda and the gallery for Contemporary Asian Artsis part of a larger initiative by the Ringling to move away toward more contemporary forms of artistic practice that often include elements of performance, mixed-medias and audience interaction.

“In the past I think we had a reputation that was more about our old master collection, the Rubens and the baroque, and of course the circus museum,” Jones said. “There was sort of this idea that people would not be receptive to more boundary-pushing, contemporary stuff, but we’ve found that people are actually really interested in engaging with contemporary art. We don’t know if these kind of contemporary art exhibitions are bringing in more people from afar, but they seem to be really connecting with the community.”

This emphasis on more community-centered art exhibitions and events is an extenuation of the Sarasota arts community’s attempts to engage with young people, especially young professionals and students in the Sarasota area.

“I think that a lot of people that are here, that live here were under the impression that they saw the permanent collection when they were in school on a field trip and they don’t need to see it again,” Alice Murphy, the public relations manager at the Ringling, added. “So I think that having these rotating, more contemporary exhibitions are bringing them back in.”

The reception for the installation has been largely positive according to Jones and Murphy.

“I haven’t really heard any complaints about it, except for the opening night when some people were wondering where the art was,” Jones said. “They went through all the ribbons and there wasn’t anything in the back and they didn’t really understand. But that was only the first day so…”

“Most people love it,” Murphy added. “The guards say that everyone comes out of it smiling.”