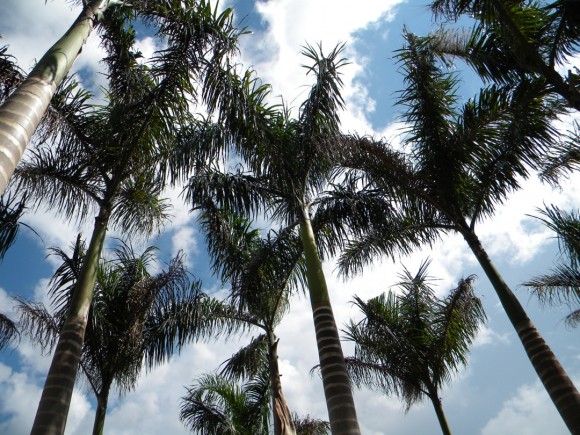 Construction-weary Novocollegians breathed a collective sigh of relief last Wednesday when Palm Court reopened for pedestrian traffic and events. The plaza, affectionately enshrined in the New College Student Alliance (NCSA) Constitution as “the Center of the Universe,” was remodeled extensively over the summer — new pavers, or decorative bricks, were installed to replace the tiles that were infamous amongst students for either burning feet or causing one’s feet to slip during a torrential rainstorm. A new set of trees was planted to provide more shade.

One of the hallmarks of the renovation is the personalized pavers scattered throughout new Palm Court. The pavers, which came in four different sizes, helped pay for the remodeling effort and were sold through the New College Foundation. Alums and other donors were able to put messages on the pavers ranging from the traditional (such as one’s name and class) to the surreal (“This is not a brick”).

“There will still be a few more brick inscriptions coming from the Palm Court initiative, but we estimate a total of 350 bricks as of now,” Alum Coordinator Morgan Boecher (’06) told the Catalyst via e-mail. “There were 383 donors who made 682 gifts over two-and-a-half years.”

The paver program has been a boon for the Foundation—so much so that the program will be extended to benefit another initiative.

“Right now we are considering the Alumnae/i Fellows program, but this decision has not been finalized,” Boecher commented.

When Palm Court reopened, students were seen sitting in the newfound shade eating, relaxing and generally shooting the breeze under the new, larger trees. A Towne Meeting soon followed, the first in Palm Court since last academic year. Students stayed in Palm Court afterward and danced the night away, celebrating the reclamation of the Center of the Universe with an impromptu Wall.

Silver Plaque/Name Plate: $5000 and above

Having the Center of the Universe back: priceless