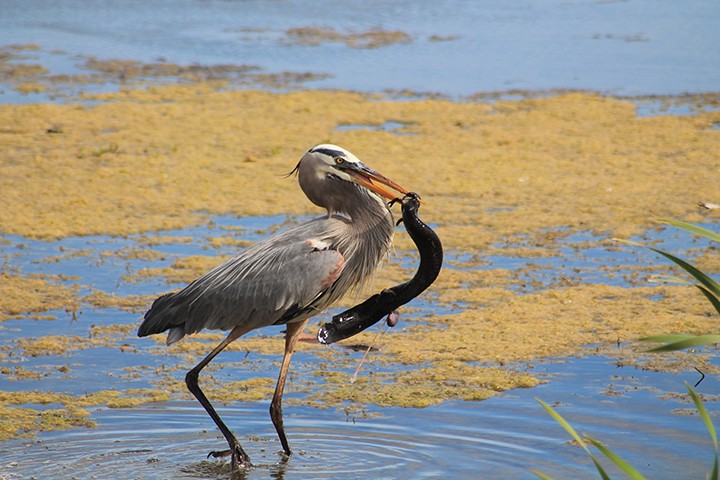 Feb. 15 marked the 19th annual Orlando Wetlands Festival in Christmas, Fla. Christmas is an unincorporated area in Orange County with less than 1,500 residents. The festival features live animals, wildlife education and tours of the wetlands. The wetlands are one of two sites for the festival, the other being musical and environmental attractions at the Fort Christmas Historical Park. The event is sponsored by the City of Orlando, Orange Audubon Society and Orange County Parks and Recreation. Second-year Tony Opio hosted an event that brought students from the Outdoor Adventure Living Learning Community (LLC) to this wet wonderland.

“The festival offered a lot of areas of education and in this day and age it’s becoming more and more important to be aware of the ecosystems around us, how they function and what we can do to help maintain them,” Opio said.

In the initial email sent out to the forum about the event, Opio acknowledged that the festival took place on the unceded land of the Seminole people. A plaque in Fort Christmas Historical Park stated that white settlers “moved” into Florida in the early 1800s and hoped to “convince” Seminole people to move to a reservation west of the Mississippi. The park is a replica of the fort built to house colonizers during the Second Seminole War which lasted from 1835 to 1842. Osceola, a member of the Creek Nation who moved from Alabama to Florida after the Creek Wars, led the Seminole resistance. Osceola County, just south of the celebration site of the festival, was named in his honor in 1887.

“We are on the ancestral homelands of the Seminole, Miccosukee and Calusa people,” Opio explained. “It’s exceedingly important to be aware of the land you’re on, the people who have deep cultural connections to it and how you can actively participate in the fight to return land to native nations and people.”

Wetlands are ecosystems found on every continent except for Antarctica and vary in biodiversity and structure, but one unifying characteristic is that water covers the ground. Wetlands improve water quality, reduce storm and flood damage, control erosion and provide a habitat for amphibians, reptiles, birds and mammals. They also recharge groundwater deposits, which is particularly important because Florida sources much of its water from the Floridan aquifer.

“Wetlands festivals are significant because most people don’t know or care about wetlands and wetlands are one of the most important wildlife habitats there are,” CEO of Stocking Savvy Environmental Consulting and alum Sean Patton (‘11) said. “If you care about climate change, wetlands store 40 times more carbon than a traditional forest”.

Although wetlands are a natural part of Florida’s ecosystem, the Orlando Wetlands are 1,220 acres of man-made wetlands built-in 1987. The Orlando Wetlands’ primary function is to treat 14 million gallons of reclaimed water daily before it is discharged into the St. Johns River through a 17-mile long pipe.

“Our wetlands were created at a cattle pasture,” Orlando Wetlands Manager Mark Sees said. “We planted over 2.2 million plants and 50 different native species and as those began to grow, they took up nutrients from the wastewater.”

Patton sold discounted native wetland plants along with free educational materials about how to grow native plants at a table in For Christmas. The students who attended the festival adopted a free Flatwoods Plum tree to plant in the food forest.

“I enjoy putting New College’s name out there with local groups and environmental organizations and going to events like this often opens up good opportunities for students,” Opio said.

Stocking Savvy Environmental Consulting is located in Sarasota and Patton encouraged students to reach out about internships.

“Wetlands have some untold diversity and Florida, being mostly wetlands, has 400 species endemic to the state meaning they are native nowhere else,” Patton said. “They are so poorly understood and so often not even talked about.”

Wetlands are threatened by drought, pollution, global warming and human development. Most of the human destruction of wetlands through draining and paving occurred between the 1950s and the 1970s until environmental conservation slowed the process. According to the National Park Service, more than half of the 221 million acres of wetlands that existed in the lower 48 states in the late 1700s have been destroyed.

Information for this article was obtained from the NPS, NEEF, orlando.gov, and and How Stuff Works