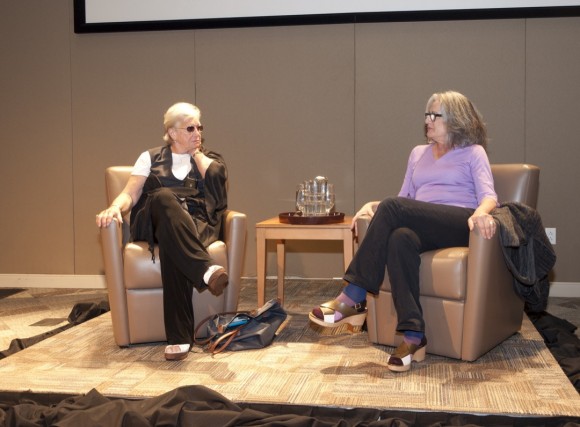 Oscar-winning costume designer Ann Roth showed up at Ringling College of Art and Design clad in gray slacks, a printed blue wrap sweater, wedges, silver bangles and cropped silver hair. Students were warned not to utter the “F” word – fashion – in her presence.

Roth, whose work has attired more than 100 movies and 60 Broadway plays, is not enamored with fashion. She prefers to look at what she designs for films and plays such as The English Patient, The Talented Mr. Ripley, The Hours, Julie & Julia. Mamma Mia!, Angels in America, Working Girl, The Book of Mormon and Midnight Cowboy as character development.

“You need to be brave enough to dress them in cheap clothing,” she said of the actors she works with. “You have to tell them that your grandma washes and bleaches your underwear and it itches. You need to figure out how the actor is dressed from the inside out.”

Roth grew up in Hanover, Penn. in the 1930s. “I went to work in L.A. on the movie Brigadoon,” she said. “I had been raised up until that time to make burlap look like velvet.

“Living [in L.A], I realized that everyone had their own thing,” Roth said. “I was living on very little money. Visually, I realized that there were things that I had never seen before. I would find things that were of interest to me – two thin blue and pink papers from the Chinese laundry. They had these beautiful characters on them. I had never been exposed to anything like that living in the Pennsylvania Dutch area. I put them in a shoebox underneath my bed … I picked up little idiosyncrasies that I liked that didn’t mean anything to anyone else, they just were mine … the point is that when you pull that box out it is a very accurate reflection of what interests you. It is like having a mirror to yourself and that mirror can boost your ego.”

This aesthetic slant aids Roth in her meticulous costume design. In period films or plays, she does painstaking research to make her costumes as true to the setting as possible. Students on hand for a Q&A with Roth were able to look through the artist’s binders, filled with photos of vintage catalogs and clothing, resources she uses to fashion her costumes.

“I think the fact that she does her research …  She makes clothing that the characters wear seem very natural to the character.” Mark Ormond, curator of exhibitions at Ringling College Galleries, said. “They don’t appear to be wearing a costume, they seem to be living in it.”             To figure out the color palette for some of her costumes, Roth paints a series of different-colored dots on a piece of paper – a design that reminds Ormond of abstract art.

For the exhibit, Ormond blew up prints of Roth’s costume sketches and tacked her original sketches and Polaroids to a wall. Televisions alongside these works displayed the completed costumes.

Roth outfitted Meryl Streep for Julie and Julia. During the Q&A, she described the process of dressing Streep for the movie. “Suddenly we do one thing and put the pearls on Meryl and in the room there is another person and it’s not Meryl – it’s Julia Child – and then Meryl Streep is free to have Julia Child’s voice,” she said. “It happens with every great actor … That transformation is very magical. It’s supernatural because it’s not me and it’s not Meryl.”

Roth stayed in Sarasota for three days, arriving on Halloween for the opening reception of an exhibit of her sketches and drawings. The exhibition lasted from Nov. 1 to Nov. 4. On Nov. 1, she appeared for a screening of The Hours and a Q&A. Both events were free and open to the Sarasota community. Roth’s visit was paid for by a grant from the Academy of Motion Picture Arts and Sciences. Her visit was arranged by Amy Robinson, who is on the faculty of the digital filmmaking program at Ringling and was a producer for Julie and Julia.

Roth, who turned 80 on Oct. 30, is still working. She was on schedule for a project the day after she left Sarasota.