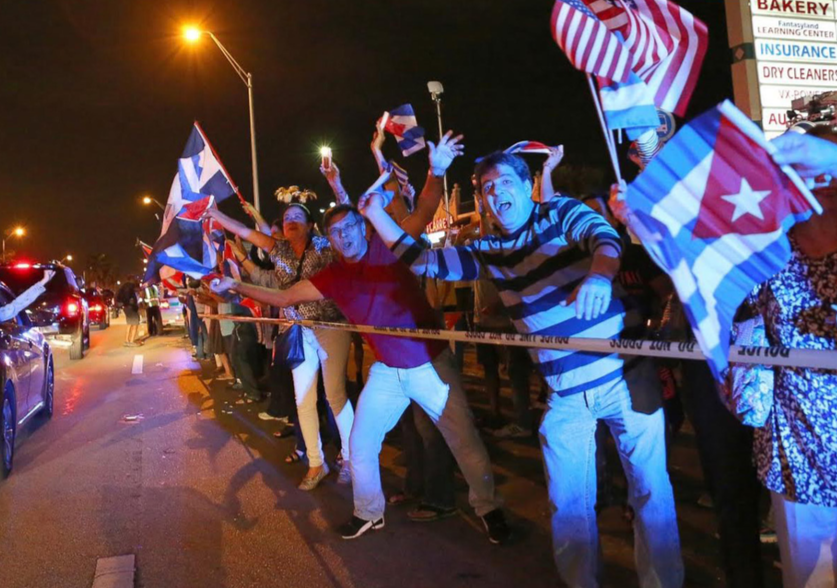 The first thing my mother told me when I woke up at home in Miami on Saturday morning, Nov. 26 was, “Fidel Castro died!” as smiles broke across both of our faces. “No way!” I cheered, sitting up in bed. The man who tore my family apart between two countries has finally fallen.

Fidel’s impact on my life goes far beyond those of edgy millennials who own a Che Guevarra t-shirt. He is the reason my family is separated between two countries, the reason I lived almost my entire life without meeting so many aunts, uncles and cousins. He is the man who robbed me of being able to see and touch my own motherland.

Fellow Cubans reacted to the news by pouring into the streets by the hundreds, banging pots and pans and waving Cuban flags in front of the famous restaurant Versailles. In the capital of Cuban exiles, Fidel’s death was met with pure joy, relief and celebration, a day we have been waiting for for decades.

But not everybody sees it that way. From white American “brocialists” who flirt with Marxism as a mental exercise, to those who admire Fidel’s commitment to Palestinian liberation, to racial equality activists who praise his contribution to ending apartheid in South Africa, many around the world celebrate Fidel’s legacy as a champion for justice.

Except those from his own country. This week, I have found myself exhausted from repeatedly explaining the insanity that is the Castro regime.

Nothing is going to make me admire a man who suppressed freedom of speech, freedom of press, who stole people’s property and livelihoods, who threw anyone who was suspected of “counter-revolutionary” activity in jail indefinitely where they were tortured and many died in horrible conditions, who was so married to his Communist dream that he let a whole country go hungry and in rags while he lived like a king.

Nothing is going to make me applaud the man who arrested my grandfather’s uncle just because he was a policeman during the time of Batista’s presidency, put him in a line with fifty other men in front of a trench, and had his militia mow them down with machine guns.

Nothing is going to make me celebrate the man who created concentration camps for LGBTQ+ Cubans, where suspected “counter-revolutionaries” were forced to do hard labor without sufficient food or water, in unsanitary conditions, where hundreds died of torture and suicide.

Nothing is going to make me respect the man who kept my abuela from saying goodbye to her brother before he died.

But maybe that’s just me and the hundreds of Cubans who leave their families knowing they will never see them again, dying every year on makeshift rafts trying to get to Miami.

Fidel’s favorite catchphrase was, “La historia me absolverá,” or, “History will absolve me.” But I’m not so sure about that. Regardless of ideology, the methods Castro chose to force his vision of a Communist Cuba are inexcusable. Achievements such as high literacy rate and free universal healthcare are not validated by the countless human rights abuses he committed against the Cuban people to keep himself in power.

Fidel Castro may be leaving the world with a mixed legacy, but no one can paint a picture of him without including the heartbreaking narratives of countless Cuban exiles whose lives and those of their descendants were forever scarred by his dictatorship.