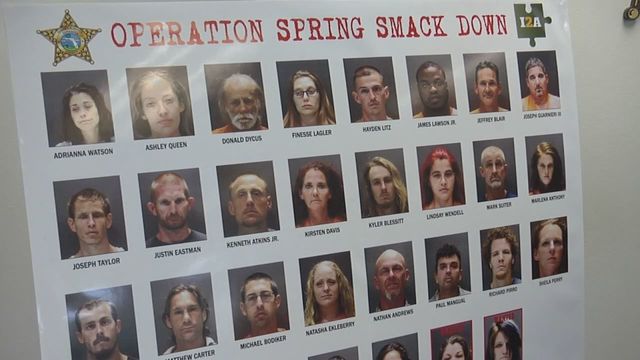 Since the beginning of 2017, there have been 71 reported heroin related overdoses in Sarasota County, including 32 in the month of March alone, resulting in 14 deaths. In response, Sarasota County Sheriff’s Office launched an enforcement campaign called “Operation Spring Smackdown” with the hope of alleviating the opiate crisis striking the community and the nation at large.

It’s believed by the Sheriff’s Office that, “…what once was an era of crack cocaine evolved into prescription pill abuse and now we’re battling opiate addiction,” Community Affairs Director and Media Liaison at the Sheriff’s Office, Kaitlyn Perez, wrote in an e-mail interview. “This epidemic, while it’s technically a societal problem, has fallen into the lap of law enforcement and for that reason, we felt [it] needed a focused effort.”

The name for the campaign originates from the replacement name for heroin, which is commonly referred to as “smack,” and it was carried out throughout the month of March through a four-pronged approach of enforcement, prevention, education and treatment. With each portion of the operation being executed using the available resources and efforts of the law enforcement, the issue still requires active participation from community members in order for it to be successfully resolved.

“We would like to remind the community that this isn’t something we can squash on our own…” Perez said via e-mail interview. “We will do what we can, but we want the community to know that we can’t do it alone.”

Representative of enforcement aspect of the campaign, police have arrested 28 individuals involved with dealing or using opiates or narcotics in March. These individuals have an accumulated 332 prior felony charges. Following the four-pronged approach, it is believed that prevention is enhanced, “…by deploying resources to strategic locations in order to prevent overdoses and other crimes before they can occur,” as Sheriff Thomas Knight explained in a recent press conference. The intelligence-led method of policing, known as Intelligence to Action (I2A), is utilized in order to identify the areas that need the most attention, which is where the resources would be deployed to.

By talking to the families, friends and neighbors of abusive narcotic users, the police have hoped to educate the loved ones of the addicted in order for more interventions to occur amongst the community members, which is key for successful harm reduction take place. In this attempt to give information on the substances, the aim is so that those most closely associated with the overdose patients can understand what heroin is doing to those around them in a deeper sense.

Our own New College Police Department (NCPD) Chief Michael Kessie agrees with the importance of education in the community as well.

“As a community, New College has always looked out for one another. Now, more than ever, it is important to let someone know if a friend or fellow student needs help. Report it to an RA [Residential Assistant], faculty member, Student Affairs, the CWC [Counseling and Wellness Center], or Campus Police,” Kessie wrote in an e-mail interview.

Lastly, treatment is an essential aspect of this operation as it is the step that most directly affects damages done to individuals on themselves. Currently in the county jail, inmates are provided with Vivitrol, an antagonist or blocking medication that can help prevent relapses into alcohol and opioid abuse. It’s a good choice because while some other medications to opioid abuse can be addictive themselves (causing further problems), Vivitrol is not.

Other treatment options include Naloxone which treats narcotic overdoses in emergency situations. By giving the individual in need extra time, medical assistance can arrive in order to transport the individual to the hospital, hopefully in time. It is an injectable medication that can tear through clothing if need be and should be applied to the side of whichever thigh of the individual.

“Each officer is equipped with two doses of Naloxone. It is the exact drug that is carried by the Sarasota Sheriff’s Office,” Kessie wrote. “Campus Police and other Law Enforcement Agencies participate in the prescription drug take back program to help get excess medications of all types out of circulation.”

The Drug Enforcement Administration (DEA) carries out the National Take-Back Initiative (that Kessie was mentioning). The next will be on Apr. 29, 2017 from 10 a.m. to 2 p.m. It serves to, “…provide a safe, convenient and responsible means of disposing of prescription drugs, while also educating the general public about the potential for abuse and medications,” according to the official site of the DEA.

A real factor causing the destructive wave of the opiates is the fact that fentanyl, an extremely lethal narcotic that has high risk for addiction and can easily result in death when mixed other substances like alcohol, has been “stamped to look like oxycodone,” Sheriff Knight mentioned in a press conference. The issue is that when users are taking their prescription pills they are taking the dose necessary if it were oxycodone, but fentanyl is up to 50 to 100 times more powerful and equally as lethal.

“The solution to the fentanyl issue is to have drug test kits and allow people to test the drugs they’re going to do,” member of Students for Sensible Drug Policy (SSDP) and second-year Zachary Schoenblatt said. However, some may say that allowing people to have these kits would actually encourage them to take drugs. “People that are addicted to heroin are going to do heroin regardless. So, giving them a test kit doesn’t encourage them to do the drug, it encourages them to know what they’re taking,” Schoenblatt continued.

According to the American Society of Addiction Medicine (ASAM), drug overdose is the leading cause of accidental death in the U.S., with 52,404 lethal drug overdoses in 2015. Of those total deaths, 20,101 were related to prescription pain relievers making opioid addiction the driving force of the epidemic. Since then, the issue has only worsened.

With all this in mind, it’s imperative that we stay informed, supportive and positive in the midst of this crisis. It’s not easy losing loved ones, especially not in such a way. It is our duty in a way to help in getting rid of the epidemic, but most importantly we must keep each other safe and ready for any situation. Pairing medication with support programs generally has the most success and that’s why both the Sarasota County Sheriff’s Office and Campus Police emphasize the importance of community member input.

There isn’t going to be much difference on campus in terms of policies or procedures that the Campus Police will be taking up.

“We continue to assist other Law Enforcement Agencies as requested and investigate violations of drug laws as we always have,” Chief Kessie wrote in an e-mail interview. “Education, friends and family who can identify the problem someone may be having and work to help them, and enforcement of current laws,” is the best way to solve the problem according to Chief Kessie.