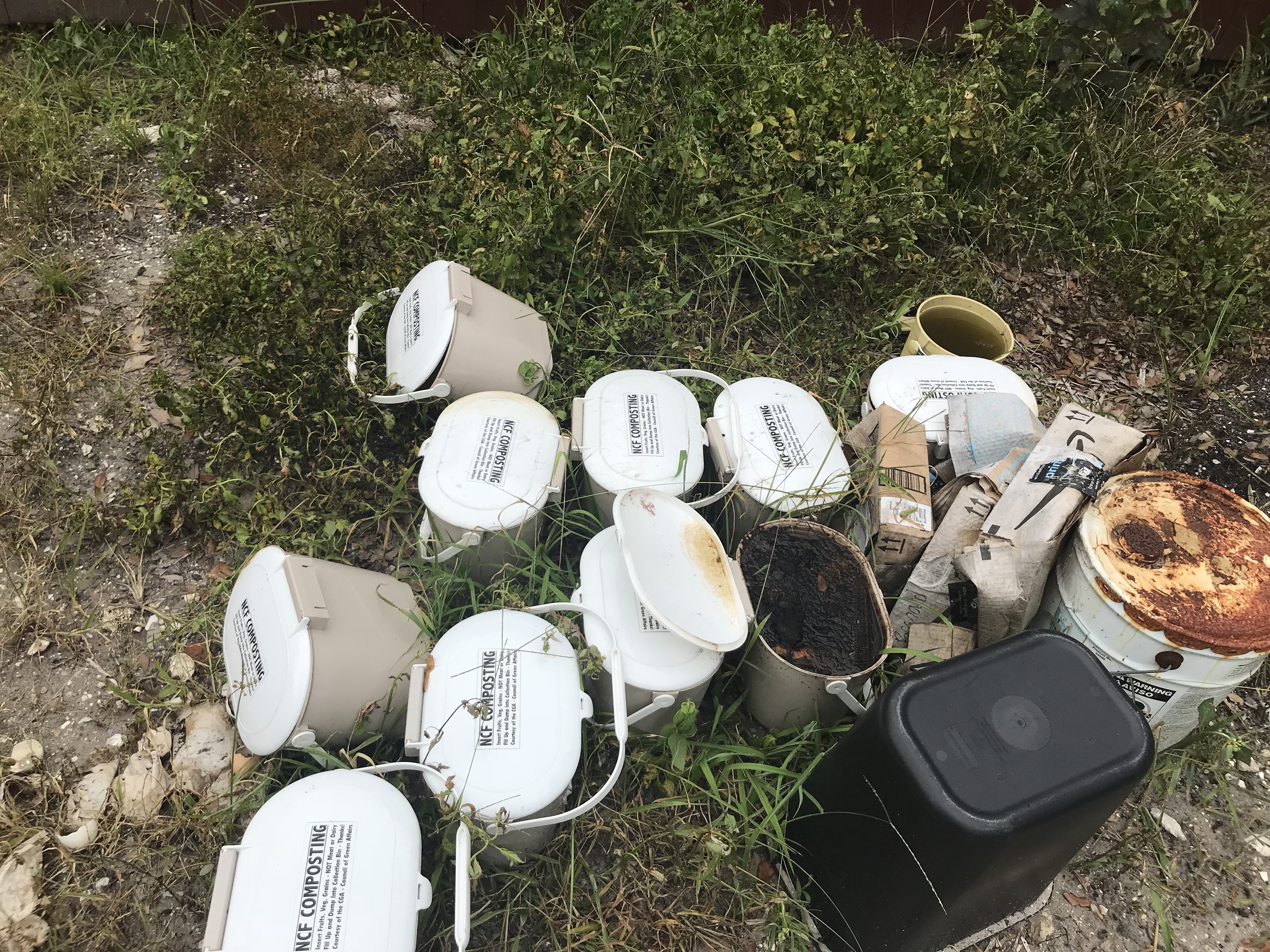 Plentiful food scraps, water and proper machinery all help the compost program thrive at New College. But one of the program’s most significant barriers to success has been the campus’ lack of care while dealing with the composting resources. Whether it is items going missing from the compost house or students leaving the compost bins to grow moldy over the summer, the compost teaching assistants (TAs) are often left dealing with messes that are outside of recycling food waste.

“The compost TAs are overseeing the full compost production on campus and dealing with doing the compost itself,” thesis student and compost TA Salua Rivero said.

“We’re also doing the compost tutorial and educating the community and outreaching to everybody at New College about compost,” compost TA and second-year Francesca Galliano added.

Composting is the natural process of recycling decomposing organic material such as leaves and vegetable scraps into a rich soil amendment, known as compost.

“Compost is really good soil that helps plants grow better,” Rivero noted. “[Campus] food waste is helping us create compost that will be used for the New College garden, and the most important thing is using the food to recycle it so we can make more food—that’s the whole point of the compost. To be more environmentally friendly on campus, there needs to be compost—its essential.”

With the help of two tutorial students and two former compost TAs, Rivero and Galliano are responsible for keeping the compost program alive on campus.

“There is nobody hired in the staff or administration to help with compost—it is all student-run,” Rivero said. “We go through [Student Government Business Manager and Coordinator] Dawn Shongood to buy things, and that’s it.”

Most of the food material for the campus compost comes from the Hamilton “Ham” Center kitchen, where two bins in the back of the cafeteria are used to compost the food that the kitchen doesn’t use.

“[The other TA and I] worked on getting the program up and going again, because it was kind of on the downside,” Nolan said. “People would say that the compost is out, or people wouldn’t know it was happening. We definitely did a lot of work.”

Despite the efforts of the compost TAs to sustain the program on campus, a portion of the student body contributed to some obstacles to the program’s mission by neglecting the individual composting bins given to students to compost their own food waste.

“People just ditched their individual bins filled with rotting waste over the summer [of 2018],” Nolan said. “Housing got really upset with that, and they were saying, ‘It’s not Physical Plant’s job to clean these, we’re not going to do that.’ They sent pictures [of the bins]! They were upset because it was a health hazard—which it is! We want to change how [students] take care of the bins and the compost.”

“People treat the compost like its garbage sometimes,” Rivero noted. “We’re working on getting labels and flyers to educate what is acceptable to compost.”

“We want to find a better process for distributing the individual compost bins,” Galliano said. “Like having people write down their names and the bin number they get and holding them accountable for the bins.”

“We’ll make it easy,” Rivero continued. “We’ll say something like, ‘We’ll be in Ham [Center], come at this time to drop off your compost bins at the end of the semester.’ [Keeping a log] would also be a solution to the problem [with collecting the compost bins]. Still, one of the biggest issues we have is that nobody is here in the summer and nobody is taking care of the compost; everything just falls through in the summer.”

“There are a lot of issues that need to be fixed within the compost system itself that cost a lot,” Rivero added. Currently, the compost TAs need to fix the tumbler and figure out how to replace the parts. The tumbler is a barrel that turns to break down the organic material while infusing a fresh supply of oxygen.

Still, despite all the obstacles for creating an efficient composting process, the compost TAs’ enthusiasm for composting and recycling food waste is unwavering.

“I love compost!” Rivero said. “Food waste is a huge problem everywhere. Instead of going to landfills and being thrown into trash cans, food should be recycled and put back into the earth.”

Once in a landfill, organic material may react with other materials and create toxic leachate. Toxic leachate is a black liquid mixed with organic and inorganic chemicals, heavy metals and pathogens. This liquid can pollute groundwater and pose a health risk. Moreover, food waste in an airtight landfill interrupts the earth’s natural cycle of decomposition, which plays a vital role in the health of our environment. Research indicates 72 percent of all materials entering landfills can be used for composting.

Future goals of the compost program include restoring the compost house to a student-welcoming place.

“We want to organize the compost house so we can make it a place where students can come and hold events that educate students on what compost is.”

Information for this article was gathered from extension.uga.edu and epa.gov.