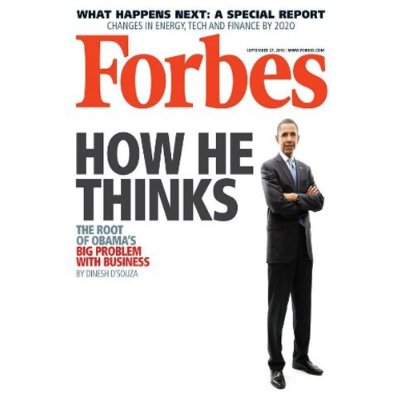 The cover of Forbes’ Sept. 27 issue, promising a new and less birther-like way to understand and demean President Barack Obama. Little did readers know how demeaning — and telling — the article within would be.

With mid-term and other elections coming in November, the culture wars are reaching a boiling point. The latest lobster to climb out of the pot is Dinesh D’Souza, an Indian American author and President of The King’s College, New York. D’Souza’s impressive accolades also include a fellowship at the Hoover Institution and a senior position in the Reagan White House. His published works, though, speak greater volumes : What’s so Great about America, What’s so Great about Christianity, and The Enemy at Home: The Cultural Left and its Responsibility for 9/11 were all New York Times bestsellers, representing just a drop in the boiling bucket of his corpus.

D’Souza’s next book, due on October 4, is entitled The Roots of Obama’s Rage, and America got a preview of it in Forbes magazine’s September 27 issue. Before you read a few of its choicest morsels, know that Newt Gingrich, former Speaker of the House of Representatives and potential Presidential candidate, had this to say about it: “I thought it was the most profound insight I have read in the last six years about Barack Obama.”

Now on to the main course. D’Souza brings all of his chops to bear in explaining why “the President’s actions are so bizarre that they mystify his critics and supporters alike.” You see, his father was a “polygamist,” a “wife-beat[er],” a “regular drunk driver,” and something actually relevant to D’Souza’s point, an “anticolonialist.” What is that, you ask? Is it someone who opposes slavery? Is it an individual who throws their support behind the self-governance of oppressed peoples? Perhaps it’s someone with power who is willing to use it to try to remedy the wrongs of the past.

D’Souza defines it as a person who endorses the obviously absurd observation that “poor countries may be nominally free, but they continue to be manipulated from abroad by powerful corporate and plutocratic elites.” A plutocracy, by the way, is a place where the wealthy wield political power along with their economic influence. A place where the same laws don’t apply to them as to the poor because they write those laws. A place, perhaps, where lobbying runs rampant and a supposedly independent judiciary literally enforces the idea that political candidates can be bought.

By way of proof that Obama takes after his father, D’Souza makes one of his characteristic “profound insight[s]”: “Notice that his [autobiography’s] title is not Dreams of My Father but rather Dreams from My Father . . . he is writing about the dreams he received from his father.” D’Souza’s final bit of education for Forbes‘ readers is as follows: “Colonialism is a dead issue. No one cares about it but the man in the White House.”

So if colonialism is a dead issue, why are many of the “elitist” academics D’Souza criticized in Illiberal Education: The Politics of Race and Sex on Campus endorsing postcolonial theory and its many implications? Furthermore, why is he even writing about it? His definitions of neo- and anticolonialism smack of the implication that agreeing with these theories in this day and age is reactionary; a wild goose chase.

Forbes‘ best effort at recovery from the embarrassment of D’Souza’s cover story took the  form of an accusatory blog post by Reason Foundation senior analyst and Bastiat Prize winner Shikha Dalmia. Even she agreed with him about anticolonialism itself, though, calling it “a world view that is now passé even in the Third World where it originated, thanks to the post-liberalization success of the Indian and Chinese economies.” Last I checked, China only started being regarded as a successful economy this last decade, so did postcolonial theory just now become “passé” or did conservative writers just now start telling their readers they should already have thought it was?

Apparently Newt Gingrich didn’t, and the proof of that is perhaps the sweetest tidbit in all of this. Associate Professor of Political Science and blogger Laura Seay recently discovered that she and Gingrich have something in common: a PhD in African Studies. His was technically in History, but it concerned education systems in the Belgian Congo. That’s right, the Belgian Congo that was the personal property of King Leopold II until 1908, and one of the most mercilessly extractive and mismanaged European colonies in Africa until 1960, soon after which it descended into unending civil war and—you guessed it—plutocracy. It remains in that state to this day, with the notable exception that some factions took on genocidal goals in the 1990’s along with their neighbors in Rwanda.

All of this death might have been avoided had the Congo become a representative democracy, a statement D’Souza and Gingrich would no doubt echo. The trouble was that a coalition of the United States, Britain and Belgium assassinated the Congo’s first and only democratically-elected Prime Minister less than one year after he took office. Why? Because they were afraid he would turn the Congo into a colony of the USSR.