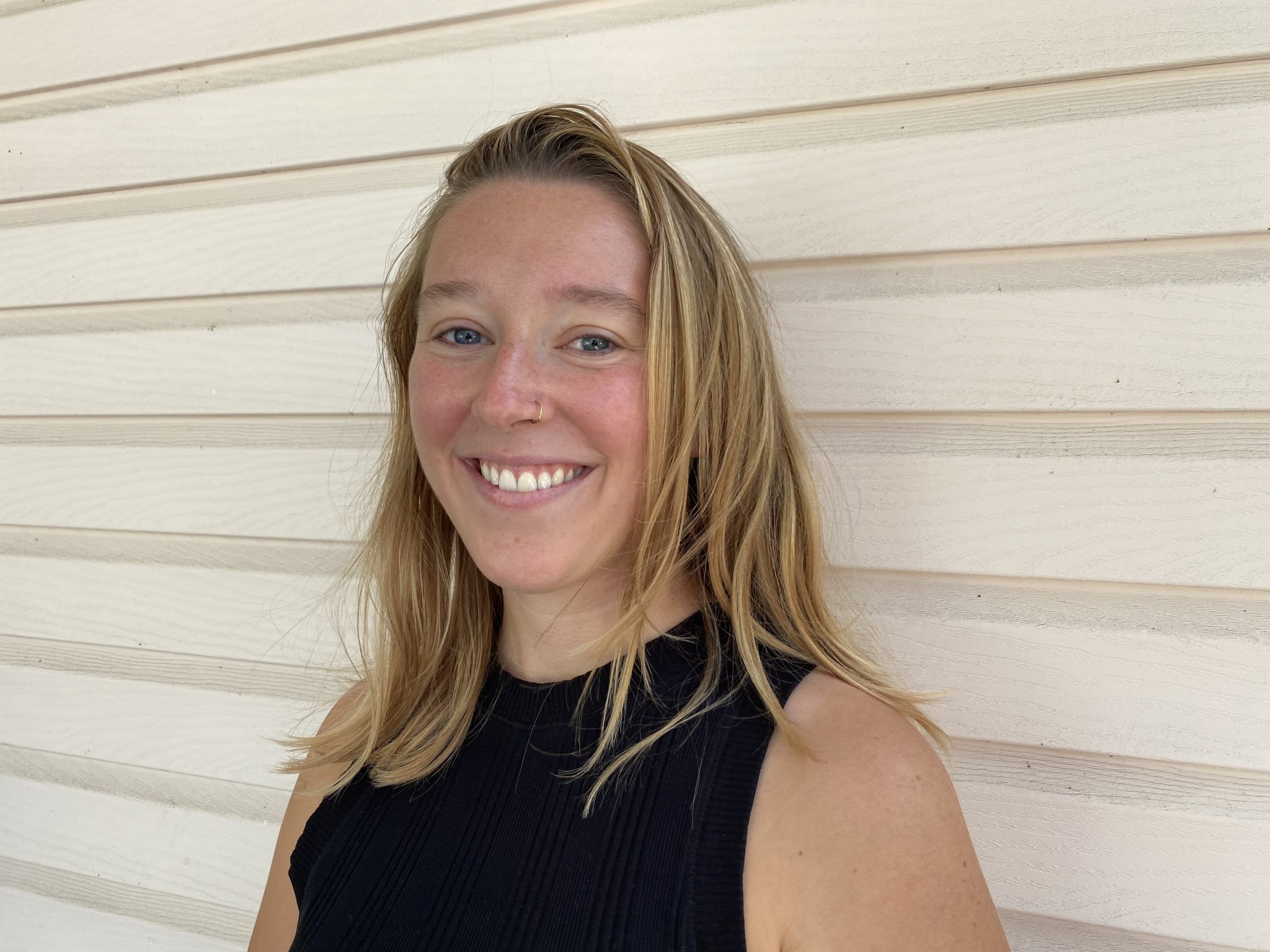 A portrait of Cassie Manz ('15), the author of this post. As a student at New College, Manz also served as the Catalyst's Copy Editor.

My goal in writing this piece is to offer an example of what post-graduate life can look like. Everyone’s post-grad experience is different, and the beautiful thing is that it’s always changing. But it’s no secret that adjusting to life after college is a challenge. I hope I can offer you an honest picture of what my experience has been, with all of its ups and downs. I knew things would change after graduating, but I wasn’t prepared for how all-encompassing the change would be or how quickly it would happen. You might benefit from this piece if you are a student who is scared of what comes after graduation. I know not everyone is anxious about life beyond New College, but I definitely was. If reading this piece helps you in any way, makes you feel a little less alone in your journey after college or less apprehensive of the future, that would be more than I could hope for.

So, here’s an outline of what I have done in the two years since I graduated from New College on May 19, 2019.

I subleased a room in Sarasota for the summer. About a week after I left campus, I started a full-time internship in marketing and public relations. Looking back, I wish I had given myself some time to rest and reflect. I had just finished writing a thesis, and in the month leading up to commencement it felt as if I had only slept a total of 10 hours. I was exhausted and burnt out and also just sad. I wish I had spent more time considering whether or not to take the internship or applied to a few more jobs before jumping into something. So here’s my first note: don’t be afraid to give yourself a breather after graduating. I don’t mean remaining unemployed when you have rent to pay, but don’t force a “career move” when you are not ready and not sure what you want to do. Sure, sometimes trying different things is the best way to figure out what you do or don’t want. But it’s also okay to work a temporary job or something outside your desired industry in order to make ends meet while taking time to think about what you really want. It can be helpful to process leaving college before jumping into something you think you should be doing. Something I’ve learned from therapy is that you get to decide what your life looks like, and what your timeline should be. This may sound obvious, but I spent so long making decisions according to what I thought was right, or what I should be doing. What I’m saying is don’t rush into a job just because you think you need to “use your degree” immediately.

That first summer post-grad, I spent many afternoons crying on the way home from work. I said goodbye to pretty much all of my friends over the course of three months. I felt jealous of everyone’s big plans and ashamed of the lack of my own. I was unsure of what to do next. After a summer of keeping things up in the air, I committed to staying another year in Sarasota and signed a lease. In hindsight, although I was nervous about it, that turned out to be a good choice for me. At the end of the summer I finished the marketing and public relations internship and started working at a popular grocery store chain.

In August 2019, after a month or so of working at said grocery store, I began interning at a local radio station as a news production assistant. This was my first experience in radio production, and I discovered that I really enjoyed it. Everyone who worked at the station was wonderful and I loved becoming a part of the team. In addition, the station was very engaged in the local community. Working there gave me a new sense of community and belonging that I was missing after graduating from New College. I was pleased to help produce the show that focused on local issues and activism. I felt I was contributing to something meaningful and positive.

In November, I was promoted to News Producer. I was really excited to do something totally new and different: produce a weekly radio show all on my own. I worked part-time at the grocery store and part-time at the station. It was challenging to manage both of these jobs, especially in regard to scheduling. I stopped working at the grocery store in February 2020. A few weeks later, the state shut down due to the coronavirus pandemic.

It’s hard to think back and write about the period that came next. My lease was ending in September and I knew I wanted to move out of Florida eventually, but I wasn’t sure where to go or what career path to follow. By last summer, the pandemic was only getting worse, not better like so many people had first thought it would. Any tentative plans I did have were upended. I had been considering applying to graduate school but I was still thinking about the advice my New College professors had given me (whose opinion I still hold above pretty much anyone else’s). Before I graduated they had advised me to hold off on pursuing a History PhD right away, and encouraged me to gain more work experience. This is still some of the best advice I’ve ever received from professors. So here’s another note: You have all the time in the world to go to graduate school, so you don’t have to rush it. I think for people like me, it can be better to gain work experience and be sure of what you want out of graduate school before making that commitment.

So in September 2020 I moved out of Sarasota and back into my parents’ house. Since then I’ve been searching for a full-time job in my industry. For a few months I really took the time to think about what I want to do, what inspires me, and what I’m passionate about. I had a revelation during an acupuncture appointment that I wanted to pursue my passion for documentary film and documentary journalism. For the past several months I’ve been researching the industry, networking, and looking for opportunities in film production. In the meantime I have been substitute teaching at local schools, which has been really wonderful and fulfilling.

One of the best things I have done so far since starting this new job search is reach out to the career coaches at the CEO. After meeting with Dwayne Peterson my whole approach to the job search has changed. I truly cannot recommend reaching out to the career coaches enough, especially for recent post-grads. As an alum I had assumed that the CEO was no longer a resource for me, but that’s not true at all! Meeting with Dwayne has demystified aspects of the job search that felt overwhelming in the beginning. There are so many things about job boards, resumes, and application strategies that I didn’t know. Meeting with him has been invaluable, and has set me on a new path where I feel so much more competent.

There are a few additional important, helpful things that I would recommend. One is reaching out to friends who are in the same boat (aka unemployed). A few months ago, I started meeting weekly with some friends from college who are all living in different places, but are all in a similar post-grad job search. Every Monday we FaceTime and check in about our job updates, ask for advice, offer support, and make a plan for the week. Having that accountability and solidarity in the job search goes a long way. The full-time search can be demoralizing and exhausting. You pour your heart and time and energy into applications for positions you would love to have, then never even get a rejection email back. Often it can feel overwhelming, and as if you might actually spend your whole life applying for work and living with your parents. Meeting with friends and talking about the job search process and about inevitable rejections can make you feel less alone and less ashamed. It can also help motivate you to keep putting yourself out there!

The other important action I would recommend is networking. I have long dreaded networking and had convinced myself that I would never have to do it. But this year I finally started networking, easing into it at first by connecting with other New College alums. Now that I’ve started, I actually feel very proud of pushing myself outside my comfort zone. It gets so much easier after the first phone call with a stranger, and it is so rewarding to have those great conversations that give you new ideas and new inspiration. Most importantly, I’ve realized that most people are eager to help others and that everyone at some point has been in the boat you are in now.

I’ll wrap up here. Sometimes when I think of being at New College, it doesn’t feel like long ago at all. It’s shocking to think that two years have gone by. The person I was at New College is an old version of myself. Not a bad version, just different. Sometimes it can be hard to let go of old versions of our selves. I’ve felt sad to get further away from college, but there’s no other option. I was so scared and anxious about graduating. I didn’t want it to happen. But time moves forward, inevitably. There are so many paradoxes of life that I’ve never liked. One is that the terrible and wonderful reality is that nothing lasts forever (I have a feeling that’s a quote somewhere). Everyone wants the good things to never end and the bad things to never last—and each thing happens anyways.

I know this piece won’t relate to everyone. Not everyone likes college, or New College. Not everyone is scared of becoming a post-grad. But the truth is that you will probably never have an experience like this again. You won’t live this close to all of your friends again and you won’t have this much free time again (even though you probably think you have no free time).
This type of community will be hard to create again. I think that’s just the reality of post-grad life. Something that has brought me comfort is knowing that I won’t build the same type of community that I had at New College, but I will build something. It just won’t be the same. But that’s okay.

Most importantly, you don’t have to listen to any of my notes or recommendations. It’s cheesy but true that everyone’s journey is different and unique. The most important thing I’ve learned from networking is that everyone gets there differently. “There” being that good job or perhaps just the moment where you no longer feel so lost. I hope reading this has helped pass on some advice or just given you a window into a post-grad experience. To end, here are some quotes I’ve had written out on post-it notes for the past few months since I moved home. I hope they can give you some inspiration or peace or comfort as they have given me.

“The things that are meant for you will come to you.”

“Don’t surrender all your joy for an idea you used to have about yourself that isn’t true anymore.”