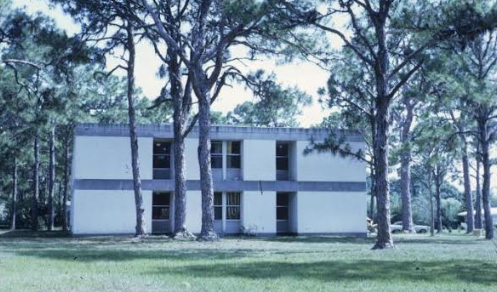 No. B Dorm is not rapidly sinking into the ground, as some might say.

Sitting pridefully as a bright blue beauty on the academic side of campus, B Dorm is the last remaining Palmer Building still used as a residential hall. Other than its location, B Dorm stands out for its communal-style bathrooms and its reputation for individuality, community and – to most Pei campus dwellers – mystery. Until now.

New College was founded in 1960 and accepted its first class of students in 1964. (Fun fact: That first class included 101 students. Originally, 100 were admitted. However, the 101st student  Ted Held (‘60) hitchhiked 2000 miles to the campus without acceptance. “His strong desire for an education earned him a place as the 101st member of the Charter Class,” said a September 1965 issue of the Catalyst.)

World-class architect I. M. Pei was hired to design New College’s campus in September 1963. Later that month, Pei told the Sarasota Herald-Tribune, “New College is the greatest challenge I have ever faced.”

Before financial problems caused him to resign from New College in 1967, the Pei courts were built. Previously, the campus was simply the Charles Ringling mansion (now known as College Hall), the land between it and US 41 and a little bit of land past US 41. Pei originally wanted to knock down College Hall and make room for dorms on the bay. According to the Sarasota Herald-Tribune, it was believed he also wanted dorms on stilts over the bay at one point. Going past US 41 was a last resort.

A March 1965 edition of the Catalyst said students were readying to move into the new dorms on the eighth of that month. While the dorms were being finished, the Charter Class called a motel on Lido Key and “the barn” – now the Four Winds Cafe – home. In December 1965, the Catalyst published that Pei was reportedly disappointed with the response to his dorm designs since only one student sent him a letter of praise.

On May 12, 1967, it was announced that married students were now allowed to live in dorms. Two weeks later, single occupancy rooms were opening up for the first time to students.

However, it was on Friday, June 2 when plans for dorms on the west side of campus were first approved.

“Plans to build new dormitories and an academic complex on the Palmer (West) Campus were approved at a joint meeting of the Executive and the Architectural and Plant Committees of the Board of Trustees,” the June 9 issue of the Catalyst stated. The goal was to have the Palmer housing complete by the fall semester of 1969. On Nov. 29, 1967, New College was officially accredited.

In March 1968, plans for an “instant campus” on the west side were presented to the Board of Trustees, who at that point declined to provide an immediate decision. The “instant campus” was to be low-cost project completed in six months using concrete block construction. Most of the rooms would be single occupancy and share a bathroom.

In fact, an issue of the Catalyst stated, “[President John Elmendorf] indicated, however, the college was definitely interested in discontinuing the use of the I. M. Pei-designed buildings on the East Campus by students.”

Why? High-operating costs from private bathrooms and heating/cooling systems. In April 1968, there was still no decision on the “instant campus,” which called for a $1.5 million dollar complex including dorms, classrooms and dining. Previously, Elmendorf said the probable completion date was January 1969.

Finally, on April 13, 1968, the Board of Trustees gave the go ahead to the “instant campus.” The catch was that a joint plan to rent out the Hamilton center (the east side of campus) “to executive groups on a management basis” needed to be approved first.

“The Executive Committee authorized the start of construction only if the contract with corporations interested in using the East Campus as a conference center is signed,” the April 14 issue of the Catalyst said.

In May 1968, the plans for the east campus to become “New College Conference Center for Continuing Education” were approved by the Board of Trustees. Simultaneously, Miami architecture firm Pancoast was contracted for the design of undergraduate facilities on the west side of campus – what would become the Palmer buildings. Ground was to be broken as soon as possible – potentially within a month. On May 23, plans for the west campus – including blueprints for dorm designs – were presented at an open house. By the end of May, student suggestions were added to the architect’s plans.

“Each floor of the two-storied cottages will house 10 students in 6 single rooms and 2 double rooms. The rooms will be built around three outside walls with a living room in front and a large bathroom in the center,” the May 30 issue of the Catalyst reported.

The Dec. 5 issue of the Catalyst reported that the groundbreaking for the new residences was scheduled for the following week.