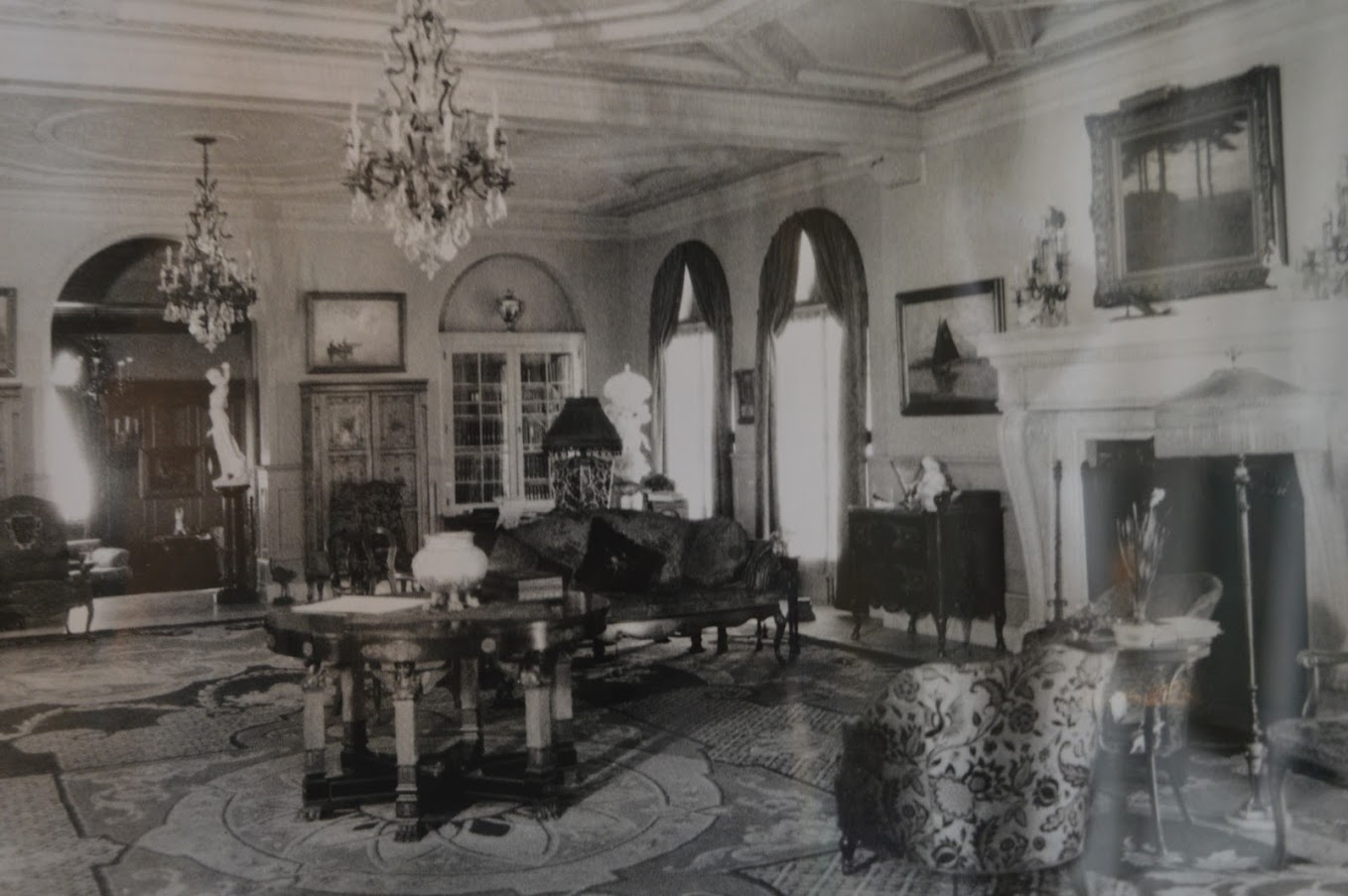 The ghosts of the Ringlings' past likely creep around our campus.

Ninety-one years after the death of Charles Ringling, ghosts and spirits continue to swarm the dusty halls of College Hall and the eerie corners of the rest of campus. The Catalyst asked current students and alumni to share their spooky stories. What follows are their ghoulish responses.

“It was fall of my first year, when I was still pei-ing my dues in the mold hole that is first court. A few friends of mine decided that they wanted to play with the Ouija board. I’ve always been into the paranormal and I’m familiar with Ouija, so I agreed to play, thinking it would be a fun opportunity to connect with ghosts of New College past.

Like I said, I like the paranormal and it’s sort of my forté. So, I get to be the Ouija talker (the one who asks the questions). I made my best effort to do what I thought got you good Ouija sessions: hoping for and thinking of positive interactions with some old spirits of New College. But of course positive intentions don’t work too well when the other 5 people in the room are scared shitless.

So we start the session. “Hello, is there anyone out there who wants to communicate?” With no time wasted waiting, the planchette moved almost too quickly to “yes.” Feeling hopeful that we’d contacted an eager spirit waiting to tell their story, I asked the being’s name. The planchette moved to Z, and my stomach dropped when I realized it was next on a quick path to O. Without saying anything to my fellow players, I immediately said “goodbye,” and luckily the planchette moves to goodbye too.

All of my friends around the board start asking me why I shutdown the session so quickly, not even letting a full name get out. I explain that there is a demon who comes through Ouija boards that plays on the fears of the inexperienced, a demon who according to legend is powerful, and in the closest consorts with Satan. This demon is named Zozo.

I burned sage in the room, said a prayer, and dipped. I do not fuck with demons. Apparently, the friends I had been playing with were not so aversed, and ended up playing Ouija to summon this demon three more times. They described being terrified of playing, but feeling the compulsion to keep playing (that is, of course, what Zozo makes you do).

We ended up having to hide the Ouija board for a while to keep the demons away. As to the residual demonic presence left after every time you summon demons? Our first-year RA had her grandfather, a Catholic priest, bless the whole of first court. The moral of this story is: don’t fuck with ouija boards, especially in first court. Our personal demons aren’t the only ones that haunt this campus.” — Emily Via 2015, third-year

“I did have a really weird experience at College Hall. Early early one morning (around 5 a.m.), I went out to sit in the cork tree to watch the pelicans for my thesis but it was raining hard so I went into the music room which was unlocked. I kept hearing the sounds of the building when it was occupied: voices just out of hearing range, murmurs and doors shutting and distant footsteps. It sounded like students actually, nothing particularly threatening but exceedingly compelling and like nothing I’ve experienced before or since.” — Susan Hirschberg (‘83)

“In the late eighties, Officer Andy Murray of the campus police told me that he was doing a building check in Caples Mansion in the wee hours of the morning one night when he heard a piano begin to play.  He said he called his wife from a phone in the building (this was before cells) and asked her if she could hear the music.  She was groggy from being awakened so late but replied that, yes, she could hear it clearly.  “Well,” said Officer Murray, “I’m the only one in this building, and I’m not playing that piano.”” — Rodrigo Díaz (‘84)

“I was working as a dispatcher at the cop shop around 1988 or 1989. I was dispatching one night, a midnight to 8 a.m. shift, and was working with Officer Paddy O’Boyle, who, if anyone remembers him, was a retired Irish New York City cop. Paddy’s call number was 86, and the officers would go around on patrol each night, checking on the campus buildings and roads, and report in all of the checks, which the dispatcher would log on the record. It had to be the middle of the shift, and Paddy calls in from Caples Campus.

“86 to, ah, university,” he said in his New York Irish flavored accent.  (you had to know Paddy.)
“Go ahead, 86,” I reply.
“I’m at, ah, Caples.”  He pauses. “Can you hear that, university?” he asks, and through the radio, I hear a piano playing.
I reply, “Yes, 86, I hear it.”  He pauses again.
“I just checked out the building, and the door is locked.” Another pause. “There are no lights on.” Pause again. “There’s no one in the building.”
“Uh, 86, where’s the piano coming from?”
“It, ah, sounds like the second floor, university.”
“Okay, 86, you might want to get back in the car now.”
“Ah, 10-4, university.”
I kid you not. I remember that conversation, the matter-of-fact manner of Paddy’s responses, and the tinkling sound of a piano, across nearly 30 years. Caples always made me nervous after that, from the iron chandelier above the front door to the creaking stairs leading to Professor Riddle’s office.

I had a really nervous laugh with Paddy when he got back to the cop shop that night, and I know I told my roommate about it. Creepy as it is, it remains one of my favorite New College stories. Those old buildings had a life of their own, there was a weight almost to College Hall, Cook Hall, and Caples that the newer building didn’t have. I never saw any ghosts, though I know a lot of people had similar experiences, but that piano played across the radio that night, and Paddy assured me no one was in the building. I don’t think I ever went to Caples alone after that.” — Michelle Volkle Noberini (‘87)

“In January of 1989, I left my room around sunset to go to the Pei 2nd Court ice machine. Inspired by the legendary Playboy Host and Bar Book (Battali, 1969) I was drinking Tequila Sunrises–the original kind, with lots of ice and creme de cassis in a tall Collins glass. I needed ice. I was sober…with the same kind of misplaced sense of adulthood that led me to affect a (tobacco) pipe, I didn’t start drinking my Sunrises until, well, sunset. I filled my Collins glass and headed back to my room.

As I passed the doorway to the 2nd Court lounge, I caught a flash of white in the corner of my eye. A short woman in white–white T-shirt, what looked like white jeans–was standing at the sink. She turned on the sink and then turned it off. Now all of this happened really quickly. I thought she was my friend Michelle, who often wore outfits like that, and she was cooking something in the 2nd court lounge, which was also something hippie chicks did a lot. I said “Hey Mi–…” but when I turned fully, the lounge was empty. I went in. Nobody was possibly in there. A fresh spray of water droplets spattered the sink.” — Troy Winfrey (‘87)

“We did have a bit of campus wide ghost-hysteria during my second year around Halloween. It mostly seemed to affect the Humanities types.” — Graham Strouse (alum)

“Around 1998, I had my first, and strongest visible, experience with a ghost in College Hall. I stopped to play the piano on my way through the Music Room after a class one afternoon. After playing for a few minutes, I looked up towards the window at the front of the room.

There on the window seat, I saw the cloudy outline of an old woman, just like those commonly depicted in documentaries. I began to chant HU (a sacred word like OM, meant to raise the consciousness and maintain a state of clear, loving calm), and tried to keep playing. I got the sense that she used to listen to music sitting in that very spot when she lived here, and had come to listen to me play. But I couldn’t control my racing, nervous thoughts as I grew more and more anxious. She started acting out physically, her activity intensifying with my anxiety. I felt sudden cool breezes, though everything was closed, felt something brush by me, and watched the sheet music almost turn. I couldn’t hold out any longer. I got up and rushed toward the exit, and felt a pinch when I crossed the middle of the room on my way to the door.

The sense I got was that I had lost a war of wills, and she was vindicated in her dominion over the room. It was hers in life, and she still owned it now from beyond the grave. I ventured back the next time I was there for class, and on the wall at the front window, found an old portrait of Mable Ringling (I think), identical to the apparition that had appeared there.” — Kitanai Veritas (‘97)