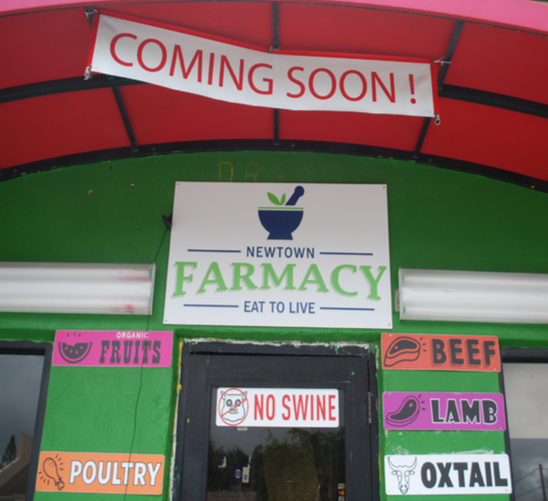 When a Winn Dixie off Tamiami Trail and Myrtle closed in 2010, residents of Newtown had to walk two or three extra miles south to get to Publix until the Neighborhood Walmart opened in the same spot a few years later.

The Historic African American community of Newtown did not always face such a delicate foundation of food security. In the past, there were many markets to choose from, most of them family-owned and all of them run by the black community.

“We had Cann-Major’s grocery, the Jenkins grocers, you had Eddie’s fruit stand which had all the fresh fruits and veggies you can think of– collard greens, navel oranges, grapes, bananas, peanuts, he had brazilian nuts, different pecans– it was a hell of a fruit stand,” Lance Shabazz, Newtown Native, said.

Today, most of the businesses remembered by the older generation are long gone. Shabazz’s explanation for this is that these businesses were “generated to stay in the community.”

Once money started going outside of Newtown – a change that first occurred with integration – the independently-owned businesses fell through the cracks.

Before Walmart replaced Winn Dixie, neighborhoods surrounding New College fell into the same food insecurity as Newtown. If you lived in the area and you couldn’t eat at the Hamilton Center (Ham) then you lived in a food desert.

At the time, the United States Department of Agriculture (USDA) defined “food deserts” as “low-income areas where a significant number or share of residents is far from a supermarket.”

Then, “far” was considered one mile in urban places and 10 in rural places. Now, residential areas facing certain obstacles to fresh food can be labeled by the USDA as food deserts within a half mile of a supermarket.

While most of Newtown no longer falls under the old definition with the Walmart there, recent tweaks to the USDA’s algorithm for food deserts requalified a few areas within the district.

“Newtown has been considered as a food desert because they don’t get enough produce and veggies,” Shabazz said. “This is what inspired us to open a farmacy, that’s f-a-r-m-a-c-y, eat to live, fresh fruits and veggies.”

The USDA’s concept of a food desert has undergone phases of expansion to incorporate different factors within food insecurity and create “layers” of food deserts.

Layers are formed based on individual issues affecting a tract, which is a zone or area designated by the USDA to collect data from. Here is an example.

The Amaryllis Park neighborhood in Newtown overlaps the USDA’s census tract 12115000300, a low-income zone out of reach from a fully-stocked produce store within half mile.

Atlas – the USDA’s interactive map of food deserts – states that the tract where Amaryllis neighborhood falls has “a relatively high number of households (437 of 1,448 total households (30.2%) without vehicles.”

The combination of low-income with a shortage of cars qualifies this area as a food desert within a half mile of a grocery store. This tract is color-coded in orange to differentiate from the green that designates areas fitting the original food desert measure.

Lack of mobility and transportation is not a new problem in Newtown. A few ambitious grocery stores used to deliver personalized orders of produce right to their neighbors’ doors.

“Cann and Jenkin’s grocery, you could call them up and put in all your grocery [orders] and they’d deliver them to you,” Shabazz said. “They had delivery trucks back in the 60’s cause a lot of people didn’t have cars so they would bring you your groceries.”

Fannie McDugle, Newtown resident since 1947, talks about Jenkin’s grocery in an oral history interview conducted for Newtown Alive!, a project completed by the Newtown Conservation Historic District’s and published this year.

“He had a truck, and all the older peoples who didn’t have cars or didn’t have a way to get around to shop…they would call in and tell him what they want and he would take the orders to them, from door to door,” McDugle recalled.

Even with the USDA’s attempt to incorporate the myriad of issues composing food insecurities, the very term “food desert” is criticized as undefinable. How do you factor in independent produce stands or personal gardens? In New York City, is half a mile comparatively “far”?

For people living in food deserts, eating can become a complicated and difficult daily chore. Without convenient access to fresh food vendors, people either get creative or turn to local convenience stores and fast food restaurants.

In Newtown, convenience stores dot along both sides of MLK and they’ve adapted to their customer pool. Nearly all of them accept Electronic Benefit Transfer (EBT) in order to serve customers using the Supplemental Nutrition Assistance Program (SNAP), or food stamps.

“You got four or five convenient stores on the streets and not one of them sells our people tomatoes, lettuce, cucumbers, they can’t buy veggies,” Shabazz said.

In another interview transcribed in Newtown Alive!, Thomas describes the items Moore’s had in stock when she was running the place

“We had all kind of fruits and vegetables, just everything… Fresh cheese, cracklings that you’d have to weigh, the two-for-a penny cookies that you had – everything.”

Today, the structure of Moore’s Grocery Store remains the same but the business itself has been altered completely. The array of produce Thomas describes is out of sight, out of mind, replaced by convenience store finds: chips, individually-wrapped cakes, soda and beer.

Half of one aisle is dedicated to a fair selection of dry ingredients – rice, sugar, flour – and canned goods (mostly soups). But not an apple or orange can be found today in Moore’s Grocery. Nevertheless, the store accepts EBT cards and SNAP.

“This community is built on social dollars so we’re gonna cater to the people on these programs where they can save money and eat healthier and live better,” Shabazz claimed. “We don’t have no sodas, we don’t have beer, we don’t sell cigarettes.”

Where gardens used to grow

Fifty years ago – give or take – Newtown was a gem of prosperity in a time where Sarasota was nearly all dirt roads.

Many people who grew up in the area still paint an idyllic picture of old Newtown, where everything one needed was in their backyard. A literal example of this is the abundance of home gardens that used to grow in Newtown homes.

“Practically every house that you would go by or visit had some kind of little garden out back or on the side,” Dorothye Smith, a Newtown Historian, recounts. “With greens, okra, tomatoes, and flowers – blooming flowers – and maybe you notice some of that, pass by certain homes and you see blooming flowers. That’s a continuation of what started back a long time ago.”