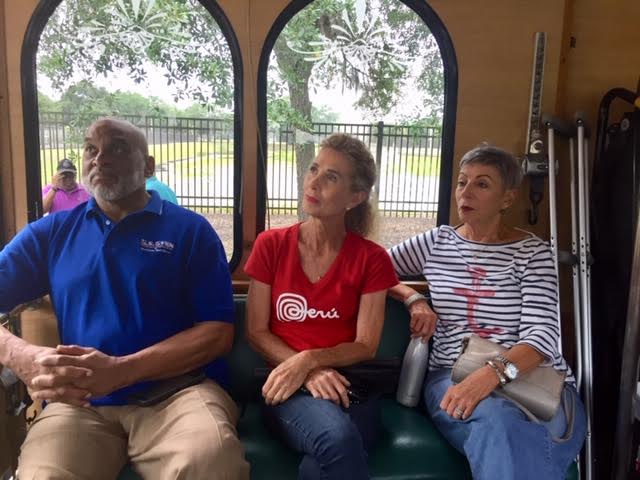 On a rainy Sarasota day a group comprised of tourists and curious residents hopped on a trolley to embark on an educational journey through Newtown. Visiting 15 historical markers throughout the community, the tour covered over 100 years of the history of the area’s Black community.

Originally, Newtown was known as Overtown and was located in the heart of downtown Sarasota. According to its website, the Newtown Alive tours and website are run by the Newtown Conservation History District (NCHD), which was formed in 2005 when former Sarasota City Commissioner Fredd Atkins brought up the need to preserve Newtown’s history. Newtownalive.org has been funded by the Sarasota County Neighborhood’s Department since 2016.

The tour began with the group meeting at the Robert L. Taylor Community Complex and gathering out front for a photo. The first stop was Children First, a nearby preschool where the kids on the playground waved eagerly to the trolley.

Another early stop on the tour was Jetson’s Creative Trend, a small, white building on Osprey Avenue, home to a longstanding hair salon and a nextdoor gallery commemorating Newtown’s history.

Jetson Grimes, the owner, greeted every person in the group with a hug as they crossed the threshold and then talked about his experiences of Newtown and the plans for future gallery expansion as they perused its displays.

“During segregation, we didn’t have access to outside this community, we had to provide things within the community,” Grimes said, following tour leader Vickie Oldham’s mention of the Lily White Society, an organization that aided the Newtown community with healthcare and treatment since Sarasota’s hospitals and doctor’s offices did not take Black patients.

“When we segregated, we were kind of successful, we had over 70 businesses,” Grimes said.

Grimes also discussed New College student involvement in desegregation and present community involvement and highlighted Into the Storm, a documentary about Newtown by a Booker High School student featured in the Sarasota Film Festival.

The group, reluctant to leave so soon, filed back onto the bus, water bottles that Grimes distributed to everyone in hand.

As the trolley weaved along the streets of what is today downtown Sarasota, tour leader Oldham chronicled the stories of prominent figures in the community, such as early Overtown founding member Leonard Reid.

“He took on odd jobs [in Sarasota], people recognized that he was an educated man being valedictorian of his college [in Savannah, Georgia], so they introduced him to Colonel Gillespie and that is how he became his right hand man,” Oldham said of Reid’s origins in the area.

“She was one of a kind…Miss. Susie was a character, if she was sweeping, you could not stand in front of this building, you had to move,” Gilbert said, explaining that her establishment was open to community teachers, ministers and personal friends as a space to get a drink and some quiet.

Gilbert supplemented Newtown’s history with their own experiences growing up there, bringing to life the people and stories behind small businesses formed out of necessity due to Sarasota’s strict segregation only decades prior.

Segregation also extended to the beaches marketed to tourists today and the 10-year fight for beach integration was also discussed on the tour.

“Activists opened up the beaches not only for Newtown residents but also for international guests that flocked to this beach every year,” Oldham said. “They can thank Neil Humphrey and members of the [National Association for the Advancement of Colored Peoples].”

Oldham also informed the group that the beach was approved as a marker on the U.S. Civil Rights Trail. At Lido Beach, the group got to visit  a plaque commemorating the efforts of Newtown activists towards beach integration.

As the trolley made the returning journey to Robert L. Taylor Community Center, Troy Nichols led the group in song, engaging with R&B classics such as Marvin Gaye and Tammi Terrell’s “Ain’t No Mountain High Enough.”

For more information on Newtown’s history and the tour, visit newtownalive.org.