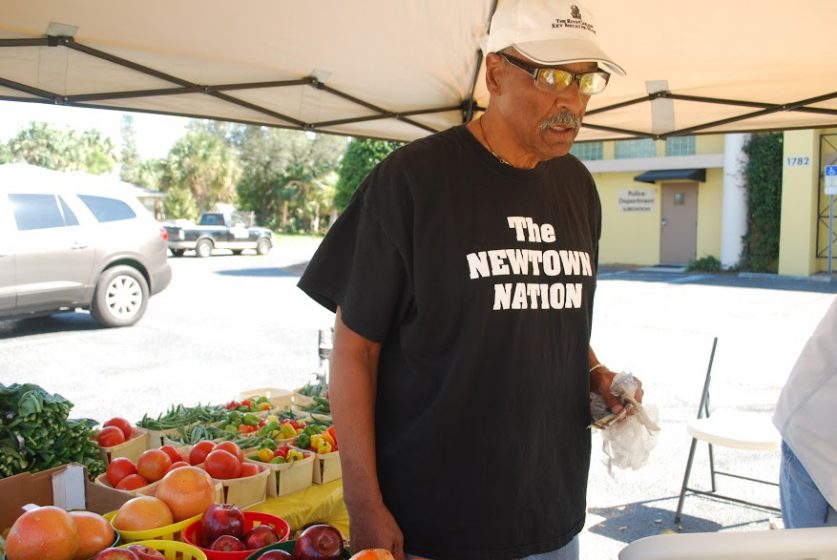 Lou Murray is many things. The first he’d probably tell you about is his position as a deacon at the Bethlehem Baptist church- the oldest church in Newtown. But he’s also the vice president of the Manatee/ Sarasota Democratic Black Caucus of Florida, a food security veteran and a grandpa. He’s retired and plays golf on Mondays. But mostly, Lou is a kick ass community activist.

This past Friday, a farmer’s market set up for the second time at the Redevelopment Office right off MLK way, in the heart of the Newtown neighborhood. From the street, the market looks like a makeshift stand with heaps of produce laid out on tables or in baskets- and it is. But it is also a potential hub for social enterprise and development in Newtown.

The driving force behind this innovative, open air market is Newtown Nation- a coalition of individuals for the wellbeing of the larger Newtown community. “We’re still putting a lot of pieces in place,” Lou Murray, Newtown Nation’s vice president and chair of economic development, said. “We’re going to sit down with our partners and take it to the next level but we did it. In a 1000 mile journey, half your problems are in taking that first step.”

The Newtown market— which kicked off on MLK day— will be held from two to five the first and third Friday of every month. Ideas for the Newtown market roll on endlessly, creating a vision that is unique to the Newtown community. Some plans include getting Pride of Jamaica on board, local jazz and reggae music playing, and tons of produce that fit the community’s tastes.

“We’re looking at our farmer’s market being a Caribbean-styled market,” Murray said. “Most of the markets you see here are what we call Eurocentric. We want to do something different. We want that Caribbean flavor.” One major goal of the market is to help enroll customers in any social benefits they qualify for such as Medicaid and food stamps. Newtown Nation set up a table in Hamilton (Ham) Center just yesterday to pull in students as volunteers at the market. There are several projects a volunteer can help out with; one is signing people up for benefits, another is writing grants for the market and they also need help with social media and web advertising.

“We are doing a lot of different tasks with economic and social development and trying to see how we can partner together with our efforts,” Valerie Buchand, the president of Newtown Nation, said. An organization with strong ties to the Black Lives Matter movement, Newtown Nation celebrated its year anniversary on Feb. 27. Murray said the group took off overnight. “There was such a great need for a group that knew how to put resources together, there was a lot of fragmentation and mistrust in the community. We wanted to be a conduit, a facilitator, a program that’s needed in Newtown.”

Sure enough, the Newtown Redevelopment Office heard about Newtown Nation and its goals for the community and contacted Murray himself. “They said we’re looking for a group that will be a liaison between us and the community so we can get some projects off the table and in reality. That’s where Newtown Nation stepped in and started taking one thing at a time.”

Newtown Nation’s latest project is the farmer’s market. They took on the mission back in November, with the goal of bringing fresh produce into the hands of the community.

“Food is a common denominator,” Lou said. “It’s always an important denominator when you’re talking about underserved communities. How do I get food? If you don’t address that how can you talk about anything else? It’s a basic necessity.”

Before the neighborhood Walmart moved in, Newtown was designated by the United States Department of Agriculture as a food desert- an area without suitable access to healthy foods. Even with the store, some parts of the Newtown remain out of reach of fresh and affordable foods and many residents still resort to the myriad of convenience stores in the neighborhood. “We are in the center of an underserved community,” Murray said. “We are also in an underutilized market in an enterprise zone, that’s what makes this market so unique, so important. It’s gonna be run by the community, developed by the community.”

Before the market could set up in the Newtown Redevelopment Office parking lot, it had to be approved by the city.

“I think we should make it easier to set up farmers markets,” Professor of Anthropology Erin Dean said. This semester, Dean is teaching Anthropology of Food. “My understanding is that they don’t zone a lot of places for farmers markets. Centralizing everything in downtown Sarasota does not make it accessible to people who aren’t close to downtown.”

Zoning is basically where planners in the county work with elected officials to determine what open land can be used for. The process varies significantly across communities.

“When I was in Sarasota back in 2007-2008, working at their health department, you couldn’t set up any farmers market,” Megan Jourdan, Community Health Specialist for the Florida Department of Health in Manatee, said. “Zoning regulations made it against the rules to sell produce or anything on the sidewalk outside of the downtown farmer’s market. We worked with them so you could apply for a permit to sell produce specifically.”

Interestingly, the city was already looking to have a farmer’s market set up in Newtown. “They had a lot of loosey goosey street vendors so they said we’re gonna have to start cracking down and requiring permits or you can be a part of the Newtown market under a liability waiver,” Murray said.

Murray explained that many vendors have come looking to partner with the Newtown market but they are looking to select vendors with their own liability who can “compliment what we’re trying to do. That’s why I want to get Pride of Jamaica in there that makes sense to us.”

“We started off with what we could control liability wise,” Murray said. “Eventually, we’re going to have other businesses coming in there, food business and clothing.”

For now, most of the produce at the Newtown market is sourced from farms in Palmetto and Arcadia. The market is in the midst of working out a relationship with the school district to use their food gardens. “That will be a part of it as well as the farm to school system- that’s the plan within the few months, to convert into that,” Murray said. “For the immediate community, we have to look at costs. When we work out our arrangement with the farmer’s through the school food system we can bring our costs down, that’s the whole strategy there.” One of the first objectives in constructing the Newtown farmer’s market was to get it certified by the USDA to accept the Electronic Benefit Transfer (EBT) system- food stamps essentially. The Supplemental Nutrition Assistance Program (SNAP) is a common EBT food stamp system. “The USDA was elated because we want to be a SNAP farmer’s market in an underserved area,” Murray said.

This part of the process was like Deja vu for Murray, who was the president of the Detroit Food Security Council back in the day. “It’s a national model now,” he said with a laugh. “I was the regional go to guy for food security. I was also on the advisory board of the Federal Reserve Bank and I was there when they created the EBT system, when it was a piece of paper.”

At the downtown Sarasota farmer’s market, there is one produce stand that is certified through the EBT system to accept food stamps. Brown’s Family Farm stand- located towards the end of the market strip- went to a government site to get approved for the system.

“Not many people use food stamps here, out of 100 customers I’d say maybe one person does,” Heidi Brown, the stand’s namesake, said. “I don’t know if they’re just not aware or what. We have a sign that says ‘check, cash, card and EBT.’”

It’s important to keep a balanced price point on fruits and vegetables in neighborhoods. “You have to develop systems that allow farmers to grow their food locally in a way that they can keep the price where it needs to be for residents to buy there,” Jourdan said.

“I try to find the sweet spot where it’s enough to make me a living but under retail grocery store prices,” Peter Burkard, the oldest vendor at the downtown farmer’s market, said. “I strive not to be out of reach price wise. I don’t want the local food movement to be seen as elitist or only for those who can afford it.”

“I don’t mind contracting with farmers, they’re going to be suppliers but when they come to our community door, we will be distributors, we will be the business,” Murray said. “You want to be working with those who serve the same population that you do. It’s no coincidence we’re working with Goodwill, department of social services.

“We’re going to be working with New College too- I can’t tell you how yet but you’ll be one of the first ones to know,” Murray teased. “It’s going to be huge. It will be an amazing announcement.” So keep your eyes peeled New College.