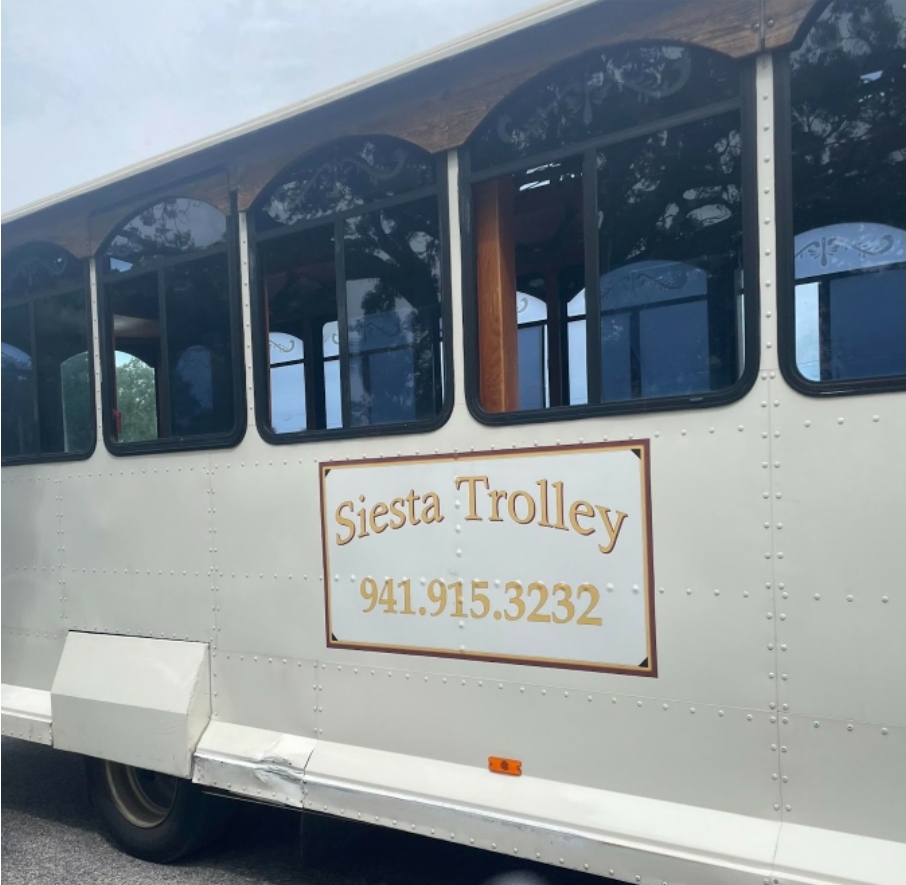 The “Siesta Trolley” one of Newtown Alive’s trolleys.

In 2016, a plan was proposed to Sarasota County by the North County Community Organization to document Newtown’s history, eventually forming Newtown Alive, an organization dedicated to recording and preserving the history of one of the oldest communities in Sarasota. Their work has overseen recordings of oral histories, mapping the Newtown Conservation Historic District and adding markers in places of historical significance to the community.

Newtown Alive has worked with a number of universities and other organizations to create a means of engaging the wider community, and this year’s tour was organized by Professor of Global English Jessica Young with additional collaboration and funding from the Office of Outreach and Inclusive Excellence (OOIE), who secured a sponsorship through the Andrew W. Mellon foundation. The facilitation of tours—self-guided and guided alike—of the historical markers around Newtown serves as a way to immerse oneself into the history of the space we occupy.

Newtown, beyond Newtown Alive, has a strong relationship with New College and surrounding schools going back decades.

“My first interaction with New College was in its formative years,” Walter Gilbert detailed, former President of the Sarasota chapter of the National Association for the Advancement of Colored People (NAACP) and Vice President of Diversity and Inclusion at Shelby Gardens. “My sixth grade teacher said, ‘Every Thursday you guys are going to go to New College and we’re going to have people tell you about Black history.’ To my amazement, the people teaching us Black history were white kids!”

“Literally, it was a Black history lesson, things I have never heard of before,” Gilbert continued. “That was really meaningful and impressionable for me, that not only did we know about our history, but everybody else knew our history.”“Students at New College have recorded some interviews that I didn’t get a chance to record because the people died by the time this project started,” said founder of Newtown Alive Vickie Oldham said, who is also President of the Sarasota African American Cultural Coalition, Inc, (SAACC). “I asked Erin [Dean] if we would be able to use her student’s work and she said yes! So these are some of the oral histories that are online.”

This all preceded the cultivation of the now fifteen historical markers placed around Newtown and where the tours are centered. There is an option to go through to each historical marker on a self-guided tour, but what the trolley tour provides is an experience and opportunity to hear Sarasota’s Black history through lived experiences.

Brenda Watty, an incredible performer and part of the renowned Motown girl group The Marvelettes, led tour-goers in freedom songs. Visitors are encouraged to sing along as the songs themselves hold huge historical and cultural significance.

These tours are part of a phase of a larger plan to create community centers in Newtown surrounding the preservation of historical sites and cultural heritage. The project began with meetings, research reports and mapping out Newtown, ultimately leading Newtown Alive organizers to announce plans for a 10,000 square feet community facility next to the Leonard Reid House, where the historical building will permanently stay after being moved three times on account of development pressures.

“Since May, it was on a platform and the community started getting mad,” Oldham described. “It’s time for some work to go on! Well, the work began in earnest last week when they lowered it onto a foundation. We are going to operate programs out of this house. Exhibitions, activities and all sorts of events on the lawn. We’re hoping that it will be a January, February opening.”

Much more is in store for the future of the Newtown community and for the wider Sarasota community to become involved.

“Those [New College] students at that time were valuable to our community, what they did was give themselves when they necessarily didn’t have to,” Gilbert recounted. “Somewhere, somebody in some kind of way had immersed themselves in it and knew it. They shared things with me that I had never heard in my house. I would say to your readers to maybe continue that. The history is there, the community is there and now they’re here to continue that.”

“We’d like for New College students to always participate in our programs, whether it be Newtown Alive trolley tours or what we’re going to do at the historic house, because Newtown and New College have a very close relationship,” Oldham announced. “We have history together. It’s great to see students active in voter registration and activities in the community, and we want that to always continue.”

“Whatever you do in your life, follow your dreams,” Watty declared when asked to give any advice or last words to students. “So many things can get in the way of your dream—don’t let it. Stay focused and do it.”

Oldham’s book, “Newtown Alive: Courage, Dignity, Determination”—written with Rosalynd Howard—can be found in the Jane Bancroft Cook Library, and students are advised to keep an eye out for an event later this semester with Oldham about New College alum Sofia Ali-Khan’s (‘96) new book “A Good Country.”