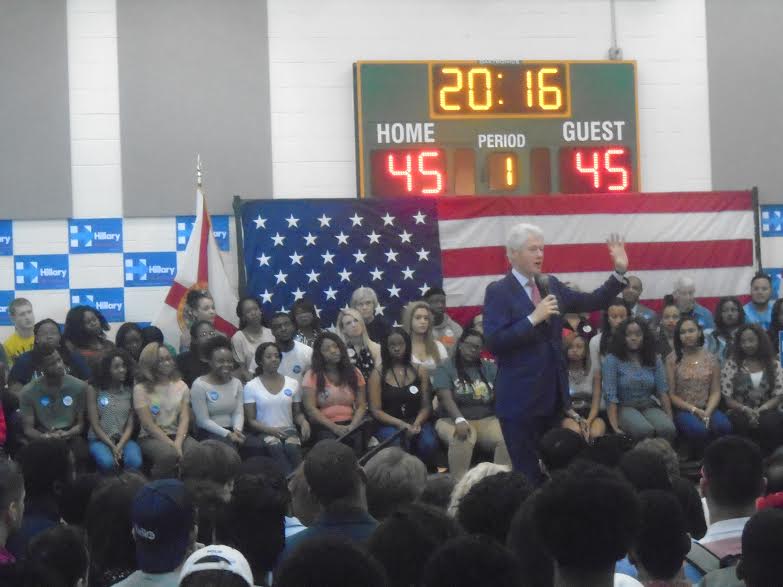 As an interning political analyst and a member of the Florida Capitol’s Press Corps, I have been able to witness many key political events as they happen. Here are a few highlights from the final few weeks of the Spring Session.

Bill Clinton calls for “an election about the future”

“If you believe we can finally grow together again, then it is obvious what we should do. We should make this election about the future, about our hopes and not our fears,” Clinton said in a callback to his use of Fleetwood Mac’s “Don’t Stop Thinking About Tomorrow” in his 1992 campaign. “Hillary wants this election to be about your future, it ought to be about taking responsibility for empowering everybody to succeed in America.”

In the first ten minutes of the speech, Clinton laid the foundation for a consistent theme of both his speech and his wife’s campaign when he praised President Obama’s progress. He asserted that the next president should not “reinvent the wheel,” but “finish the job,” in a subtle nod to his wife’s opponent, Bernie Sanders.

He was also quick to criticize the Republican party, and particularly the party’s candidates for their recent behavior and bickering.

“On the other side I can’t keep up with what’s going on, looks like a sixth grade food fight half the time,” Clinton chuckled, before turning his attention to reprimanding former Republican presidents for their role in the current economic crisis.

“Everybody but the top five percent did better when I was president than when President Reagan gave us the first round of trickle-down economics and no regulation, then because they tripled the debt, under both Bushes incomes fell for everybody,” he said. “You cannot grow an economy from the top down, you’ve got to grow an economy from the middle-out and the bottom-up.”

In addition to the economy, he highlighted Secretary Clinton’s history working on progressive issues such as criminal justice and healthcare, particularly her work on the acclaimed Children’s Health Care Program in cooperation with the late Sen. Ted Kennedy.

However, Clinton seemed to be most successful in gaining the attention of his millennial-heavy audience when he focused on Florida Republicans’ efforts to restrict voting rights after a series of 5-4 rulings to “gut the Voting Rights Act”, condemning them for trying to make it harder for “people who are younger, people who have disabilities, people who agree with our party (Democrats) to vote.”

“I think he assured everybody that Hillary is the right candidate,” Nelfrard, a FAMU student, said. “To be honest right now, I’m still independent and looking at all the candidates but I think he had a pretty good message and it’s something I feel like I can reach out and touch.” 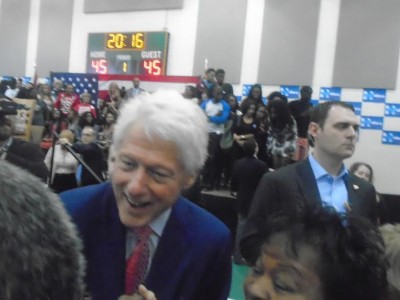 Next year, New College students like Mei-Jing Bernard will benefit from a decision made by the Florida Legislature in the final days of the 2016 Legislature.

Florida lawmakers approved $4.2 million in the new state budget to allow the school to complete the $8.9 million expansion of the Heiser Natural Sciences facility. The school will seek an additional $1 million to purchase new equipment for the expanded facility next year.

“I think besides the expansion it would bring lots of updated equipment and materials,” said Bernard, a second-year marine biology student, in an e-mail. “I feel like New College is kind of like the bastard child for the state school system and often gets the raw end of the deal, so with the extra money, we could update (and) repair some of the equipment that we have had for years.”

Bernard also explained that more space and resources could resolve such problems as overcrowding in the natural sciences department.

“The marine biology lab has one main lab area with much smaller rooms attached for more one on one studies or theses,” she said. “Last semester, three separate classes were having to use the same laboratory which resulted in some problematic things in terms of people’s material getting misplaced.”

The 23,000-square-foot expansion would aim to resolve issues such as overcrowding by increasing classroom, lab, and office space in the Heiser complex by about 50 percent. The new wing will increase learning space for biological and environmental studies, and also house the new data science program.

“The new wing of Heiser is important because we have many new science faculty members that need classroom and laboratory space. We have two new biologists who will have labs in the new wing, and the third new biologist will occupy a lab vacated by the other two professors,” Katherine Walstrom, an associate professor of biochemistry and the chair of the Natural Science Division, said in an e-mail. “There are also larger laboratory classrooms and labs for future faculty hires in Natural Sciences.”

If approved by Gov. Rick Scott, construction on the new building is expected to start this summer, with a goal to have it completed and occupied by Fall 2017.

“We are still waiting for $1 million more to purchase equipment for the new wing, so the building occupation date is still tentative,” Walstrom said. “We hope that the (Board of Governors) will recommend the last $1 million in funding for next year’s legislative session.”

Some information taken from a shorter variation of this article I originally wrote for the Sarasota Herald-Tribune at politics.heraldtribune.com.

When he delivered his annual “state of the state” address at the beginning of the Florida legislature’s spring session, Gov. Rick Scott vowed to cut taxes by more than one billion dollars as part of his economic plan. By the end of the session, lawmakers decided otherwise, and passed an $82 budget that only included $400 million in cuts, however Scott was confident he would have the final word.

“The process you have is the governor proposes a budget, the legislature passes a budget, and the law gives the governor the opportunity to go through every line in the budget, I will do that just like it’s done by prior years and look at ways where I can save us money,” Scott said at the March 11 closing ceremony.

Despite the loss the annual appropriations bills (HB 5001) represented for Scott, he called it a “good budget” although he would search the bill for wasteful expenses.

“Well it is a good budget, I’m certain the governor is going to do as the governor always does, go back downstairs, wait for the budget to get to them, begin to count through it, develop some guiding principles and make a decision about just what things can be trimmed, and I can tell you, there are a lot of things in this budget that can be trimmed with a clean conscience,” said Senate Appropriations Chairman Tom Lee, Brandon. “We’ve gotten away from funding things where there’s a compelling state interest sometimes, and that happens when there’s extra general revenue.”

Although lawmakers expected Scott to break last year’s veto record of $461 million, on March 17 he vetoed only $256 million in line-items from the state budget on the same day it arrived at his desk.