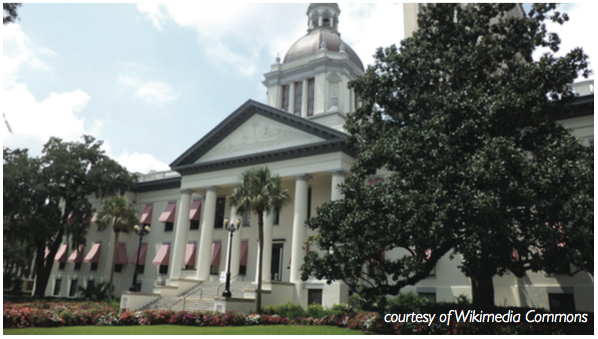 As an interning political correspondent and a member of the Florida Capitol’s Press Corps, I have been able to witness many of the legislature’s policymaking efforts as they happen. Here are a couple highlights from the last few weeks of the spring session.

A bill pending in the House and Senate revisits an old program which permitted individuals to keep found submerged artifacts by reporting their findings, and is currently the subject of an ongoing debate among legislators and the archaeological community.

“This bill addresses the issue of people being charged with felonies for picking up artifacts down in rivers, streams and lakes,” Senator Charles Dean, R-Inverness said at a Feb. 1 committee meeting. “It establishes a permanent program, establishes rules similar to the Isolated Finds program from a decade ago.”

The Isolated Finds Program (1996-2005) ran for nine years and allowed people to keep found submerged artifacts provided they report their findings to the Florida Bureau of Archaeological Research. It was ultimately discontinued due to frequent non-compliance by most diving collectors.

“The program was abused, there were people coming out with five gallon buckets full of arrowheads and claiming that they were found in an isolated find, and therefore had an exemption from the law on discovery of artifacts,” said Rivers Buford, the legislative affairs director for the Department of State when the Isolated Finds Act was in effect.

“We found a massive abuse in the program; the artifacts were turning up on the black market,” Buford said. “Your children, my children, were not having an opportunity to see the artifacts or learn anything about them.”

Like the Isolated Finds Program, the new bill (SB 1054) and its companion legislation (HB803) would issue permits with a $100 fee to the public excavating submerged artifacts. It would also require people to report all findings to the Department of State, and transfer ownership rights from the State to the permit holder.

“Many sites start off as ‘isolated finds’, but with careful investigation and advances in field techniques they can develop into incredibly important archaeological sites,” a statement from the Pensacola Archaeological Society said in opposition of HB 803. “Allowing our shared heritage to be removed an artifact at a time would be like a death by a thousand cuts for many a site.”

When asked for an update on his currently postponed bill, Dean was concerned about its fate and explained that he feels people are confused about the motives of the legislation.

“I’m just trying to protect innocent people that pick up an artifact, as opposed to a fossil, and they get a felony charge, it isn’t right,” Dean said.  “I want to protect the artifacts and I want to protect the fossils, and that’s not a problem, and I really don’t think that innocent citizens, moving in the direction we’re moving right now, should be worried about having that condition.”

The Florida Senate’s Criminal Justice Committee moved a bill forward that would require a unanimous decision to impose the death penalty.

The bill comes after the Supreme Court last month declared Florida’s current method of death sentencing unconstitutional by a vote of eight to one. The court found that “the sixth amendment requires a jury, not a judge, to find each fact necessary to impose a sentence of death.”

Currently, Florida requires simple majority of seven out of 12 jury members to issue the death penalty, and the judge then has the ability to override their decision if certain “aggravating circumstances,” such as prior conviction, are found to exist.

Under current law, only 21 percent of death cases over the past 15 years had unanimous jury verdicts. Staff analysts said that a decline in sentences was likely, but the degree of decline is uncertain since only a vote of seven was required.

A similar bill, HB 7101, is currently pending in the House and sponsored by Rep. Carlos Trujillo, R-Miami. The key difference between HB 7101 and SP 7068 is that the former only requires a majority of nine votes to issue the death penalty.

“If there were to be, according to the subject matter experts, compromise on the unanimity position as it relates to recommendations of death, that would not necessarily insulate Florida from constitutional jeopardy,” said Mark Schlakman, the senior program director of Florida State University’s Center for the Advancement of Human Rights, in support of the Senate bill’s requirement for a unanimous vote.

While public defenders support the Senate’s bill, state prosecutors support the House version since it does not require unanimity.

“I support the death penalty, I’m unapologetic about that,” said Sen. Rob Bradley, R-Fleming, who is also a former state prosecutor. “But I also have the duty to craft laws that will survive constitutional scrutiny from our courts, so if we went to nine to three, we would be in a situation where we had the lowest threshold of any state in the United States for voting to execute somebody.”

The committee, headed by Senator Greg Evers, R-Milton, passed the bill by a vote of five to zero.

When he delivered his annual “state of the state” speech at the beginning of the Florida legislature’s spring session, Governor Scott vowed to cut taxes by more than $1 billion dollars as part of his economic plan. On Feb. 11, the House of Representatives moved forward a bill that would make the cuts a reality.

The tax cut package features elements such as a permanent reduction in the business rent tax, the elimination of the manufacturing equipment tax, property tax reductions for disabled veterans and surviving spouses of veterans, and the renewal of the Back to School tax holiday and the college textbook sales tax exemption.

However, unlike Scott’s proposal, the House plan does not eliminate corporate income taxes on manufacturers and retail businesses, which was a major source of criticism when Scott first gave his speech in January.

“Our tax cut package creates an environment where our business owners can create jobs and expand their businesses, gives parents and students the opportunity to save when they purchase the supplies and books they need, and makes Florida a more affordable state for our brave veterans and their families,” Crisafulli said.