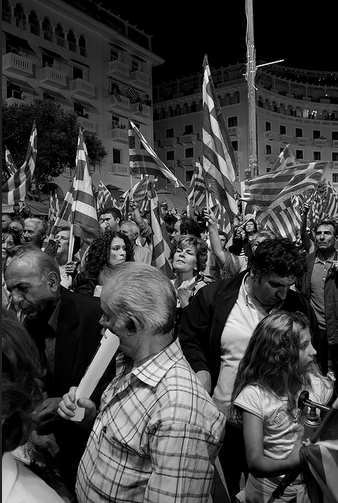 Greek citizens rally together while waving their nation's flag.

As Greece embarks on what it hopes is a new and promising era, recently elected prime minister, Alexis Tsipras prepares himself for a challenging battle.

Prior to his win on Jan. 25, the left-wing Syriza party prime minister promised to renegotiate the terms of the country’s bailout by rejecting the extension. Tsipras addressed parliament on Sunday, explaining that Greece would seek a bridge loan in its road to progression. The prime minister intends to keep his pre-election promises to raise the minimum wage, distribute a pension bonus, rehire public workers and provide free access to food and electricity to those who were victims of the bailout.

“Greece wants to service its loans,” Tsipras said. “The debt is not sustainable. The problem is political. If our partners keep insisting on austerity, the debt will only continue to grow.”

Since 2010, Greece has received 240 billion euros worth of bailout funds. As a trade-off, the International Monetary Fund, European Central Bank and European Commission insisted on austerity measures, meaning strict action would be taken by the government to bring expenses in alignment with the country’s income. These measures include tax increases, a halt on state pensions, a ban on early retirement and significant cuts in government salaries.

In his address to parliament, Tsipras turned the focus to Greece’s humanitarian crises, which he stated were due to “catastrophic austerity.”

According to Anna Kapetaniou, Greek native and a cousin of this article’s author, optimism, a now foreign idea, has once again been restored in the hearts of the Greeks.

“The people of Greece are hoping that Tsipras will change everything,” Kapetaniou said. “Right now, nothing has changed and the market is frozen. We are all just waiting.”

The previous prime minister, Antonis Samaras, said that his “conscience is clear.” Samaras held office through most of the crisis. According to Samaras, Greece is now stable and “slowly walking away from the crisis.”

The program for Greece’s loan distribution is set to end on Feb. 28 as a final amount of 7.2 billion euros is given to the country. However, Tsipras is hoping to find a way in which he can receive a short-term debt while the country decides on a new deal. At the moment, Greek debt has soared to more than 174% of Greece’s economic output, according to BBC.

“He’s promised a lot and is reliant on the EU for help,” O’Farrell said. “Most everyone is skeptical about him.”

United Kingdom native Steve Sathasivam also fears for Greece. “Every economy in the world should be a little worried about it,” Sathasivam said. “It could have pretty big ripple effects if half their debt is written off.”

In regards to Tsipras, Sathasivam believes the new prime minister has given Greece a little too much optimism. “To be honest, it’s too early to pass judgment on [Tsipras],” he said. “But promising a country that is desperately in recession with high unemployment and low wages that he will have half the country’s debt written off is false hope.”