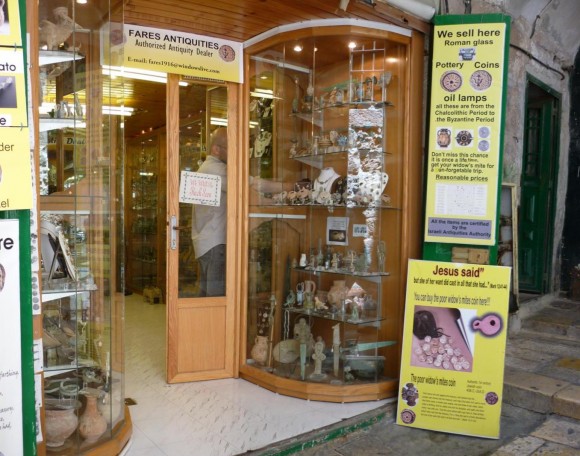 Kersel emphasized that much illegal trade takes place under the guise of protocol in souvenir shops such as this.

Though with not the quite the candor of an Indian Jones movie, the sentiment of “That belongs in a Museum!” certainly ran through Morag Kersel’s presentation. On Tuesday April 12 2011 Kersel presented 2011’s last installment of “New Topics New College” before an audience of roughly 30.  The presentation, “Networks of Plunder: The International Antiquities Trade”, was based on Kersel’s doctoral theses and lined out the ways in which archaeological artifacts are illegally smuggled from the Middle East. Evidenced by the introduction of New College Professor Uzi Baram, a former colleage, noting the benefits of her positive demeanor in the harsh environment of their field work, Kersel has an extensive background in the field of Archaeology. However Kersel’s study is distinctly inter-disciplinary. Dealing with people as well as artifacts, Kersel found it necessary to adopt an anthropological approach to get the data she needed.

Kersel did the majority of her research in Israel where the sale of registered antiquities discovered before 1978 is legal. Sellers work around this system to sell illegal antiquities under the guise of protocol. Kersel suggested that similar networks exist throughout the Middle East and she is continuing to study the surrounding area, particularly Jordan.  Illustrating the scope of the matter, Kersel opened up the presentation with slides detailing the looting of the National Museum of Baghdad during the U.S. invasion and the subsequent appearance of stolen artifacts throughout the world.

The words “Ilegal Antiquities Trade” foster images of cat burglars bypassing museum security, gold amulets, and shady backroom deals.  Kersel’s study focused on the reality of this trade and the vast majority of it is not quite so glamorous. Most illegal trade happens out in the open between souvenir-seeking tourists and locals and is of old pots and coins not treasure chests. Despite the commonness of such things– often locals just pick them up from the desert floor, no excavation necessary—they are effectively priceless to archaeologists. Large and correctly catalogued sample sizes are needed for an archaeologist to make an inference about a given area.  The market for antiquities makes such inferences difficult as looters disturb potential excavation sites and sellers, through the laundering of registration numbers, make it impossible to determine the origins of a given artifact. Kersel outlined  the ways in which a visitor could verify the legality of an artifact souvenir.

Kersel’s presentation seemed particularly suited to the audience. Mostly comprising of Sarasota locals involved in the New College community, many in the crowd had traveled to the areas discussed. After Kersel’s presentation, audience members had the opportunity to ask questions, several of which pertained to personal experience of antiquities trade.