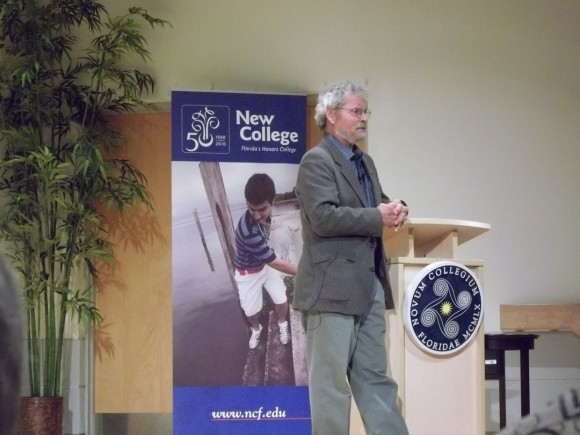 Braasch answers questions from the audience at the end of his presentation.

It was the eruption of Mt. St. Helens in 1980 that marked Gary Braasch’s transition from nature photographer to photojournalist of environmental issues. Braasch, standing at a safe distance, was able to capture photos of the volcano as it broke open into gargantuan plumes of smoke, ash and magma. A short time later, he took a photo of the wasteland and the lone purple flower blooming there, despite some scientists’ beliefs that it would take years for anything to grow back. “The planet, if left to its own devices, can heal itself,” Braasch said.

This was the story Braasch opened with during the Oct. 20 event, “Climate Change through the Camera’s Lens,” held at the Mildred Sainer Pavilion as part of New Topics New College, a series of talks relating to science, the economy and nature. Braasch has been published in Time, LIFE and National Geographic, to name a few. He spoke to the audience about the global effects of climate change while standing in front of a slideshow of his stunning photography.

One photo depicted a snow-white polar bear walking on brown, dry land. “Increasingly in late summer, [the polar bears] are caught on dry land before the ice reforms,” Braasch said. “This has resulted in 30 percent loss of cub survival as measured over the last 50 years of study, attributed to lack of nutrition in the last months of summer.”

In 1979, most the arctic was still frozen in midsummer but now “there’s an area equal to [the size of] a couple of Californias and a Texas of new open water every summer,” Braasch said.

This lack of ice reformation has a major impact for more than just polar bears. Penguins, which Braasch said are “playful and fun to watch,” are very sensitive to the lack of ice in the Southern Ocean because of a loss of shrimp and krill.

According to Braasch, melting glaciers is a problem that is “not regional; it’s planetary, it’s global.” Shorelines that were once protected by ice are now defenseless and villages in the north are left vulnerable to erosion. This also has a negative impact on the culture of the people in those villages, as they are forced to move to new and foreign locations that may not be as beneficial for their traditional hunting techniques.

For those who don’t live close to glaciers, they may simply see the ice recession as a change in the scenery, not realizing that they are losing fresh water for streams and irrigation systems. As part of his project, “World View of Global Warming,” Braasch looks at old pictures of glaciers and then revisits those locations to take new photos and compare the changes. One such case is the Athabasca glacier in Canada, which currently recedes at 7-10 feet per year.

The rapid speed with which the ice is melting also affects sea levels. Florida water has experienced 27 inches of sea level rise and the Stockholm Environment Institute estimates another increase by 20 inches or more by 2060.

“This puts about a tenth of Florida’s population in the red zone,” Braasch stated. “That’s one and a half million people.” Included in this red zone are many important buildings and services, such as hospitals, retirement homes and approximately 74 airports.

“It will be directly affecting many, many people in Florida within a lifetime or two,” Braasch warned. “That’s why we have to be ready now and talk about the way we get energy.”

Temperatures are also rising. “For city dwellers, things are happening with climate as well,” Braasch said. “There are more heat waves in cities now than before.”

The excessive heat is a cause of death from Chicago to Russia. Last summer every state in the U.S., including Hawaii and Alaska, “had one or more cities that broke heat records,” Braasch said. “The nights did not cool off much, so these are record high night temperatures. This is one of the things that kill people. They can’t get any relief.

“The last decade was the warmest decade ever measured,” Braasch added.

The cause of all this? The amount of molecules of carbon dioxide (CO2) in the air, trapping heat coming off the planet and reradiating it. “This is the basic science of global warming,” Braasch said.

Scientists are apparently worried because of the steeper rise in CO2 in recent years, more so than ever before. “It’s very rapid right now,” Braasch commented.

However, there are many ways in which the average person can help. Braasch told the story of a Coral Cables school teacher who, along with her middle school class, made changes around their school such as painting their roofs white, planting trees, and building an outdoor classroom to sit in on nice days in order to limit the use of air conditioning. In just a year, the school saved around $30,000.

Other ways to help include utilizing public transportation and electric vehicles and installing solar panels on rooftops. “Every roof in Florida should have solar panels,” Braasch said. “We have so [many] government subsidies going towards fossil fuels and gasoline and coal; we should have at least as much, if not more, for solar panels to generate energy where we use it.”

50 percent of energy on the planet comes from coal. “We have to figure out how we can change our energy sources and become more sufficient on natural sources that do not use fossil fuels,” Braasch concluded.