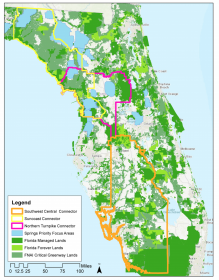 In the face of fierce opposition from environmental groups and citizens in rural areas, Florida is planning a major expansion of its highways with a series of toll roads that would open new parts of the state to development. The Florida Legislature passed a bill last year to expand the Suncoast Parkway north to the Georgia border, extend the Florida Turnpike west and build a new toll road connecting Polk and Collier counties. Construction of the 330 miles of toll roads, termed the Multi-Use Corridors of Regional Economic Significance (M-CORES), could begin as soon as 2022 and is slated for completion no later than 2030.

The roads are the idea of State Senate President Bill Galvano, R-Bradenton, who proposed the development initiative after talking with business leaders about ways to spur growth in the state’s less accessible rural areas.

A public statement from the head of the Florida Department of Transportation Kevin J. Thibault says the department promises to protect the environment while planning for what Thibault calls the state’s “inevitable future growth.” Data from the U.S. Census Bureau indicated that Florida was the nation’s second-fastest growing state in 2019, with an average of 640 people moving to the state every day. Governor Ron DeSantis has expressed that Florida’s growth of more than 300,000 new residents each year demands infrastructure improvements.

The Florida Sierra Club, an organization dedicated to the conservation of nature, has spearheaded a campaign against the project. The Club called the toll expansions “Roads to Ruin” and have released an informational publication by the same name. The organization’s director, Chris Costello, has said the roads would harm undeveloped areas and lead to urban sprawl. The “Roads to Ruin” publication proposes that “road building alone will immediately destroy more than 52,800 acres of undeveloped areas and promote unsustainable sprawl, destroying hundreds of thousands of additional acres.”

The publication also cites concerns about air and water pollution as a result of increased traffic and runoff.

“There is no way to create any one of the three corridors and not have a disastrous impact on Florida taxpayers, water quality, environmental protection and wildlife habitat, including the quality of life for rural Florida,” Costello said.

Some residents of these rural areas, such as Jefferson County in the panhandle, worry that small towns may be left behind as new toll roads bypass their communities or create an influx of new, unwanted growth. New roads are typically proposed by the state Department of Transportation, but these new toll roads were ordered by the state legislature — a top-down process that has left many people distrustful and suspicious. The roads have been backed by organizations such as the Florida Chamber of Commerce, Associated Industries of Florida, the Florida Ports Council and the Florida Trucking Association.

Environmental Health Planner for the Florida Department of Health Ramón Quintero added a locally oriented perspective on the implications of toll road expansion for environmental justice in Sarasota and in the state more broadly.

“This form of development is a national issue, but in Florida the main source of economic development is tourism as a result of this [development] model,” Quintero explained in reference to the motivations for widespread road expansion.

“The subsidies are going to construction companies and it’s a subsidy for the fossil fuel industry, essentially, and for housing developers,” Quintero said.

Quintero explained that throughout the state, demand for road repairs and true multi-modal transportation is highest in existing urban cores, not rural areas. The three toll roads would run through some of Florida’s least populated counties.

“Go to any Florida city and you see that there’s so much room for infill development and to increase density,” Quintero said. “It goes against smart urbanism, mixed use, mixed income planning.”

Thesis student Deric Harvey expressed concerns about the roads’ impact on the “precious habitat of endangered species,” such as the Florida panther, which Harvey said could become extinct due to the disruption of its ability to traverse the little land that the species has left. According to the Florida Sierra Club, the roads would permanently sever connectivity within the Florida Wildlife Corridor and open remaining natural and agricultural areas on which the Florida panther relies to breed and hunt.

Three task forces—one for each road—have until October of 2020 to issue recommendations to the governor and legislature.