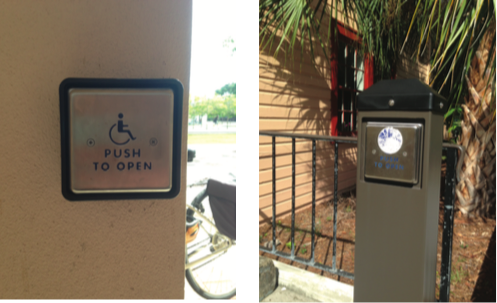 Arlee Boyett, a third-year psychology and religion Area of Concentration (AOC), believes there is much work that needs to be done to make the campus more physically accessible, including “trying to figure out how we can work the overpass to make it less exhausting, fixing the damn elevators, putting more accessible buttons on the doors, because in ACE the doors are really heavy.”

Boyett mentioned that HCL 8, the second floor classrooms of College Hall and certain rooms in ACE are inaccessible to people with physical disabilities. In addition, Bon Seigneur Hall and the Pritzker Marine Biology building are also inaccessible. “There’s a ramp there [at the Marine Biology building] but it’s too steep and the railings are kind of shit,” Boyett stated frankly.

Leen Al-Fatafta, a third-year sociology and gender studies AOC and vice president of the Council of Diversity and Inclusion, also cited the overpass and the elevators on campus as inaccessible features on campus that need work. She believes there should be more American Disabilities Act (ADA) compliant chairs in the classrooms and more educational programs about ableist language on campus and in our everyday lives.

Dr. Fisher noted that New College “has been very good about giving [to the CWC] because of the high demand for [mental health] services.”

The CWC provides individual counseling, group counseling and an online therapist course for students seeking mental health resources. Because of the limited number of counselors, the CWC sometimes has to refer patients to psychologists or psychiatrists off-campus for patients who need long-term counseling. Individual counseling includes bi-weekly, 45-50 minute sessions for a “limited amount of sessions,” according to the CWC’s website. There is a long waiting list at the CWC but Fisher hopes that the brief individual counseling will help to absolve that, because students will only see a counselor a certain number of times and then the next student will come in.

The waiting list is long because the demand for individual counseling at the CWC is very high.

“Usually, on average [colleges] see between five and 10 or maybe 15 percent of a student body,” Fisher stated. “We tend to see more like 40 percent of the student body. Last year it was close to 50 percent.”

“The disability accommodations for students for things like depression and anxiety would not involve regular counseling,” Fisher stated, because most college campuses do not have the resources that would allow that. “We’re not mental health agencies.”

Fisher continued that New College actually has better resources per students than the other schools in the State University System (SUS) for mental health. “The normal ratio of counselor to number of students is one counselor for every 1,500 students. We have four counselors for the 850 New College students, plus the 2,000 or so USF Sarasota-Manatee students.” As of Sept. 21 the CWC had seen 112 students for individual counseling. New College students are currently the primary patients at the CWC for individual counseling.

Dr. Fisher recently submitted a budget request for the Board of Governors meeting that took place at New College Sept. 21 and 22. The money, which would be allocated to all the SUS schools for mental health resources, would allow Fisher to hire an additional psychologist and a case manager.

“I’m very hopeful that we’ll get some money from the state legislature to improve mental health,” Fisher said.

Fisher is also working with thesis student Andrew Blackowiak, the CWC representative, to see if the CWC could be allocated funds to hire a part time counselor. Fisher hopes these monetary requests, if awarded, will help to alleviate the long waiting list that currently has 24 students on it and improve accessibility to mental health resources.

The Accessibility Representative is a new position this year, created by the Council of Diversity and Inclusion (CDI) with the help of the New College Student Alliance (NCSA), as a means to better deal with the issue of accessibility on campus. The accessibility representative will work closely with Meighen Hopton and the NCSA on accessibility problems on campus. They will also attend CDI meetings, as well as Council of Student Life (CSL) meetings and report on issues relating to the student body, which could include sending out surveys or holding educational panels.

The accessibility representative position was, in fact, created by the co-presidents, fourth-years Shelby Statham and Paige Pellaton, and the vice president of Diversity and Inclusion (VPDI), alum Raina Nelson (‘12), last year. However, the position was not confirmed by the speaker of the Towne Meeting so the position never became official, although Boyett was under the impression that Boyett was the new accessibility representative.

“Up until a few weeks ago I thought I had the position,” Boyett said. “I thought the position was official. So last semester I helped out quite a bit with Disabilities Awareness Month, helping out Meighen Hopton, going to CDI meetings, and generally being very vocal about everything.”

Al-Fatafta was recently made aware of the issue at the first CDI meeting of the academic year. “I didn’t know this position existed until last meeting when Arlee talked about it,” Al-Fatafta said. The CDI is reconducting the hiring process and will reappoint whoever gets the position for transparency. Al-Fatafta reported that they are hopeful that in the near future it will be a paid position. Applications for the position will be sent out to students soon.

The accessibility representative will be an added help to Hopton, who just recently hired an intern to alleviate some of her heavy workload.

“We need someone to focus strictly on accessibility issues on campus, because…people feel like a lot of ableist things happen on campus and they do not necessarily get a lot of attention,” Alfatafta said. “So I think having someone whose main responsibility is to report on these issues and to help make campus more accessible is really important.”

In the meantime, Boyett vows to continue to be vocal about accessibility issues on campus.

“There’s that saying the squeaky wheel gets the most oil,” Boyett said. “So when it comes to accessibility stuff I just keep squeaking.”

Yet, Boyett believes that the new co-presidents, third-years Miles Iton and Paul Loriston, are putting in the effort to improve accessibility on campus.

“I have a good feeling we’re going in the right direction. There’s progress being made so we can be hopeful,” Boyett said. “It still is hard though.”