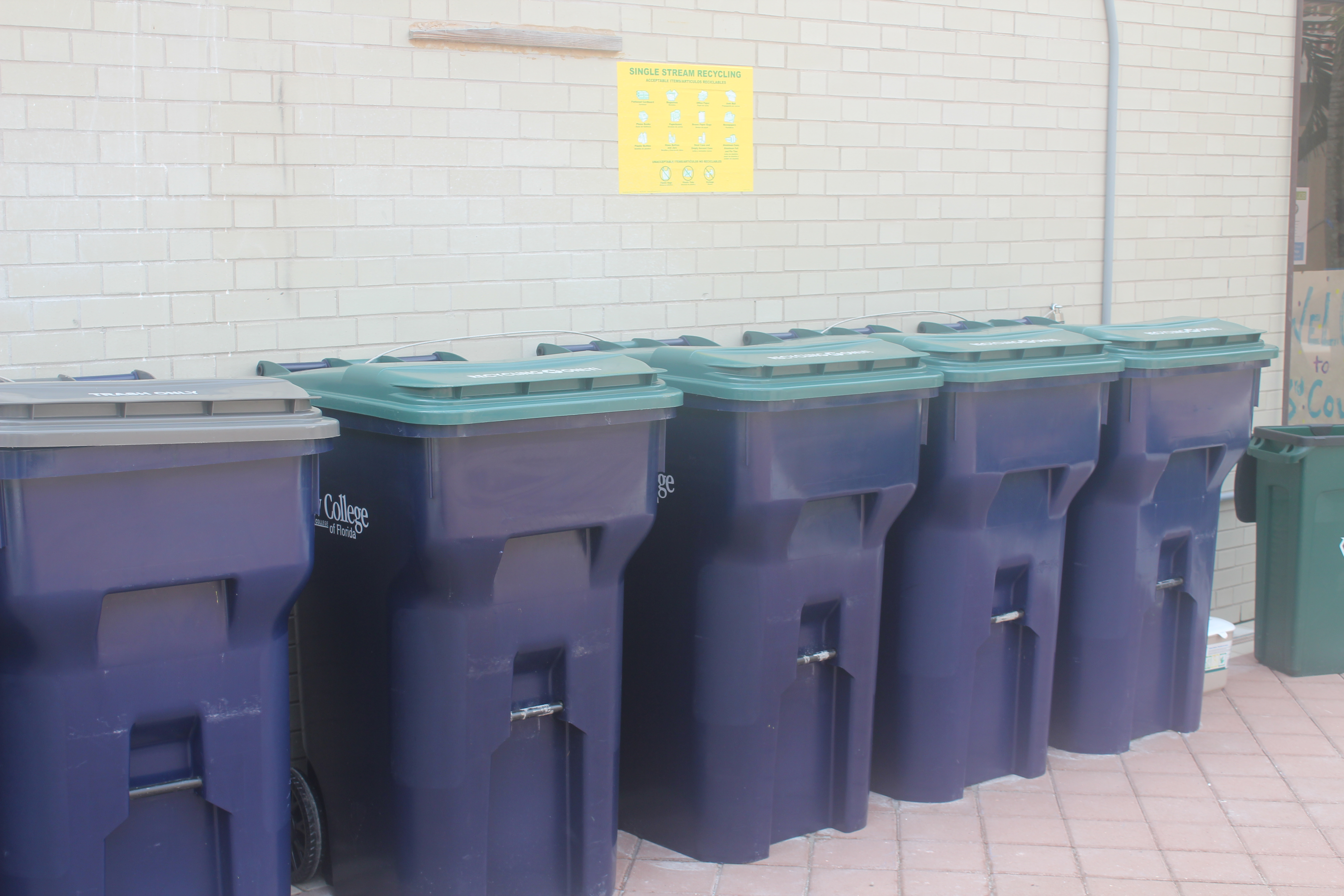 In 2008, the Florida legislature passed a bill which established a 75 percent recycling goal to be met by the year 2020. This year New College began a partnership with Waste Management in order to work towards meeting that goal.

Americans generated over 250 million tons of trash in 2012 alone. On average individuals produce four and a half pounds of garbage per day. Despite estimates that 75 percent of solid waste is recyclable, U.S. citizens recycle at a rate of only 34 percent.

New College is looking to get that percent up, and has already seen improvements  since implementing the streamlined recycling program at the beginning of the semester.

“I would say we’re at a 50-50 split at this point,” Custodial Coordinator Sheila Foley said. Foley helped coordinate the college’s new relationship with Waste Management.

“Students have been doing a great job, they’re using these cans properly, which is so important because if one of the bins gets contaminated then all of that has to be sent to the landfill,” Foley said. “Fortunately waste management hasn’t had to contact us with any of those issues.”

The new trash and recycling containers which were bought for each residence area totaled $7,800. In the end the switch should save the school money because it will be paying less in dumping fees for its garbage.

“I’ll have a better idea about how much we’re saving when we get to December,” Foley said.

Along with saving the school in fees, the new system also saves in labor. Rather than being collected every week day, trash and recycling are now being collected on Mondays, Wednesday and Fridays.

Once the bins are consolidated into larger containers, they are picked up by Waste Management and taken to its recycling facility in Tampa.

Foley, who toured the three story and multimillion-dollar facility, said, “I’ve never seen anything like it, it was amazing.”

Once the recycling has been picked up from New College and taken to Tampa, it is dumped onto the tipping floor of the recycling facility where it is then taken to the sorting belt where garbage and plastic bags are manually removed before it is run through the advanced sorting machinery.

The cardboard is separated out first by star rollers, followed by paper products which are shaken out by weight and then sorted. Plastics are separated by optical automatic sorting of colored plastics. Then any aluminum products are separated from the remaining material by using an eddy current to cause the cans to “jump” across the line. Lastly, the glass is pulverized and the steel is collected by magnets.

The sorted material is then compressed and bundled into blocks to be sold. A block of recycled aluminum cans can be sold for as much as $1,500. Waste Management is the largest recycler in North America and hopes to manage more than 20 million tons of recyclable waste by 2020.

At the moment the streamline recycling program is only in place on the residential side of campus. Physical Plant and Waste Management hope to see it in place on the academic side by next Fall.