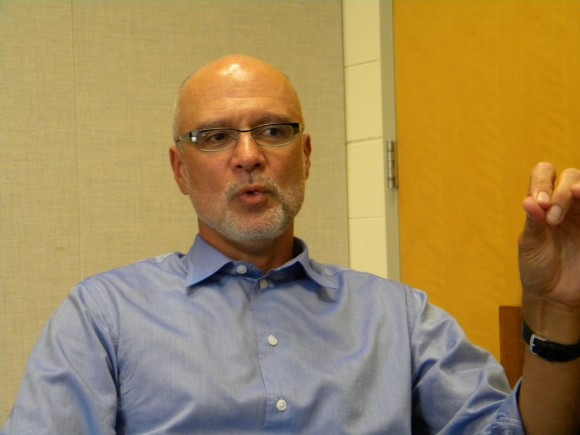 Provost-designate Stephen Miles sat down with the Catalyst to discuss a wide range of issues.

On Sept. 28, the New College community was informed that Professor of Music and director of New Music New College Stephen Miles would serve as the school’s next Provost and Vice President of Academic Affairs starting on July 1, following the retirement of Charlene Callahan. Some of the responsibilities entrusted to the provost include liaising with President Gordon “Mike” Michalson to oversee the academic integrity of New College and lobbying on the school’s behalf before legislators.

“I love this college,” Miles told the Catalyst. “I’ve taught here for 22 years and it has really changed my life. I love the particular system of education that we have here. When I was nominated … I had no idea if President Michalson would choose me, but if I can contribute on that level, I would really want to.”

Miles acknowledged that stepping into the role of provost brings with it a series of challenges. “There’s no question that it’s a challenging position,” he said. “The position is wide-ranging because it’s not only dealing with the educational program and dealing with faculty, but it is also working with other offices on campus, whether it’s Student Affairs or Admissions, and bringing the perspective of the faculty to all of those decisions and trying to make decisions that have the best possible impact on student learning.”

While Miles is currently on assigned research leave for the term, he has stayed in Sarasota during his absence, a factor that he thinks will help him transition into his new role.

“I may be on leave, but I’m not in exile,” Miles quipped with a laugh. “It’s really useful to me that Charlene Callahan has been such an effective provost and one of my goals for the next eight months is to try and soak up as much of her wisdom as I can. It really is a benefit to President Michalson making the decision in October. I feel that one advantage here is that not only will I be able to work with her [Callahan] and with President Michalson, but that I’ll be able to continue conversations that I’ve always had with faculty and be able to start on July 1 to hit the ground running as such.”

Some of the transitioning will involve working with officials from various state offices with oversight over New College and the other public universities in Florida. “I don’t think there will need to be as long a period of getting used to the position — it will require some getting used to, I’m sure of that, but to the extent that we can use this transitional period to facilitate learning the position, meeting some of the people in the Board of Governors and the SUS [State University System] offices to get a full sense of the people I as provost will be interacting with,” Miles noted.

As first reported by the Catalyst in September, one plan originally floated by Provost Callahan was to reorganize the campus’ academic departments into more streamlined units. While Miles is unsure if the plan will go forward as originally presented, he wants to encourage more faculty discussion to make sure that the best course of action is taken.

“I’m interested first of all in the faculty having a conversation,” Miles explained. “I think that’s extremely important. How can we have fuller participation by all faculty in the decision-making process? How can we communicate with each other more effectively? I think those are the questions that we’re going to be addressing and the merits of her particular proposal will be determined only through that kind of discussion.”

When asked where New College can improve, Miles said that there was work to be done with respect to campus diversity. “There’s no question that we would be better as an institution, that we would offer a stronger educational experience, that we would prepare students for life if we had a broader, more diverse student body and faculty,” he stated. “I think that while we tend to think of it primarily in terms of race, gender and sexual orientation, it is also a much broader issue. How open is our community to difference on the level of political positions? Religious practice? Even just personal preference — someone who dresses more formally than someone else? Do we look at difference as the opportunity to get something that’s not just ourselves or do we see it as something that has to be marginalized? I want us to have a culture of recognition at New College, where everyone feels that they are treated with respect, that they can ask for what they need and for what they want and be taken seriously and that their special contribution is recognized and valued by the community. If we could have a community where everyone experiences that, I think we would be a healthier community.”

Miles also advocated for greater integration with the Sarasota community, arguing that it can enrich the lives of both students and citizens alike and provide for greater avenues to raise New College’s profile. “We have a system here, or a way of approaching education, that is life-changing,” he explained. “That’s a strong term to use, but I really believe it. We have a minimum of structure and, I suppose in the minds of some, may seem kind of loose, but when people understand how having a minimal structure allows for creativity without sacrificing rigor, they want to send their sons and daughters to it.”