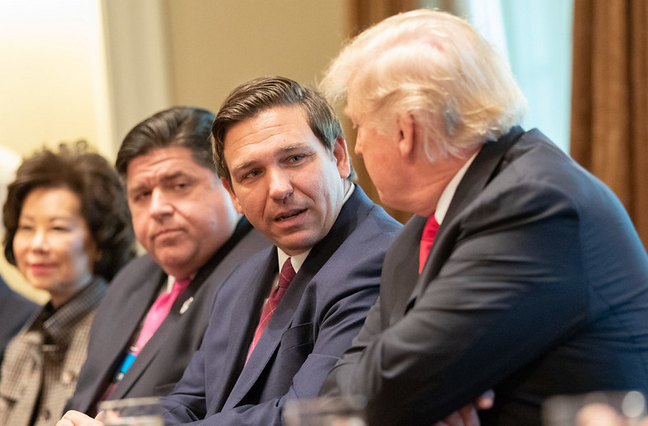 For Former President Donald Trump, history looks like it’s going to repeat itself.

On Nov. 15, he announced his third consecutive run for the Presidency, hoping to overturn his Democratic usurper, President Joseph Biden. Much the same as his 2016 run, though, in front of him stands a Florida Governor eyeing the President’s seat. And while Ron DeSantis might pose more of a threat than Jeb Bush did, the question remains—can the former reality TV star defeat his opponents in the Republican presidential primaries?

For the most part, the field of meaningful contenders for the Republican nomination has already narrowed down to the two of them. No other Republican politicians have made any effort to indicate a serious bid for the presidency, and it doesn’t take a political scientist to tell that these two are currently easily the race’s biggest frontrunners.

The polls on both of them are curious, and seem to indicate a growing lead on the part of DeSantis—or at least a narrowing of the distance. While polls from 2020 onward all indicated a double-digit lead on the part of Trump in a Republican primary, frequently to the tune of a 40% lead against any possible challengers, but that has been changing slowly but surely, culminating in the post-midterm polls. Where Trump was originally seen as a shoe-in, many polls are putting DeSantis slightly ahead of the former President, polling marginally worse with his base but pulling in many, many more moderates and “Republican-aligned” voters. The question now is why?

By all accounts, the midterms were a disaster for the MAGA school of thought. Trump had endorsed about 195 candidates prior to the election, and while upwards of 90% of Trump-backed candidates made it through their primaries, their general election results varied drastically. About a third of the former President’s endorsements went towards races that were at least nominally competitive, and his successes there were much more limited. Of the 29 candidates who had supported the former President’s claims about the election being stolen, 28 of them did not win their general election.

To many Republicans, this is indicative of a growing issue with Trump. His oftentimes-amorphous politics seem increasingly unpopular—not with their Republican base, but moderate and swing voters that Republicans need to actually win elections. For some, as the Trump-brand of MAGA Republicans seem to dwindle in popularity, the former President’s one-time heir-apparent, Sen. Ron DeSantis, looks like an appealing candidate.

Many party elites, media officials and similar Republican figures seem to be flocking to DeSantis as well, who has made several thinly veiled jabs at the former President. Powerful kingmakers in the sphere of GOP donors such as Ken Griffin have broken from Trump, endorsing and funding DeSantis’s obvious presidential aspirations instead. DeSantis, however, has still not yet announced his candidacy, and some worry that DeSantis’s base is, fundamentally, Trump’s base.

The argument for Trump is a bit more simple, but no less compelling. The former President still polls better than DeSantis. New polls as the midterms have started to slowly fade from the minds of voters still put the former President handily ahead of DeSantis, to the tune of 30% over DeSantis in a Republican primary. There’s no doubt that this race could narrow as the months go on and donors flock to Trump, but in the wake of the midterms, it seems like the midterms might be less of an existential threat and more of a bump in the road.

Crucially, there is an overwhelming sense of chaos in the Republican party. While nobody can agree what, exactly, they need to do to fix it, most Republicans are looking at their relative under-performance and getting nervous about the 2024 election. Now, many within the party seem to be looking to DeSantis to rejuvenate and remobilize the ideological base that Trump built, but the voters are, for now, sticking to the former president.