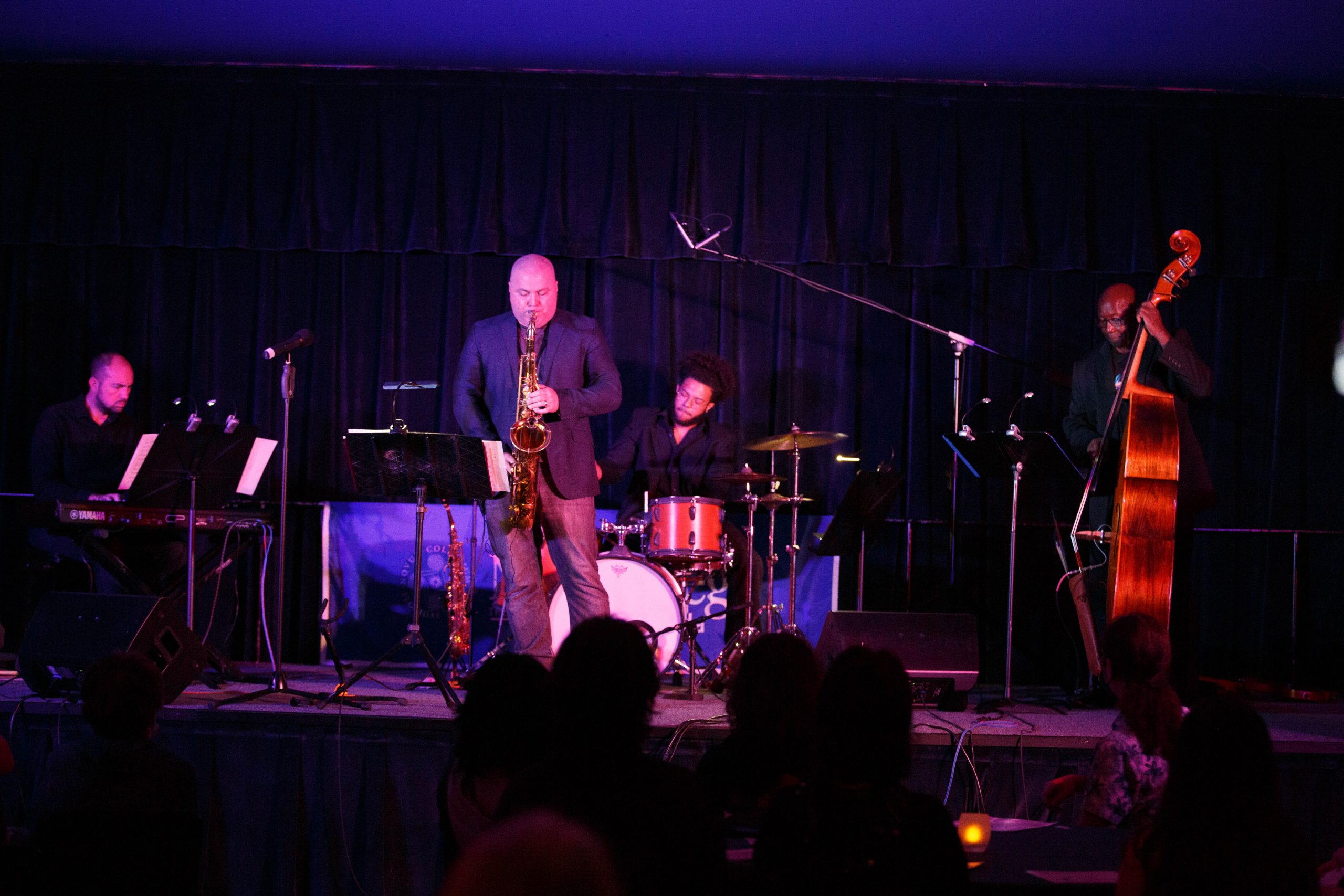 The Pete Carney quartet playing in the radically-transformed Sudakoff Conference Center, decorated to give the feel of a jazz club. Photo courtesy of Nancy Nassiff.

“All new music, all the time.” This is the thesis of the New Music New College (NMNC) program, currently helmed by Assistant Professor of Digital Media and Music Mark Dancigers. Though the pandemic did poke a hole in the motto last year, no time is being wasted in providing students with the opportunity to listen to talented artists perform this year. The 22-year-old program has strived to invite musicians of various genres and disciplines to play live, as well as engage in conversation with the event’s attendees. These conversations focus on creative practice, with the artists being encouraged to discuss their respective process of writing original music and rehearsing their craft.

The first event of the year was the groovy Pete Carney Quartet, a contemporary group specializing in acid jazz—a genre which combines elements of funk and soul. The band consists of frontman and saxophonist Pete Carney, pianist John O’Leary, bassist Hiram Hazley and drummer Henley Connor.

“We were excited to welcome the quartet,” Dancigers said. “I thought it would be great to start the season by featuring music that heavily featured improvisation and communication onstage.”

The group made their campus debut in the Sudakoff Conference Center on the evening of Sept. 13. They showed off the wide range of their sound by playing multiple original compositions, including a blues arrangement and their own mesmerizing rendition of Radiohead’s classic tune Paranoid Android. The quartet put on quite the show, according to various attendees of the event.

“I think the band put on a great show,” second-year Ben Becker said. “The solos were all amazing. Getting to see experienced musicians all play together like that was so cool.”

“I always enjoy the performers New Music New College brings in, but this one was especially great,” thesis student Emma Solloway said. “It was really neat to see the way the combo blended contemporary, traditional and modern elements of jazz and transformed Sudakoff into somewhat of a jazz club.”

Following the performance, Dancigers highlighted one of the primary themes of the event with a question to the four musicians about their respective creative practices. Event goers were just as responsive to this portion of the night as they were to the music.

“The way Pete Carney talked about music was very interesting,” Becker recalled. “It was inspiring to get to see him play the way he did and talk about the mentality he had to get there.”

Dancigers was happy to know that students enjoyed the concert, as well as the message he intended to deliver.

“We were really glad to see that we had a pretty good turnout of students and community members,” Dancigers remarked. “And so excited to see the lively chat that happened just after the concert.”

Moving forward, NMNC has announced the program’s full slated schedule for both the fall and spring, encompassing performers from across the country in addition to local artists.

“The theme for the fall season is local artists,” Dancigers mentioned. “Sarasota is an amazing town for music, which we’ve been fortunate to be a part of. We want to highlight and celebrate people innovating in music that are right here in town.”

The theme aligns with NMNC’s roots, since the program first got its start when Professor Emeritus of Music Stephen Miles arranged a collaborative concert with the Ringling Museum that featured music from avant-garde composer John Cage. After the initial event, Miles saw that there was an audience in Sarasota that was interested in new and contemporary music. Subsequently, the series grew to include projects from students, as well as national artists, maintaining a balance between the two.

Despite live music being the main attraction, throughout the years NMNC has always been about more than just the show.

“I would be really excited if the students and event goers walked away feeling encouraged to be creative and make music,” Dancigers said. “Specifically, one of the things that emerges when you talk to musicians is that everybody has to practice. There is a magic that happens onstage, but that magic is a result of a daily devotion to music.”

The Sept. 13 concert was the first of the four planned NMNC fall shows, with the next event coming on Oct. 8. The next salon will take place at the Mildred Sainer Pavilion, and it will feature a duo consisting of Principal Second Violin of the Sarasota Orchestra Samantha Bennett and Principal Percussionist of the Dallas Symphony Orchestra George Nickson. The event will be free to students and $10 for visitors.