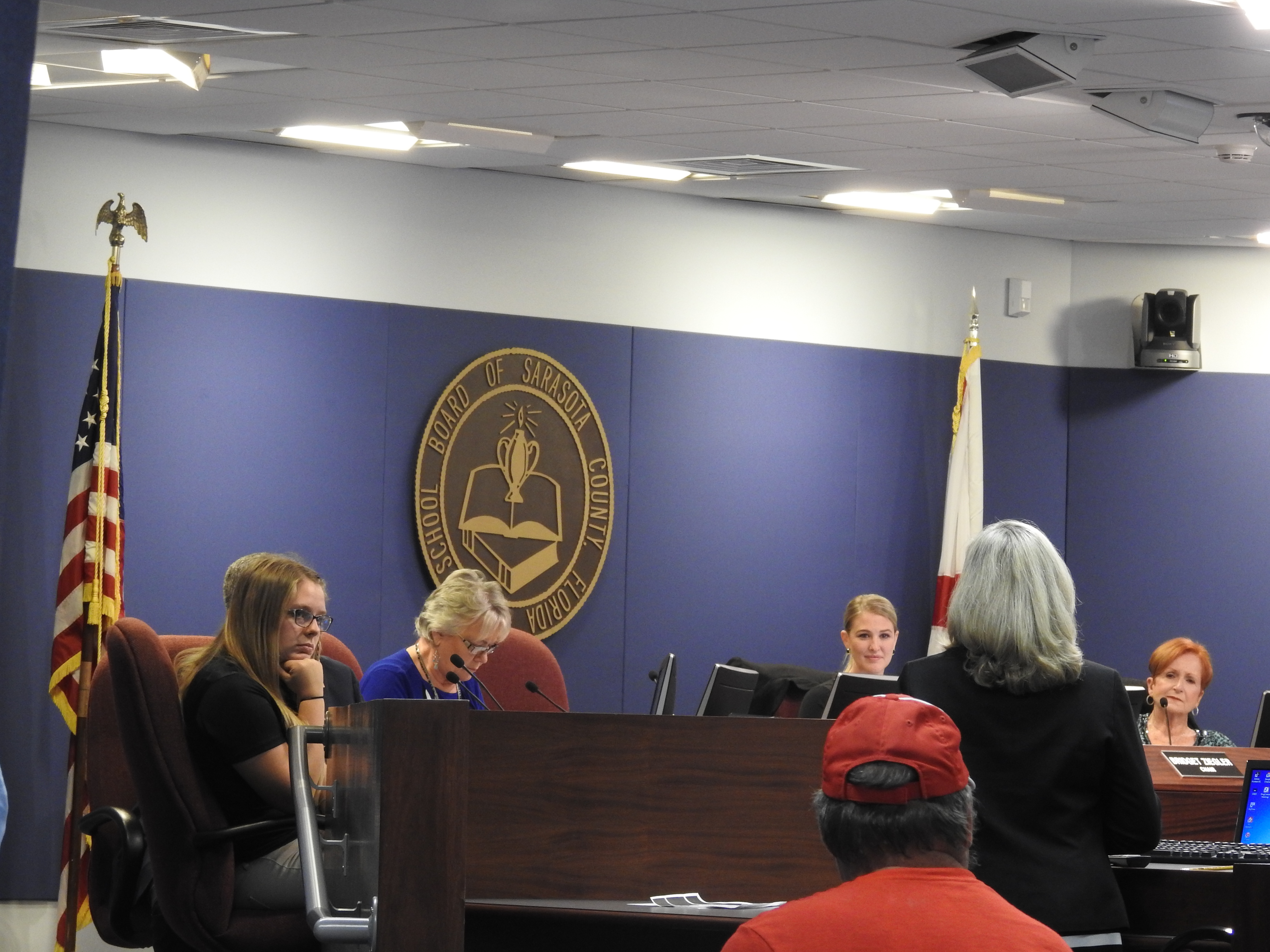 Eileen Calub/Catalyst The Sarasota County School Board listens to the concerns of one of many parents in attendance.

Taking an unprecedented step toward improving LGBTQIA+ inclusion in local schools, the Sarasota County School Board released new guidelines in late October to advise teachers and school staff on gender and sexuality-related issues. On Tuesday, Nov. 6, these guidelines sparked a heated debate at a Sarasota County School Board meeting packed with over 100 attendees. The discussions ran late into the evening as passionate supporters and opponents of the guidelines approached the podium.

The Gender Diverse Student Guidelines, developed by an LGBTQIA+ task force and approved by the majority of school board members, lay out policies regarding restroom and locker room usage and overnight field trips for gender non-conforming students. At each school, there will be at least one universal or all-gender single-stall restroom. Students may use whichever restroom matches their gender identity. Moreover, students may also be addressed by their preferred name and pronouns at school, as well as identify by their chosen gender without parent input and regardless of official records.

The guidelines have drawn controversy and criticism from many concerned parents and community members. Notably, Board Chair Bridget Ziegler felt surprised by the announcement of the guidelines, stating that there had been no public discussion on the matter. Furthermore, Ziegler was alarmed that parents would not be informed if a student told a teacher that they were transgender. Thus, Ziegler called for a motion to alter the gender guidelines, specifically so that parental consent would be required for a student to identify as a gender different from the one they were assigned at birth.

Parents and grandparents, some accompanied by their children and grandchildren, flocked to the conference room where the meeting was held and quickly filled the seats, eager to address the issue at hand. Dozens of attendees stood along the walls to spectate the contentious debate. With 59 people signed up to speak, each person was given a limit of three minutes to address the board.

Several supporters of Ziegler rose to voice their concerns about the new guidelines and thank the chairwoman for publicizing the issue, many stating that they felt their parental rights were being violated by the school district.

“Parents are looking out for their kids and they have a right to be involved,” Kyle Hembree, the father of two students in the Sarasota County School system, said. “You should not exclude them because you decide their point of view is unsafe.” Several members of the audience, prohibited from clapping, waved their hands in the air to show agreement.

“It appears that the only people informed are the ones pushing for these issues to be passed through,” Robert Becker, the father of a current student and a graduate of Sarasota County Schools, said. Becker also stressed that while he receives plenty of automated calls regarding announcements for school events, emergency warnings and his child’s tardiness or absences, “not once” did he receive a call regarding the new gender guidelines.

“This is not about LGBT rights,” parent and former City Commission candidate Martin Hyde said. “It’s about parental rights, which are more important to our future generations than the sensibilities of a few ultra-liberals in our school system.” Hyde further criticized the guidelines as “governmental overreach.”

While some parents cited statistics, scientific studies and statutes to back their case, other speakers unabashedly expressed their personal sentiments regarding transgender people. Some speakers characterized transgender individuals as “gender-confused,” “impersonating the opposite sex” or simply “lying.”

Moreover, while certain speakers attacked the guidelines from a religious standpoint, the pastor of a Presbyterian church in Venice recognized the gender guidelines as a “sensitive issue” and hoped the board would “invite dialogue with parents and churches.”

Despite the parental outcry, Superintendent Todd Bowden stood firmly in support of the guidelines. Bowden emphasized that students would ideally come out with the support of their family, yet not all students have that opportunity. Therefore, schools must honor a student’s decision not to disclose their gender identity with their family and provide a “safe place” for students to be themselves.

“It is up to the student and the student alone to share his, her or their identity,” Bowden said in his opening statement. “You do not need permission from your parents, or anyone else, to be lesbian, gay, bisexual, transgender, questioning, intersex or asexual.”

Many parents also spoke out in favor of the guidelines, citing personal stories and statistics.

“I thank you from the bottom of my soul for keeping my son safe and allowing him equity in school,” Vanessa Nichols, the mother of a transgender fourth-grader, said. “Providing trans kids with equal rights doesn’t mean any less rights for non-trans students. It simply means that you’ve lowered their likelihood of emotional distress, self-harm and suicidal ideations and increased their chance of acceptance and being able to learn in a healthy environment, which is why we’re all here.” Nichols added that “58 percent of trans kids take their lives when their families do not accept them.” The proud mother spoke of how much happier and well-adjusted her child became after simply changing his name and pronouns.

Representatives of ALSO Youth, a Sarasota non-profit that provides services to LGBTQIA+ young adults, also spoke. “My fifteen-year-old self thanks you,” one member commented after sharing an anecdote about their difficulties coming out when they were a teenager.

The new guidelines owe their origins in part to a 2016 case which drew attention to policies on gender identity in the school district. Nate Quinn, a transgender student and senior at Pine View School, was prohibited from using the men’s restroom after several requests. Thus, despite his discomfort, Quinn was forced to continue to use the women’s restroom.

“It was very uncomfortable for me and all of the second grade girls in there,” Quinn told the Huffington Post in 2016. “I didn’t need that happening every time I would go to the bathroom.”

In response, Quinn challenged the school to change its decision by organizing a “call-in” protest, drawing on the support of alumni and fellow students to deluge the school’s phone lines. Due to the overwhelming response, Pine View administration decided to reverse its decision, granting Quinn access to the men’s restroom and rewriting its restroom policy altogether. Community members have since urged school board members to establish comprehensive gender-inclusive policies in the district.

Quinn’s first push to recognize the rights of gender non-conforming students in Sarasota schools was not in vain. After hours of citizen testimonies, the Chair’s motion for reconsideration of the gender guidelines failed. Thus, the district decided to uphold the original set of guidelines. These guidelines are available for viewing on the Sarasota County School District’s website, listed under “Creating Safe Schools for All Students: Gender Diverse Student Guidelines.”

“If you are a student, I say this: I see you. You exist,” Bowden declared, concluding his report. “This district, while I am superintendent, will respect the rights of and serve the unique needs of every student, every day, whatever it takes.”

Information for this article was gathered from huffingtonpost.com, heraldtribune.com and .wfla.com.