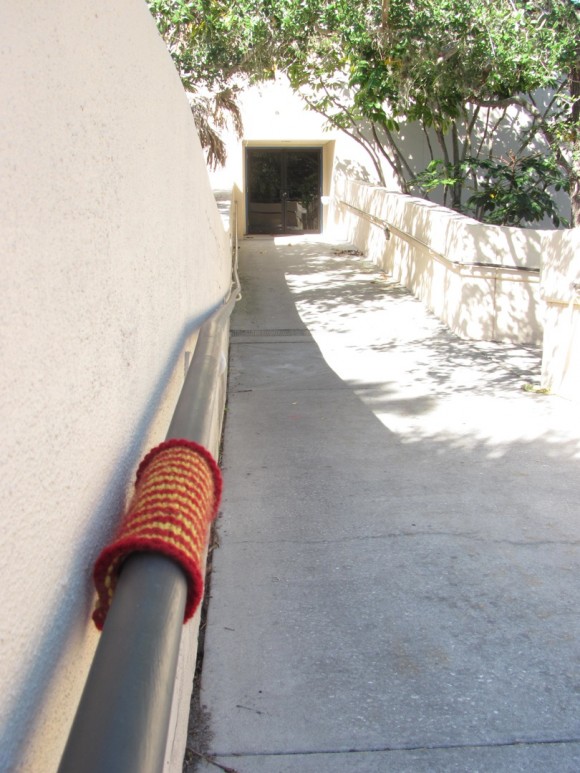 Sporting Gryffindor colors, this yarn cozy is one of four works of knit graffiti left by the “Midnight Knitter” which can be found along the overpass on New College’s campus.

Over the past few weeks, passersby paused to examine the handiwork of the mysterious bandit known as the “Midnight Knitter” who adorned the handrails across the campus overpass with several multi-colored works of yarn. The anonymous figure, or figures, behind the acts are participating in the increasingly popular worldwide practice of “knit graffiti.”

Knit graffiti, also termed “yarn bombing,” is a developing type of graffiti or street art in which colorful knitted cloth is displayed in public after being sewn around various objects such as lamp posts, street signs, trees or other things. Knit graffiti came into view of national media when in 2005, an anonymous group of knitters based in Houston banded together to start the notorious knitting gang “Knittaplease.” Knittaplease specializes in so-called “knitting vandalism” by “tagging,” or decorating with yarn, public property and essentially wreaking joyful havoc upon cities in a not-so-harmful way. With names like P-Knitty, The Knotorious N.I.T., MascuKnitity and Granny SQ, Knittaplease incorporates a hip-hop influenced terminology that gives the group an edge to back up the sharpness of their needles.

“It’s cool seeing knitting in this kind of bad-ass way,” first-year and experienced knitter Zoë Curlee-Strauss said. “Knitting is traditionally this stuffy thing that your grandma does.”

A modern artistic and cultural movement however, is changing the stigma surrounding knitting as a formal or “stuffy” craft. In an act of protest against the Danish involvement in the war in Iraq, citizens in Copenhagen, Denmark covered an entire combat tank which was used in World War II, in knitted and crocheted squares of pink yarn. Some modern artists, such as Theresa Honeywell and Nathan Vincent, specialize in knit and crochet pieces that include, but are not limited to, full-bodied motorcycle cozies, crocheted urinals and lion heads made of yarn with taxidermy inserts. The knitting movement pervades a multitude of countries as well as a good amount of states in the U.S. such as Curlee-Strauss’s hometown in Fayetteville, Ark.

“It’s graffiti I guess, but it’s not permanent,” she said. “They do it [yarn bombing] in Fayetteville and they give the swatches to animal shelters and turn them into dog beds and stuff.”

Currently, the Midnight Knitter has placed four knitted sleeves on various sections of the handrails leading to and around the New College overpass. The swatches, as some students point out, are actually made with the colors of the four houses of the wizarding school of Hogwarts from the Harry Potter series. There’s a yarn sleeve for the red and gold of Gryffindor, the green and silver of Slytherin, the yellow and black of Hufflepuff and the blue and bronze of Ravenclaw. This knitting ninja of New College certainly add a personal touch to their craftwork. The identity or identities of the unknown person or persons behind it all has yet to be revealed however, many would bet on some prime suspects being in New College’s very own knitting club, the Anarchy Death Sticks. Although they were not together for the first half of the semester, the Anarchy Death Sticks plans to regroup right after fall break. Many students show interest in the craft and many also hold strong opinions on the subject of the graffiti.

A blue hand-knit swatch sewn to a tree trunk marked the outside of the dorm room of first-year and knitting enthusiast Josie Evans. As she worked her needles around bright yellow yarn, Evans told the Catalyst her thoughts on the knitting ‘vandalism’.

“It’s a statement of beauty—it’s like art in place,” Evans said. “Some graffiti can be really ugly… whereas knitting graffiti is harmless and beautiful.”

When asked why she thought people chose knitting of all things, she replied, “I think it’s people wanting to revert back to something really simplistic. [It’s] just a good craft you can do with your hands…. I was inspired by the ones that I saw on the overpass to make some of my own,” Evans explained as she worked on a fresh swatch.

“It just brightens up your day…It shows that people care about beautifying the space and that they put time and effort into it.’”

This article contains information from the following sources: