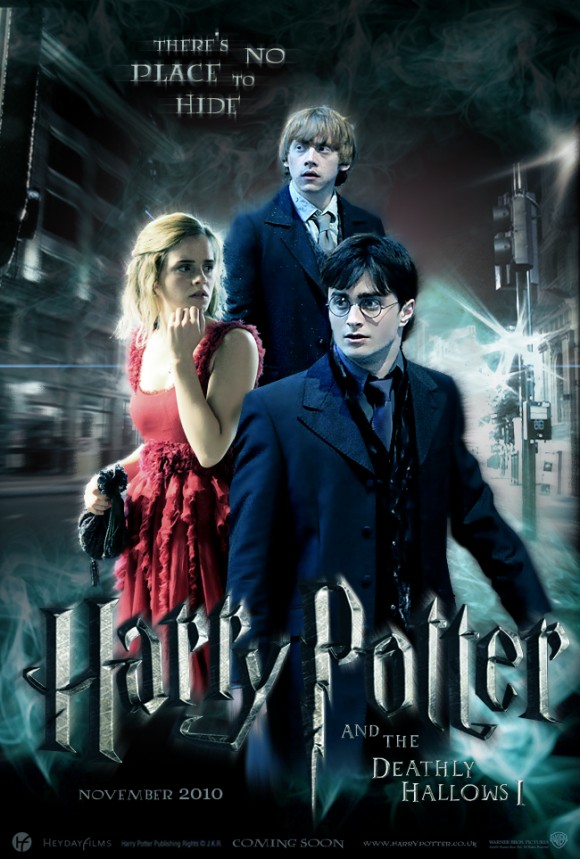 During its first weekend in theaters, Deathly Hollows: Part One grossed approximately $125 million.

From the very beginning, Harry Potter and the Deathly Hallows: Part 1 (released on Nov. 19) is tense and dark. Horrifying images thrust the audience into the heart of evil: early on, viewers see the Muggle Studies professor (Carolyn Pickles) suspended in the air, mouth agape, a dead look on her face as Voldemort murders her. I immediately felt the isolation of Harry (Daniel Radcliffe), Ron (Rupert Grint) and Hermione (Emma Watson), each pictured alone in their houses when we first encounter them, later wandering random places together like delinquent runaways. There are no adults to protect them as they venture out to find and destroy Horcruxes, the objects in which Voldemort has stored bits of his soul.

Directed by David Yates, the first installment of the final chapter in the film series is best seen by those who have read the books: the scenes changed faster than a boggart in front of a large crowd and the plot was not driven so much as forced as though Yates tore images from the book and flung them on the screen. At two and half hours long, I expected the film to endow the audience with an understanding of the heroic trio’s mission, but the connecting details are lost. Unexplained flashbacks and journeys into Voldemort’s mind add to the confusion.

It is certainly the scariest film of the series, but like the others, lighthearted moments remind us that our characters are only teenagers, full of awkward and volatile emotions. Sexual tension is offset by humor, but things get heated in Ron’s vision of Harry and Hermione sucking face violently, silver bodied and naked, though the good parts are hidden with special effects and purposeful limb placement.

Moviegoers see the scope of evil particularly at the Ministry of Magic. A lifeless group of workers magics anti-Muggle and pro-pureblood pamphlets together. Uniformed ministry troops swarm after Harry, Ron and Hermione amidst a flurry of posters showing Harry’s face that read “Undesirable No.1.” Snatchers looking like punks and thugs search the streets for mixed blood witches and wizards. There’s a price on Harry’s head and the whole corrupted Ministry is after him.

Transitions between scenes are sometimes stunning. The basilisk Nagini swallows the audience; as Harry, Ron and Hermione disapperate, Their bodies twist into thin black swirls that turn into the trees at their new location. Out of place but delightfully artistic, the “Tale of the Three Brothers” (a fairy tale in a book left to Hermione in Dumbledore’s will) is conveyed in animation, with spindly figures reminiscent of Tim Burton’s animated films.

As usual with the other films in the series, many details were amiss, most of them forgivable. The Dursleys leave Privet Drive of their own accord without the cordial exchange between Harry and Dudley that was in the book, an important part to have left out considering Harry’s history with his adoptive family. Some scenes are added, as when Harry, watching a distraught Hermione with visible affection, extends his hand to her and they dance and laugh albeit Ron’s desertion. The strong bond between Harry and Hermione is evident on camera. Watson’s performance is notably better than in any of the other films. Her acting is more subtle and no longer over-dramatic. Bellatrix Lestrange (Helena Bonham Carter, who as usual gives an amazing performance as a crazed devotee of Voldemort) tortures Hermione, who lets out scream after excruciating scream.

Twice I came very close to crying, first when Harry visits his parents grave and again when Dobby the house elf, who came to the trio’s rescue, dies in Harry’s arms, telling Harry how happy he is to be with him. The film ends on a note as foreboding as its beginning — Voldemort breaks Dumbledore’s tomb open and steals the Elder Wand, a wand that always defeats its challenger in a duel. Cackling, he shoots lightning into the sky and then everything goes black.

If you didn’t read the book, you’ll likely get lost in the film. I had dragged my mother along and the parts she was awake for moved too slowly for her liking. Her detailed film synopsis: “The bad guys are trying to kill Harry and his friends are trying to save him.” If you have read the books, you may begrudge not ever gaining access to Harry’s thoughts and emotions. Still, the appropriate tone and the more exciting scenes create drama, and while little is well explained, the film mostly follows the book.