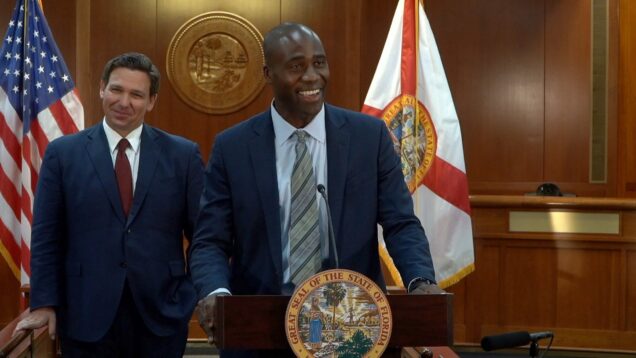 Republican Gov. Ron DeSantis has found a replacement for Dr. Scott Rivkees—whose contract as Florida Surgeon General recently expired—in Dr. Joseph Ladapo, a proponent of hydroxychloroquine and ivermectin, and an opponent of masks, vaccine mandates and lockdowns. As Florida Surgeon General, Ladapo will have primary control over the Florida Department of Health (DOH), and thus the Department’s response to the COVID-19 pandemic.

According to Kim Krisberg, writing for The Nation’s Health, a monthly publication of the American Public Health Association, only four U.S. states have a post for a surgeon general. The state to have one the longest, Pennsylvania, has not had it long: just 25 years. The structure and responsibilities of this position vary between the few states that have a surgeon general, and their efficacy has not been reliably demonstrated.

“Research on the benefits and effectiveness of state surgeon general posts and how to best structure those positions is limited, which could be one reason so few states have one,” Krisberg wrote.

The primary role of the State Surgeon General position is, as specified in the Florida DOH Statement of Agency Organization and Operation, to act as the“chief administrator, managing the day-to-day operations of the Department.”

While there is a council, the stated authority of the State Surgeon General within the DOH is vague and their discretion thus vast and authoritative, but some of their more relevant responsibilities include: “Being the state’s leading advocate for wellness and disease prevention in Florida; Performing all administrative activities required to direct, supervise and carry out the day-to-day duties of the Department as authorized by law or by the Governor and Cabinet acting as the head of the agency; Conducting planning and budgeting activities; Entering contracts and other agreements as authorized by law; Carrying out rulemaking and formal hearing responsibilities; Designating an official to accept service of process on behalf of the Department.”

The authority and jurisdiction of the State Surgeon General are subordinate to that of the Florida DOH, and so understanding the former requires understanding the latter. Per section 20.43, Florida Statutes, the DOH is functionally responsible for surveilling diseases and health conditions in the state, accumulating statistics and other data to inform the public and implementing “intervention that prevent or limit the impact or spread of diseases and health conditions.”

The manner in which the DOH shall accomplish this is through its seven divisions: Administration, Emergency Preparedness and Community Support, Disease Control and Health Protection, Community Health Promotion, Children’s Medical Services, Public Health Statistics and Performance Management and Medical Quality Assurance. All of these divisions report to one of three people, each of them appointed by the State Surgeon General.

It is self-evident that the Florida DOH has taken on increased responsibility and importance as Florida continues to confront the unprecedented coronavirus pandemic. The political dimensions of the pandemic are especially unprecedented and—given political dimensions are not studied by epidemiologists—challenging. Medical advice must go through the absurd, divisive machine of American politics before it might be implemented as policy. This lends itself to a struggle between politicians and medical experts when the two disagree. The party with the leverage in this conflict in Florida is the politicians, demonstrated by the power of the Governor to appoint and remove the State Surgeon General at his discretion.

The choice of DeSantis, who has tended to voice support for approaches to the COVID-19 pandemic incongruent with the medical consensus, to replace outgoing Surgeon General Rivkees with Ladapo is hardly unsurprising.

Ladapo, according to the Boston Globe, graduated from both Harvard Medical School and the university’s Graduate School of Arts and Sciences with a Ph.D. in Health Policy in 2008. According to the governor’s press release on his appointment of Ladapo, he was recently granted a professorship at the University of Florida (UF) College of Medicine. Prior to that, he was an Associate Professor at the David Geffen School of Medicine at the University of California, Los Angeles (UCLA), where he cared for hospitalized patients. He also served as a faculty member in the Department of Population Health at the New York University (NYU) School of Medicine and as a Staff Fellow at the U.S. Food and Drug Administration.

However, Ladapo has moved away from the pages of academic journals and into the opinion columns of the Wall Street Journal, a right-leaning newspaper, as well as a few others since the pandemic began. He has pumped out thirteen articles, some titles of which include: “Are Covid Vaccines Riskier Than Advertised?” and “The ‘Universal Vaccination’ Chimera.” The first articles that Ladapo wrote about COVID-19 were “Coronavirus pandemic: We were caught unprepared. It is too late for shutdowns to save us” and “Lockdowns Won’t Stop the Spread.” These were published on Mar. 24 and Apr. 9, 2020, respectively.

Ladapo’s first piece has held up particularly well, saying that “as soon as restrictions are lifted, the virus will once again tear through our communities with abandon, until one day (hopefully) we have an effective vaccine. To contain a virus with shutdowns, you must either go big—which is what China did—or you don’t go at all. In this country, we hold liberty too dearly to go big; eventually, citizens will push back—hard.”

However, when one reads through the lines, it is clear that Ladapo is not being honest. He says that shutdowns are pointless because hospitals will be overwhelmed whether they are implemented or not. Ladapo’s alternative solution is to build more ICU beds and begin making COVID-19 tests. However, Ladapo knew that this was not a timely enough response. His disingenuous fatalism continues:

“At this point, no matter what we do, we tragically will lose many Americans. Short of a miracle treatment, it’s too late for any other outcome. However, our economy, people’s jobs and livelihoods, and the education of our children should not become collateral damage.”

Since Ladapo’s first article, studies have shown that restrictive shutdowns, while effective, were not significantly more effective than less restrictive forms of non-pharmaceutical intervention. One Washington Post article from June 8, 2020 says that this study shows that “shutdowns prevented 60 million coronavirus infections in the U.S.” The study does not show that, and the word shutdown is never used. The study says that, “In the absence of policy actions, we estimate that early infections of COVID-19 exhibit exponential growth rates of approximately 38% per day. We find that anti-contagion policies have significantly slowed this growth.” That is to say that the study assesses the effectiveness of all anti-contagion policies, not just shutdowns. In a sense, this supports Ladapo’s assessment that the media has been misrepresenting facts. But in another, the study still shows that the measures implemented, which did include shutdowns, were majorly successful.

Some of the research that he has done since the pandemic began has been in the form of a meta-analysis on the effectiveness of hydroxychloroquine in treating COVID-19, an idea pushed extensively by former president Donald Trump, despite little scientific backing for its efficacy. Ladapo’s research, however, despite him citing it in an opinion piece he wrote for the New York Daily News, has yet to be published in a peer-reviewed journal.

Throughout the pandemic, Ladapo has been consistently supportive of republican narratives of the virus. In his first opinion piece, he wrote that “the only potential savior that would prevent this scenario [unending devastation due to the virus] is an effective vaccine.” But since then, he has moved toward undermining the efficacy of the vaccine, writing a piece titled “Are COVID vaccines riskier than advertised?,” in which he does not cite any studies. Instead, he references a petition by a group of scientists asking the U.S. Food and Drug Association (FDA) to refrain from approving any COVID-19 vaccine, which includes the sentence, “Our petition doesn’t argue that risks outweigh benefits—or that benefits outweigh risks. Rather, we focus on methods and processes, outlining the many remaining unknowns about safety and effectiveness—and suggest the kinds of studies needed to address the open questions.” This is supremely ironic, given that in another article, titled “Too Much Caution Is Killing Covid Patients,” Ladapo argues that an obsession with “certainty” concerning the safety of using drugs like fluvoxamine, ivermectin and hydroxychloroquine in early treatment of COVID-19 is killing patients.

In “An American Epidemic of ‘Covid Mania,’” he argues that too much focus has been given to COVID-19 and not other problems.

“Don’t put one illness above all other problems in society, a condition known as ‘Covid mania,’” Lapado writes.

COVID-19 was the third-highest leading cause of death in 2020, behind only heart disease and cancer. Ladapo goes on to say that “it also has a low mortality rate among most people and especially the young—estimated at 0.01% for people under 40—and therefore never posed a serious threat to social and economic institutions.”

Why he was hired

Rivkees, the previous Florida Surgeon General, was appointed by DeSantis in Apr., 2019. Prior to that, he was a highly accomplished physician, working as chair of the department of pediatrics at the UF College of Medicine. According to News 6, “The Florida Department of Health paid the University of Florida $280,000 for Rivkees’s services as part of a two-year contract that expired June 20.” However, according to Press Secretary Christina Pushaw, Rivkees’ contract ended in September and could not be legally extended further.

It seems that DeSantis didn’t look far, picking again from the staff at the UF College of Medicine, before he found Ladapo. Unlike Rivkees, who was generally quiet during the pandemic, Ladapo is a vocal proponent of many fringe approaches to tackling COVID-19. More importantly, though, Ladapo has been a sycophant for republican narratives, not once writing an article in opposition to conservative messages since at least Nov. 2016 when he wrote a politically centrist article which blamed both ends of the political spectrum for hate, including Trump. However, since then, he has been quiet regarding Trump’s actions.

DeSantis, as many Florida news outlets have argued, might have been motivated to appoint Ladapo by this loyalty to conservative politics, which has been reaffirmed by his first action as Surgeon General—signing off on a Department of Health Rule change that effectively nullifies mask mandate lawsuits filed by several school districts, according to WFSU.    How the DOH combats the virus, which will likely never be eradicated and may continue to infect people for several years, is now almost entirely in the hands of Ladapo. Due to his treatment-first, prevention-second approach, it’s unlikely that his tenure will see an uptick in Florida’s rate of vaccination.