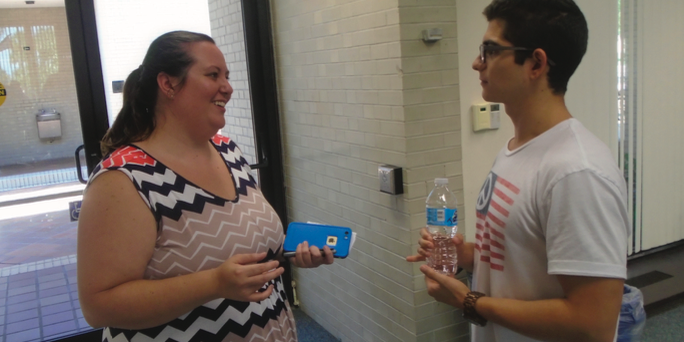 The new year has brought many changes for administration, including a notably retooled and successful orientation headed by Student Affairs’ newest member. As the new director of first-year programs, Jess Maxon has made it her mission to make sure first-year students get the most out of not just their first years, but their entire time here.

During Maxon’s own time in undergrad at Juniata College she studied chemistry before going on to earn a graduate degree in nonprofit management, with a particular interest in student affairs. After school, she served with the public service group AmeriCorps, where she focused on youth in an underprivileged community and had a mentor who encouraged her to pursue her interest of working with undergraduate students.

She went on to become a project manager for community engagement and social entrepreneurship, and later returned to Juniata to become the director of community service and eventually the director of student activities, before finally joining Student Affairs at New College.

“I had my eye on New College for a while,” Maxon said. “New College is of particular interest to me because of its rankings in terms of four-year liberal arts public institutions, but also because of its interest in social justice, I felt like I could fit in here.”

Maxon’s first experience on campus was on the Day of Dialogue, when she interviewed for her position.

“[It] was a really great experience because it gave me the opportunity to just, really meet with students on your level,” Maxon said. “From that moment on I was hooked and anxiously awaiting a phone call, so now, here I am.”

Maxon acknowledges the importance of learning about the viewpoints of students in regards to life on campus.

“When students stop into my office and they talk to me, they are very real conversations, they are offering advice from the perspective of students, they are offering really good feedback to grow the program,” Maxon said. “You as students understand what you want and you need to succeed, and so when you stop in and you tell me those things, that’s my favorite part of this job.”

In terms of New College in general, Maxon praised the passion and empathy exhibited by the average student. She said she feels both “at home and comfortable” with the general community.

Maxon also took time to share a few of her plans for the upcoming year, including an update of the school website for first-year programs, which will be a “comprehensive resource list.” Along with Special Projects Assistant Corey Culbertson, she will also be putting together the upcoming Family Weekend, where students will be able to invite their family members to experience the campus with them. She will also continue to work with Orientation Leaders and oversee orientation in the coming years.

She shares four main goals for these and other plans going forward.

“I have learning objectives for the year, and that’s that first-year students feel more confident, they understand resources that are on campus and available to them, that they begin thinking about their career path and the path that they have for the rest of their life, and building resiliency through teamwork,” Maxon said. “Building community, building relationships, really making you, first-year students, the best that you can be.”

Maxon went on to explain the importance of emphasizing these learning objectives for helping the first-years make an easy transition to the next phase of their lives.

“One of the things that I stressed to the Orientation Leaders was that when first-year students step on this campus, their identity has officially shifted from high-school student or high school graduate to college student,” Maxon said.

“It is so important to provide the resources necessary to transition into that identity, but also to make sure that you’re successful with that identity, because in four years you’re going to be shifting to college graduate and I need to make sure that through first-year programs that you had a successful transition when you came into college so that when you’re transitioning out of college, you’re successful…because that’s what student affairs is, setting you up for success.”