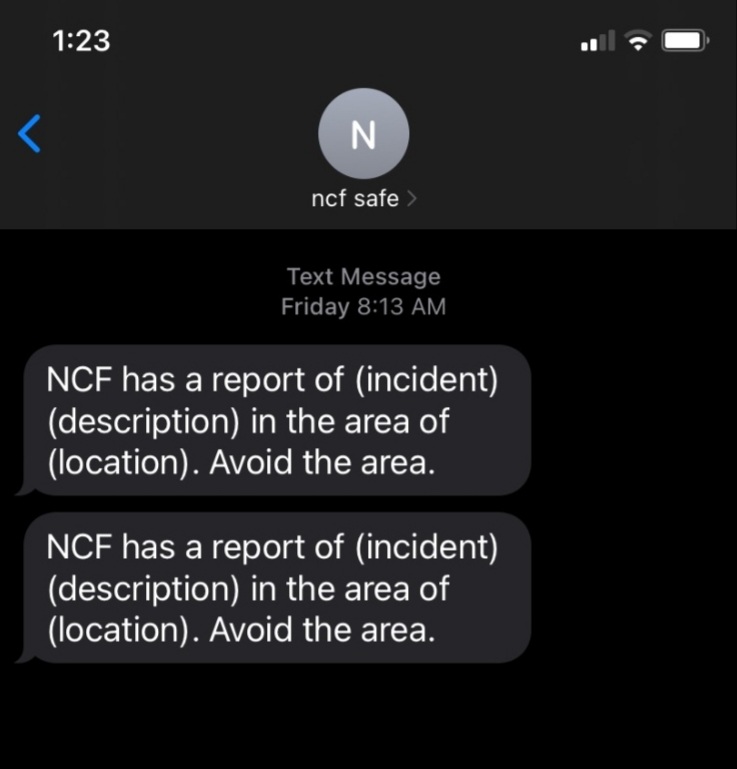 A series of vague and confusing texts were sent to students at approximately 8:13 a.m. on Feb. 4, meant to alert them of an armed individual on campus.

On Feb. 4, at 8:13 a.m., an emergency notification was sent to the student body, including text messages, phone calls and emails, warning students of “an incident” on campus and to avoid an unspecified area. The message varied depending on the method of communication that was used to reach the student. On text and email, the message read as follows: “NCF has a report of (incident) (description) in the area of (location). Avoid the area.”

These text and email alerts were sent prematurely and did not contain all of the necessary information a student would need to stay safe in an emergency situation. The phone calls and voicemails left to students were more informative.

The transcript of the voicemail stated, “At 7:25 a.m., campus police received a call regarding a suspicious armed person wearing a long coat carrying a shotgun in the area of General Spaatz Blvd. Officers responded immediately and conducted a sweep of the area with negative results. Local law enforcement also provided assistance.”

Students received a follow-up message approximately 32 minutes later, at 8:45 a.m. This one was an “all clear” message: “This is the NCFSafe Emergency Notification System. The emergency threat has passed.”

In the hours following the incident, student concern grew and grew for a variety of reasons. Principally, the lack of information given to students was seen as very worrisome by many, which was voiced publicly by a number of students on the college’s forum.

“I woke up after the alerts had already passed, and I wasn’t entirely sure what to do,” first-year Chloe Rusek shared. “I just felt uninformed and uncertain.”

Keeping students safe on a college campus is quite the task; even if New College is smaller than the majority of other public state universities. The Campus Police Department (CPD) and administrators alike dedicate large amounts of time to ensure that the methods the College has in place are effective in maintaining a safe and secure campus. An example of one of these methods is the NCFSafe Emergency Notification System. According to Interim Police Chief Kathleen Vacca, the system has been in place at New College for about five years now. The system was implemented in order to protect students in case of any potential campus-wide emergency incidents, including natural disasters and reports of suspicious persons.

Students’ primary concerns regarding the incident included: finding out the actual source for the notification, worrying if New College would be prepared for an actual emergency and questioning how to receive emergency notifications on their phones and not their emails. These concerns were addressed in an interview held with Vacca and Associate Vice President of Administrative Affairs Christie Fitz-Patrick on Feb. 9.

“A call comes in, someone calling and giving information about something that seems ominous,” Vacca explained, speaking on the process of how an emergency notification gets sent to the student body.  “Then, the dispatcher/police communication operator gets that information and dispatches an officer or officers, if there are more than one available. Those officers respond to the scene, assess the situation and attempt to substantiate the caller’s information. There are radio transmissions back and forth on where the incident is happening. At this time, the dispatcher is still on the phone with the caller, where additional questions are asked regarding the suspicious person.”

“The next step is to alert the next person in the chain of command, in this case an available sergeant,” Vacca continued. “The next level would be to inform the on-call administrator or the [police] chief. The next step is to alert the Associate Vice President, who in turn informs the President. Additionally, the dispatch protocol is also to inform the Vice President of Student Affairs, who takes care of notifying their own chain of command. It’s kind of a bit of a phone tag in terms of how information comes out.”

The complicated process Vacca describes isn’t just difficult when relaying information, but also in making sure the process gets carried out effectively and correctly.

“Currently, unlike bigger agencies, we have one person who is receiving the emergency information and simultaneously serving as the dispatcher. The job also includes looking at campus cameras in order to substantiate the caller’s claims. It’s quite the multi-tasking operation,” said Vacca.

Furthermore, once the process reaches the point of actually sending out the notification, there are still more hurdles to evade.

“The notification system that we use has templates for certain scenarios that may occur. It is then the dispatcher’s job to fill in the template with the appropriate information for the situation,” told Vacca.

When simply taking a look at an overview of the process, it can be easy to see how miscommunication and errors can occur. Yet, looking specifically at the system’s mishap on Feb. 4, more obstacles made the process even harder for the CPD and administration.

“I believe the characterization of the incident as a failure of the system is correct,” stated Vacca. “We received a call from someone saying that they spotted someone on campus wearing a trench coat and holding a long gun. The suspicious person in question ended up being a New College employee, wearing personal clothes due to cold weather. In the lighting at that time, the caller confused what was a leaf blower or a trash picker with a long gun. Within two minutes of the call, we had an officer responding to the scene. It took some time to identify the suspicious person, but with the help of the caller, we got it done.”

“I was called about the report on a day off,” Vacca went on to say. “The Vice President of Finance Affairs and I decided on a message, which was the phone message. The dispatcher/police communications operator was in charge of using the system to send out the text and email messages. The dispatcher read and followed the system’s training manual, which did not work because it was full of outdated information. Our dispatch training supervisor did also resign before Christmas, so our people did the best they could. I can’t personally fault the individuals at work. They followed the script and the script was inaccurate.”

“We have reached out to the parent company of the system, BlackBoard Direct, to make sure we could have training on the newest version of the system and the most updated information on the system as possible,” Fitz-Patrick added, speaking on the future of New College’s relationship with the NCFSafe Emergency System.

The Feb. 4 incident was a result of a worried student doing their best to try to protect their community, and the CPD and administration assisting using all the tools at their disposal. The lack of employees at the CPD and outdated training information on the emergency system turned an already confusing situation into a much messier one.

“Despite the situation being a false alarm, the caller in question was doing what they thought was right,” Vacca said. “It was not a gun, but I’d rather have someone call if they thought they’d seen a gun than not out of fear of being wrong. We [the CPD] need more people, we have openings in multiple positions. Two law enforcement positions are open, two police communications operator positions and a community and safety aide position.”

“Students have to actively agree to provide contact information for emergency notifications,” Fitz-Patrick commented, addressing the student concerns of not receiving the text or phone messages. “As we speak today, students have to go into NEW Cleis, where there is a link to register your phone number to receive these messages. That personal information is protected from public record and request.”

Looking at the future of the College’s use of the NCFSafe Emergency Notification System, Vacca and Fitz-Patrick are both confident in the CPD’s ability to improve knowledge of how to handle such a situation.

“I think it’s important that people know that the police department is here to keep people safe,” Vacca said. “It wasn’t our best moment, but someone called with a legitimate concern, and the police did respond immediately.”

“We’re trying to be transparent with the situation that occurred,’ Fitz-Patrick said. “We do have new management, where Chief Vacca has been stepping into the role of Interim Chief very well. In the coming weeks, we’re hoping to do a bit more relationship building between the CPD and the student body.”

On Mar. 12, there will be a CPD open house in the Hamilton “Ham” Center, where there will be officers available for any student questions or concerns. Additionally, the CPD will be holding its annual self-defense class at the New College fitness center on Apr. 12.