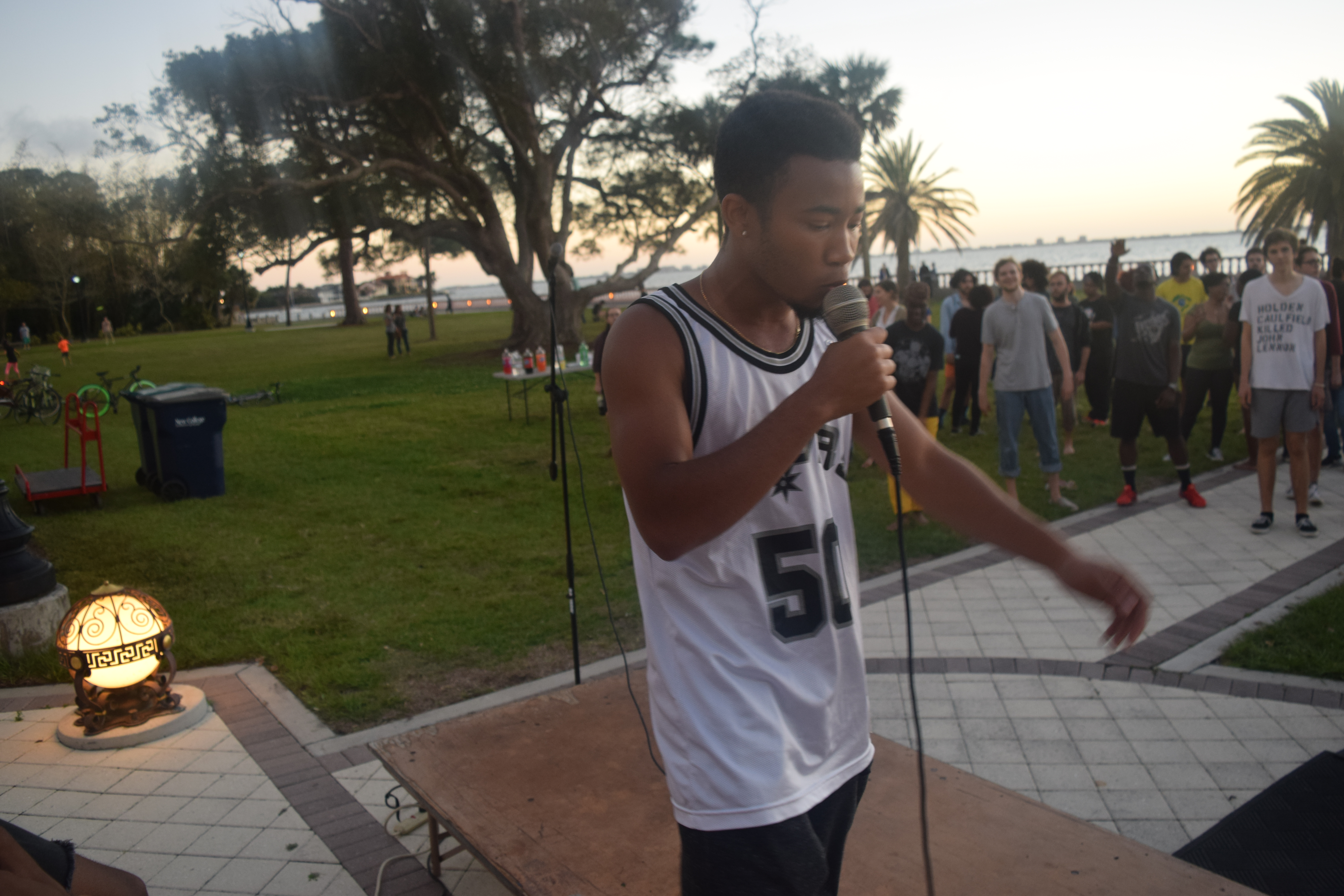 Hip-hop may have been declared the most popular music genre of 2017 by Billboard, but its popularity in certain circles still surprises many listeners and onlookers. New College of Florida, a close-knit liberal arts institution with a majority White student population, might appear to be one of those unlikely fan bases at first glance. In the spirit of ecstatic wonder, however, the Novo Collegians of today have shown an affinity for beats, rhymes and life unlike anything the campus has bumped to before.

“I’m still tripping that [sic] this is the new New College,” Mike Rothbaum (‘94) said after witnessing back to back hip-hop sets at the recently held Time Travel Palm Court Party (PCP) last February. Rothbaum was one of many former students present at the event thanks to the concurrent alumni reunion held by the New College Foundation. “Back in my day [hip-hop on campus] was a few white kids covering Public Enemy,”  Rothbaum said. Indeed, New College has come a long way from its tie-dye, acid rock image most in the city tend to associate the student body with.

To date, rappers account for over 75 percent of the musical guests invited to play student events on campus this year. Artists from areas as close as Tampa and as far as Georgia and New York have put New College on the map in the Florida rap/hip-hop scene. It’s become a favorite venue for members of the local Sarasota act YC Collective. Consisting of emcees Kervin “Swerv the Hooligan” Etienne, Travis “Pseudo Ra” Walton and Travian “Tre Godfella” Davis, YC Collective has made somewhat of a home base out of the eager #TruBlu crowd.

“I play there at least every three months or so,” Walton said. “I’ve met a lot of talented individuals through New College too. I’ve yet to work with any, but [there’s] definitely a couple I have in mind.”

This could be thanks to the influx of Miami admits who organize performance events with their hometown favorites in mind. Such is the case with south Dade County conglomerate SoFlo Records, a loose membership between several up and coming artists from the east coast. Prominent emcee Johnathan “JAB” Ab, for one, had never been to Sarasota before receiving the call to rock last semester’s Hip-Hop Bike Shoppe show organized by third-year student Anya Contreras-Garcia and second-year transfer student Myles Rodriguez.

“I first heard about New College from Anya [when she was] doing a DJ set for New Radio, New College on WSLR,”  Ab said. “She put me on.”

The show was a runaway success, and SoFlo found similar triumph in their own set at Time Travel PCP. Thanks to these experiences, SoFlo has even booked a future show at the Old Skool Bar & Grill scheduled for Apr. 20.

“I don’t even perform over there as often as I’d like, to be honest,” Ab continued. “I’d love to perform in y’alls [sic] city more.”

Of course, it is an easily understandable feeling from JAB since New College has hosted its fair share of regional superstars. Former members of the Denzel Curry & Raider Klan affiliated group C4, Stephen “SdotBraddy” Braddy and Josh “Yoshi” Thompkins also made their own waves in the area thanks to New College bookings. Braddy headlined the Black History Month Planning Committee 2017 Concert sur la Bay, while Thompkins played a rousing set at the Freestyle/Floetry/Fuckery Palm Court Party last Fall.

“It was fun, but I was also learning a lot of things from different students,”  Thompkins recalled. “I plan on [coming back] when I drop. My [next] album gonna be crazy!” Thompkins has since released his latest album, Black Jesus, on all major streaming platforms.

Additional favorites include Dawyen Sekajipo, an acoustic hip-hop/neo-soul act based in both Miami, Florida and Los Angeles, California. Born and raised in Liberia, West Africa, Sekajipo’s brand of woke litness has been a staple of the New College Black History Month Series for the past three years. He’s headlined a staggering three shows for the program in the past, and even stopped by to shut it down at the aforementioned Freestyle/Floetry/F*ckery PCP. Thanks to his frequent bookings in Tampa, Sekajipo has become a guaranteed crowd pleaser.

“The New College crowd has always been welcoming and embraced my live performances,” Sekajipo said. “The past Black History Month Ecstatic Wonder Festival has definitely been my favorite of all visits. The African drummers are long time friends of mine and it was dope to be able to share the stage with them–they really blew me away. It was bittersweet seeing this will be the last of the original [BHM] class.”

To call Black History Month or any other recent programming the genesis of the New College rap scene would be presumptuous. New College does have a previous history of its students uniquely engaging with rap music. Some of this history, however, begs the question of how sincere the efforts were. There’s been a recorded history of walls and other events seemingly thrown in the name of hip-hop that drew the ire of some Novos. These include the infamous “Pimps and Hoes Wall” of the late aughts, a thinly veiled blackface masquerade, and “DA WALK 2 DEATHROW [sic]”, a spring 2016 wall thrown during the January interterm that featured “purple drank” and other party favors deemed stereotypical. Both walls were thrown by White students.

As New College expands and diversifies its student body, however, its reach for artists has begun to expand beyond consumption. Some of the Miami artists playing at New College are students themselves. This includes third-year student Zachary Schoenblatt, who performs under the monikers “Prettyleaf” and/or “aloeboy”.

“I started in doing music in middle school there,” Schoenblatt said. “Since then I’ve most recently played Freestyle PCP. I just dropped an album recently too, assert yr humanity, on my SoundCloud.” Schoenblatt’s music can be found on the SoundCloud website labeled under the artist “Prettyleaf.”

With this novel breed of uniquely brilliant interests in the Novo Collegians of today, hip-hop has unquestionably taken over as the campus’s preferred turn-up soundtrack. The Freestyle + Floetry Tutorial sponsored by Carl Shaw every fall semester will continue to develop future talent as well. One previous student of the course, the aforementioned Myles Rodriguez, has been performing for years as Myles Optimystic and continues to aid both the course and the Sarasota scene through collaborations.

“‘[I connected with] mostly Pseudo Ra,” Rodriguez said. “We are planning on working together soon.”

Since then, students of both past and present have contributed to New College’s hip-hop catalog. Examples include the group n.e.Bodied Entertainment, a local collective of past and present students of the Freestyle + Floetry Tutorial, and Portals, the official YouTube account of alum Heath Hawkins (‘15) that has since gone viral after the release of the parody track “Kickass.”  The rap game at New College only has the potential to grow even further, and maybe even grant the college its first successful hip-hop alum in the future.

Until then, it’s up to New College to keep the scene bumping and the guests rolling. It should not be too difficult a task, they will have plenty of help from the artists themselves: Braddy has been known to pop up at a Palm Court Party every now and again, the SoFlo gang will be back for their “4/20” show at Old Skool Bar & Grille, Sekajipo and Thompkins both plan on returning for album releases and the YC Collective has most recently connected with several students for a hip-hop showcase titled One Night Only this past Mar. 17. Thanks to the foundations being laid by this generation of Novos and friends, the cypher shall continue.