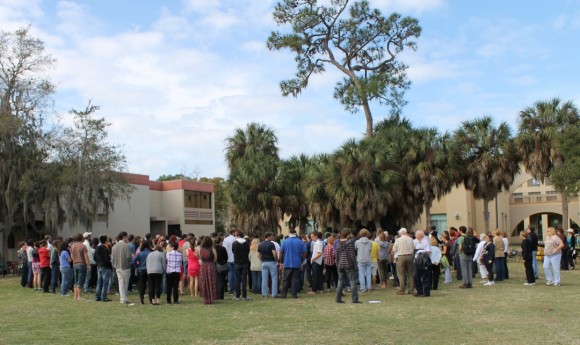 Students gather on Z Green during the teach-in.

Students aligned with social justice groups on campus, Residency Advisors and the New College Student Alliance (NCSA) organized the teach-in just ten days before it came to fruition on Feb. 14. They were mobilized into action when they found out that a student had hung a Confederate flag from his dorm. Student organizer and thesis student Claire Comiskey said that this incident wasn’t what the teach-in was about, but that it was “the straw that broke the camel’s back.”

“Last year, we started having some serious instances related to race,” Associate Professor of Sociology Sarah Hernandez said. “My theory has been that we go in three-to-four year cycles where we have incidents and we address them and things die down … This time around, however, it has been consistent. Last spring [there were] some issues, in the fall [there were] issues and then this semester there have been more. Last fall, the staff contacted me and told me that issues were happening with the [student] Forum and some of the faculty pushed for a statement calling for civility.

“Then we finally had some small workshops with various faculty who volunteered to moderate those workshops and then this time around the students were really fed up,” she continued. “They were feeling that this was not being taken seriously and they really wanted to push the issue and say that this is a serious matter. They wanted to take a much more aggressive posturing by shutting down classes. We are moving away from public statement. With faculty we always make public statements on discrimination and that we are for diversity and civility … But, I think this event was moving us to the next step in saying that statements are not enough and that we need to take action.”

The roughly 250 in attendance participated in small group and large group discussions. The small groups were moderated by facilitators briefed by Southern Poverty Law facilitator Lecia Brooks while the large group was facilitated by Brooks herself. In the large group, students voiced through a microphone instances of discrimination that they have experienced at New College. “I felt that when [thesis student] Destiny [Lyals] came up and talked she expressed herself so sincerely and showed her emotions that kind of opened the door for this conversation to be one of sincere expression and openness,” organizer and thesis student Felix Acuna said. “I feel that after she went up a lot of other people went up and were able to be more open. I think she expressed something that other minority students have experienced — that a lot of times as a minority student you feel the need to prove yourself that you deserve to be at New College. We don’t have quotas here, there is no affirmative action being taken here. That speaks to a general feeling that is being shared among all these marginalized groups.”

According to many of the students and faculty that the Catalyst spoke to, Brooks’ presence helped dissuade tension that may have built up between students, faculty and staff.

“When she [Brooks] referenced the entire event as a community building event rather than a teach-in, I really liked that framing about why needed it and we hoped to accomplish from it,” Associate Professor of Sociology Emily Fairchild said. “The phrase ‘speak your truth’ is really good at revealing the need to listen to each other and the need for participants to meet each other where they are and address their needs. Our job in community building has to start in recognizing where everyone is coming from and that’s what we got. We have the voices that are here and we need to address the needs of everywhere in the community.”

“I would hope the event on Tuesday made evident was that not just everybody knows how to manage a contentious issue of diversity,” Hernandez reflected. “Not everyone has this expertise, you have to help people [potential diversity oriented staff] acquire it or otherwise you have half-baked programs or situations that lead to more tense situations.”

Students created a 14-page zine that was passed out during the teach-in entitled T+EXT — Transforming and Eradicating Xenophobia. In it, students compiled and wrote essays about privilege, micro-aggressions, the economic advantages to diversity, how to communicate non-violently, how to respond to hearing a negative message and tips on being an advocate. Acuna reflected that the organizers created the zine because they knew that all the topics brought up at the teach-in couldn’t be discussed and to give students background on issues of diversity, discrimination and privilege.

“I think a huge goal of this teach in was to engage not only younger students to continue working on this issue, but also members of the faculty and staff to keep these issue on the forefront of the agenda,” Comiskey said. “We are emphasizing that this teach-in is just the beginning of the conversation and now we have a great opportunity after this to make concrete institutional changes.”

At the end of the event, student organizers asked attendees to write on index cards what they hope to do to help diversity issues on campus and the policy changes that they felt would make the New College community more inclusive. They hope to code these cards and use them in guiding their future actions. They plan to bring presenters and have more workshops on discrimination in the future. “I contacted Jonathon Jordan, who I heard about through Sarah Hernandez,” Acuna said. “He’s presented in congress and he talks about the immediate physiological responses to threats  — reacting in a fight-or-flight manner in circumstances that are not a danger to your body. So we wanted to see if we would present on that sort of defensiveness when talking about privilege, advantage groups and disadvantage groups and justice, because feelings of being under-rewarded and over-rewarded do trigger these reactions. This defensiveness that we are all subject of is something that we need to be aware of. We need to constantly question ourselves and see if we are listening and responding instead of just reacting.”

Students and faculty are involved in making a diversity course part of student’s Liberal Arts Curriculum (LAC) requirements. “I feel like people’s hearts are in the right place and we are all thinking sort of what comes next with the new president,” Professor of French Language and Literature Jocelyn Van Tuyl said.  “I would really like for the students that organized this to be questioning the candidates that come to campus what’s your experience what can you do to bring diversity here. this should be something that is discussed as well because a lot of times what helps us is when someone new shows up – that’s when things start to change a little, [President Gordon] ‘Mike’ Michalson is fabulous in this respect and we are all in mourning. On the other hand, it is an opportunity all else being equal which candidate would be better for us in that respect.”

“I just hope that we get more involvement especially from third, second and first years,” Acuna reflected. “I just want to remind people that we can talk in safe spaces. We can intentionally create spaces where these conversations can happen and we can acknowledge that a lot of these prejudices that play out and create these oppressive dynamics have been inherited and it’s not about blaming the individual, it’s just about holding oneself accountable and that that process can be carried out with a lot of compassion. I think most people at this school are willing to do it in that manner.”