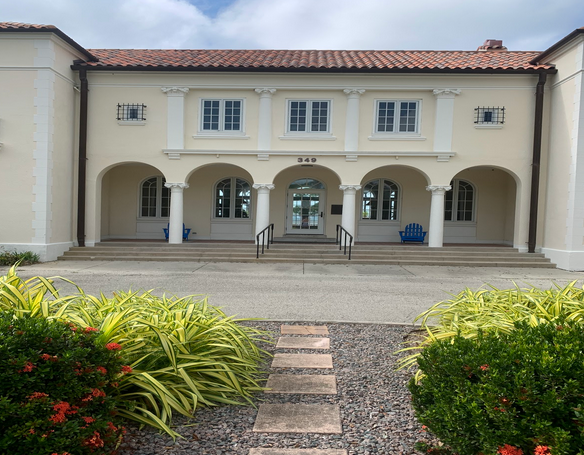 The entrance to Cook Hall, where many administrative offices are located. Photo by Nat Kornblum.

The unique academic contract system at New College has allowed many students to explore a wide variety of interests without the competitive stress of a grade point average (GPA). For others, it can be a financial aid nightmare. The Satisfactory or Unsatisfactory designation of New College courses can leave students who have a rough academic semester without federal financial aid, including statewide programs like Bright Futures and national programs like Federal Student Aid (FAFSA). The recently-formed Completion and Retention Scholarship program aims to help students close this gap, and has since it was first piloted in 2021 by Dean of Studies Dr. Emily Heffernan.

“In my role as Dean of Studies, I was concerned that we were losing students or that students were in a really hard financial situation because their Satisfactory Academic Progress (SAP) status had changed,” said Heffernan.

SAP is a benchmark that the Department of Education (DOE) uses to determine federal and student financial aid based on a student’s academic performance. When a student’s SAP drops to “terminated” status, they are no longer eligible for financial aid.

In the past, New College worked extensively with the DOE to find a place for the school’s unorthodox academic system within their criteria for SAP. At other institutions, student’s SAP status changes based on a low GPA— but at New College, students need a 67% satisfactory completion rate and to complete a degree with 46.5 attempted units to have a SAP score eligible for funding, according to Heffernan.

“I was really concerned about students losing financial aid because of the change in their SAP status, so I asked [Vice President of Finance & Administration] Chris Kinsley  if there were some other funds that we could use to make a completion and retention scholarship program.”

After designating funds for the scholarship program, Heffernan and Kinsley collaborated with Associate Dean of Enrollment Services & Admissions Sonia Wu and Financial Aid Director Tara Karas to create criteria for which students could be eligible for the retention scholarship, and develop a plan for reaching out to these students.

This team reached out to students whose SAP status fell to “terminated” and encouraged them to fill out a financial aid appeal. If this appeal was denied, the students were eligible for the scholarship.

“I do a one-on-one meeting with a student and explain the ins-and-outs of the academic financial interface and then set them up with specific supportive resources,” Heffernan explained.

Essentially, each student receiving the scholarship works to create a personalized plan with Heffernan as well as other on campus resources, such as Assistant Director of Financial Wellness Programs Ceci Linton, the Student Success Center (SSC), and the Counseling and Wellness Center (CWC).

“[Students] have financial support from the college, but then also support in other areas that led to them losing their financial aid in the first place,” Heffernan clarified. “We want to make sure it’s not just a band-aid of ‘Here’s some money,’ but ‘Here’s some financial support and other resources.’ I want to think of the whole student being that we’re supporting.”

“I don’t want there to be a burden on students,” Heffernan later continued. “It’s important to me that the students feel very cared for.”

For third-year student Kayla Kisseadoo, the impact of the scholarship has been pivotal. Kisseadoo started at New College in 2015, but had to take a break after two years.

“I just wasn’t in the space to be here,” Kisseadoo said. “I had too much going on in my life and my mental health wasn’t great. I decided to take some years off to travel and get work experience, and did a lot of growing within that time period.”

After spending some time at a community college, Kisseadoo decided to finish her bachelor’s degree at New College in 2021, only to discover that her financial aid was no longer accessible.

“I didn’t realize the situation that I’d left myself in, and I messed up my SAP requirements which I wasn’t aware of,” Kisseasoo explained. “Coming back, I was pretty surprised to find out that I couldn’t access my FAFSA money, which was what I’d been relying on, and then all of the scholarships I had in 2015 were gone. Hearing all of this was really intense.”

The Financial Aid office referred Kisseadoo to Heffernan, who spoke with her about the retention scholarship. The two came up with an academic plan for Kisseadoo in order to get her FAFSA restored.

However, the future of these impactful scholarships are uncertain.

“The issue is [the funds] are not going to be available in the future, especially if we don’t get performance-based funding,” Heffernan explained.

Despite its precarious future, there is no denying that the funds have been incredibly helpful for students impacted. Last year’s pilot program spent $172,000 on student scholarships, with recipients either graduating or moving their SAP status back to ‘good,’ getting them back in touch with financial aid. This year, half of the allocated $200,000 has been spent on helping students who’ve lost financial aid stay in school.

“Having access to the retention fund has been incredible,” Kisseadoo said.

Students in need of financial aid assistance should reach out to the Financial Aid department to get a better understanding of their options.