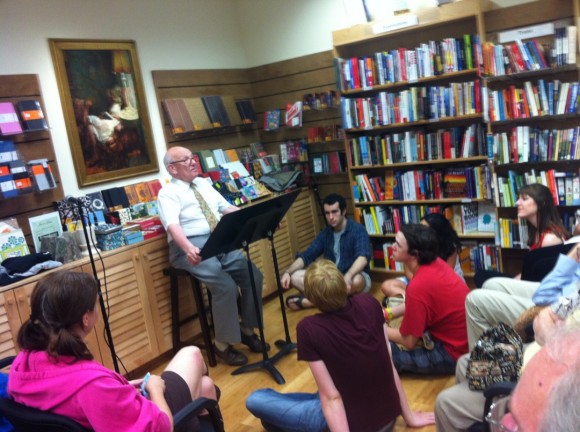 David Raeburn reads selections from his translation of “Metamorphosis” at a Bookstore I in downtown Sarasota.

On Mar. 20, Classics scholar and professor David Raeburn read from his translation of Ovid’s “Metamorphosis” in front of a full audience at Bookstore 1 in downtown Sarasota. Although the day also happened to be Ovid’s 2,055th birthday, his poetry was still very much alive in the packed bookstore as Raeburn delicately read aloud the story of Apollo and Daphne before the captivated audience. Penguin Classics published his translation of all 12,000 lines of “Metamorphosis” in 2004. According to Raeburn, it is an “astonishing collection of stories from mythology, which were inherited from Greek and Roman poets and skillfully bound together by the main theme of metamorphosis, which means ‘change of shape.’”

Raeburn was able to impart his Classics knowledge to Novocollegeans as this year’s participant in the New College of Florida and New College of Oxford faculty exchange program. Apart from being a distinguished translator of Ovid, Raeburn has spent his main career as a teacher of Classics and headmaster in British schools. He has been teaching at New College, Oxford since 1991.

Raeburn spent several weeks with Novocollegeans, helping teach Professor Carl Shaw’s advanced Greek and mythology classes. Before he returned to his home base in Oxford, the Catalyst had the opportunity to speak with him about his time at the other New College and the importance of continuing the study of Classics.

How would you describe your experience here?
Fantastic! I’ve enjoyed it very, very much indeed. I’ve enjoyed meeting some students and sharing some of the things I’m interested in with them.

What would say are some of the differences between New College of Florida and New College, Oxford?
There are quite a lot of differences. One, of course, is that you really are a new college. You’ve existed for fifty years, but New College, Oxford has existed for over 600 years. Some of its buildings are very old and go back to the 14th century. The atmosphere is totally different, and the courses are very different because people who come to Oxford have to choose exactly what their courses are going to be. They are only given options within the framework of what they are pursuing their degree in. You can’t explore different classes. You can’t mix humanities classes with the natural sciences as you can do here, which is a very exciting way of doing it.

What are some similarities?
There are similarities in important aspects. In Oxford, we do believe in some of the same basic things that I have discovered that students do [here], which is very much to think for themselves, to be really interested in what they are studying, to contribute actively in tutorial and class situations and also to recognize their own subject as very much part of a whole unity of knowledge. In some ways we’ve got a terrific lot in common in the way we approach knowledge. We believe in the transmission of culture, which is certainly something that underlies your curriculum here. We have things to learn from the past, as well as prepare ourselves to live in the present. So there are important similarities.

How did you become interested in studying the Classics?
As quite a young boy, I went to school where Latin was taught. I began Latin at eight and then I started Greek at ten. That was at a time when Classics was a very important part of the curriculum, not at the state schools but in our private system. I always enjoyed those languages very much and came to love the literature and what was written in those languages and so I elected to read for the famous classics degree at Oxford. After that I decided I ought to be a teacher. So it was something very much implicit in my education and something I enjoy doing and love. As time has gone on, I’ve fought to keep Greek and Latin alive for their cultural value and also for their transferable skills. It’s very good training of the mind to be learning Greek and Latin. I’ve fought for continuance of that because of course those subjects have been much in decline in Britain as well as they have been in other parts of the world. I think there is still a continued place [for Classics] in the educational system. I’ve been one of those who’ve been active in trying to maintain it both in schools and universities. It’s very nice to see there is some Classics here in New College Florida.

Do you have any upcoming projects?
I’ve got a production of a Euripides play called “Ion.” It is officially a tragedy although it is much more like a comedy. I’m going to direct it with some of my Oxford students in and it will be performed in the wonderful old cloisters of New College, Oxford.